Is "Boston" Rob Mariano the best "Survivor" player ever? 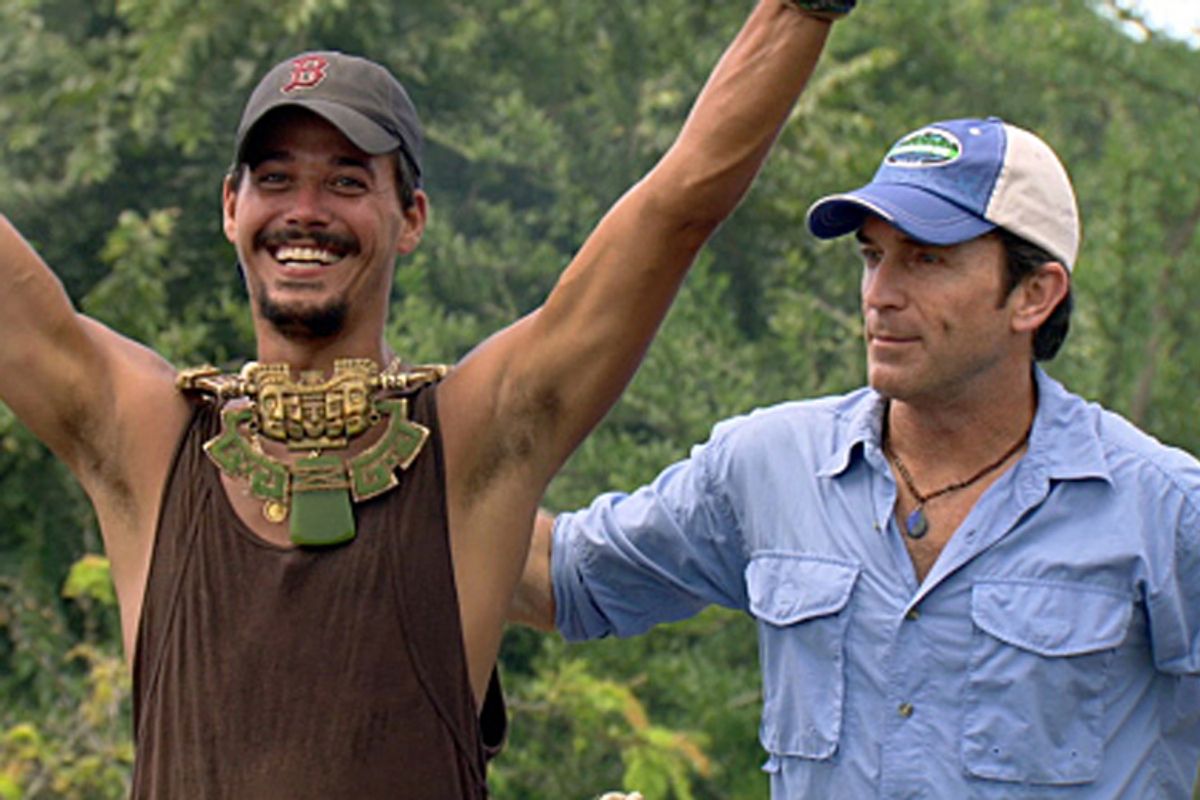 All hail "Boston" Rob Mariano, the best person who ever played this made-for-TV game called "Survivor." He took home the million-dollar top prize during the live finale in New York last night, plus a $100,000 bonus prize for being voted "Sprint's Player of the Season" by viewers. If there had been other prizes, I'm sure he would have taken those, too.

Since the series' U.S. premiere in summer of 2000, nobody has ever dominated the game as thoroughly and consistently throughout a season as Mariano did this year. It was his fourth time playing the game. In his second outing on "Survivor: All-Stars," he was beaten by his future wife, Amber Brkich, to whom he proposed before that season's votes were read. Brkich was in the studio last night with their two young children. "It was Amber that encouraged me to come back," he told the camera in one of his final interviews on the Nicaragua set, losing his composure as he spoke. "She believed in me. It's 'cause of her. I feel like whatever happens now, I'm OK, even if I don't win. Which is ironic, 'cause the only reason I ever wanted to come back and play again was to win."

Mariano's greatest gift was his ability to make every player he allies himself with feel as though they were the confidant and co-conspirator who was special and wonderful and different from all the others and would never, ever be betrayed. And then: Wham! He was good at challenges (especially puzzles) and had a few other master strokes up his sleeve (such as holding an immunity idol in reserve, as insurance against the eventuality that somebody previously simpatico with him would turn on him). But his skill at politicking was what ultimately got him through.

His dominance was so total that after a certain point, it became obvious not only that he was probably going to win, but that there would be no traditional suspense this season -- just the more detached sort of excitement that comes from watching a master do his thing.

In the final weeks, while Mariano fended off challenges from players who finally started to grasp the almost completely psychological nature of his game and tried in vain to counter it, I was reminded not of past "Survivor" seasons, or of traditional sports, but of what it felt like to be a kid watching my grandfather build one of his magnificent birdhouses. The seams where the pieces joined didn't even need to be sealed to keep the water out because the thing was already watertight. That was Mariano's game this year: watertight.

This season is the best argument I've seen for the proposition that the CBS series is a great new national pastime, with a complexity and metaphorical richness that no other so-called reality series provides -- and that its most successful contestants are hybrids of mental and physical athletes, jockeying for advantage on a real-time chessboard with human pieces. Mariano's gift is his understanding that once you get onto the island or into the jungle or wherever "Survivor" happens to be taking place, what happens isn't real life, but an intense, abstracted version that's divorced from real-world morality, no matter how stridently some players insist otherwise.

From its first season, executive producer Mark Burnett was always explicit that there were just two rules: no threatening or committing physical violence against another contestant, and no collaborating to split the prize money. As Mariano himself said during the live interview following the verdict, players tend to get confused about that because they and the other players are human beings, the friendships (or rivalries) that develop during competition feel real and in some sense are real, and the whole experience is so rarefied and overwhelming that the people who take part in it feel that nobody can ever understand them except another "Survivor" contestant. (Thus Mariano's marriage to Brkich -- and "Redemption Island" cast-member David Murphy's on-air proposal last night to a a rather annoyed-seeming Carolina Eastwood, a contestant on 2009's "Survivor: Tocantins.")

But it really is just a game. You can't go into it clinging to a personal code of honor or a religious conviction and expect to win. And if you get voted off "Survivor" and start whining about how this player or that player was deceptive or insincere, you sound dumb. You might as well join a poker game and then complain when another player successfully bluffs you. "B-b-but you LIED to me! You made me think you had a good hand, and you didn't!"

Some of the tirades-posing-as-questions during the final vote proved, beyond a shadow of a doubt, that the people who lost to Mariano deserved to lose, because they had failed to grasp what the game was about (physical endurance; long-term, chess-like strategizing; politics or gangland-style alliance building) and were judging Rob by irrelevant, self-serving, hypocritical standards.

"All the people that you betrayed are having a hard time understanding who you really are," said Matt Elrod, the devout Christian who spent much of the series in solitude on Redemption Island, vanquishing other rejectees and trying to find his way back into the main competition. "None of you played a respectable game," said Julie Wolfe, chastising Mariano and the other two finalists, Phillip Sheppard and Natalie Tenerelli, both of whom had no problem admitting that they made it to the end by being unswervingly loyal to Mariano. Then, singling out Tenerelli, she said, "Do you think your parents would be proud of the way that you played the game? Because if you were my daughter, the answer would be no."

What show did these people think they were on? At least the elapsed time between the final tribal council vote and the reading of the verdict mellowed them, and led them to admit what was already apparent to anybody who'd watch so much as a single episode this year: "Survivor" is a great and challenging game, and Mariano is the best who ever played it.