The U.S., Israel, Syria and the politics of distraction 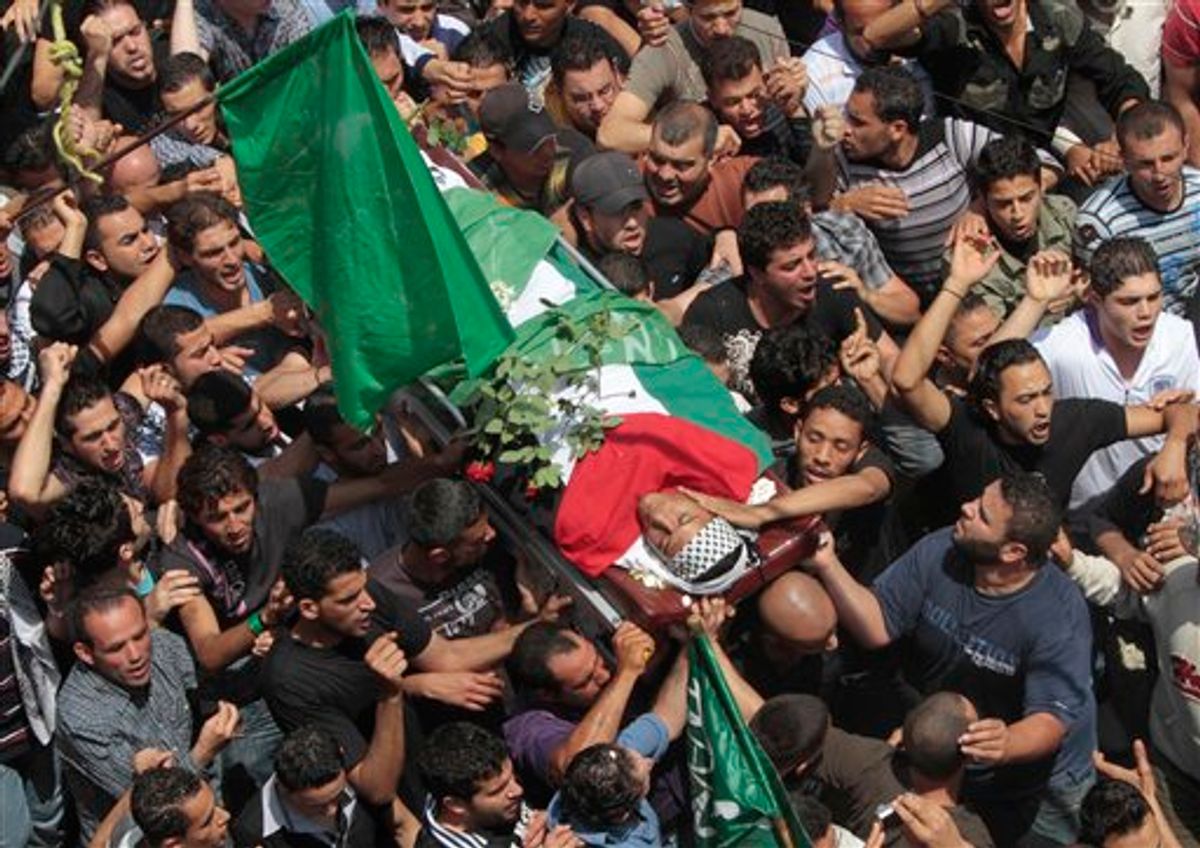 Palestinian mourners carry the body of a Palestinian man who killed when Israeli soldiers opened fire on Sunday at protesters who approached the northen Israeli border with Lebanon, during a funeral procession at Ein el-Hilweh Palestinian refugee camp, in the southern port city of Sidon, southern Lebanon, on Monday May 16, 2011. Israeli troops clashed with Arab protesters along three hostile borders on Sunday, leaving as many as 12 people dead and dozens wounded in an unprecedented wave of violence marking the anniversary of the mass displacement of Palestinians surrounding Israel's establishment in 1948. (AP Photo/Mohammed Zaatari) (AP)
--

Both Israeli and U.S. officials have already condemned Syrian involvement in the marches -- a move that deserves careful consideration.

"This appears to be a cynical and transparent act by the Syrian leadership to deliberately create a crisis on the border so as to distract attention from the very real problems that regime is facing at home," said a senior Israeli government official who declined to be named.

It seems apparent to us that this is an effort to distract attention from the legitimate expressions of protest by the Syrian people, and from the harsh crackdown that the Syrian government has perpetrated against its own people.

Carney emphasized that the U.S. administration was "strongly opposed to the Syrian government's involvement in inciting yesterday's protests in the Golan Heights."

There is every reason to be skeptical of the Syrian government's motives to incite unrest at the Israeli border. As Radwan Ziadeh, a Syrian dissident and visiting scholar at George Washington University, told the New York Times:

It's a message by the Syrian government for Israel and the international community: If you continue the pressure on us, we will ignite the front with Israel.

The White House and the Israeli Defense Force highlight Syrian President Assad's motives, however, without  explicit recognizing the fact that 470,000 Palestinian refugees currently reside in Syria. This is about 10 percent, according to UNRWA figures, of the Palestinian refugee population. For Assad to take advantage of these refugees for political gains is despicable; for the U.S. and Israel to focus on Assad in the wake of huge, coordinated protests by Palestinians and their supporters across the Middle East is perhaps more troubling still.

The Israeli officials' and Carney's comments point to a clear fulcrum the U.S. and Israel are pushing; the issue of Palestine, they seem to suggest, is separate from problems igniting revolt around the Arab world and should not be conflated or used to distract.

It is the same argument made by Josef Joffe of the Freeman-Spogli Institute for International Studies at Stanford in a recent Wall Street Journal opinion piece. He wrote:

These revolutions [the Arab Spring] have unfolded without the usual anti-American and anti-Israeli screaming. It's not that the demonstrators had run out of Stars and Stripes to trample, or were too concerned about the environment to burn Benjamin Netanyahu in effigy. It's that their targets were Hosni Mubarak, Zine el Abidine Ben-Ali, Moammar Gadhafi and the others -- no stooges of Zionism they. In Benghazi, the slogan was: "America is our friend!"

The men and women of the Arab Spring are not risking their lives for a "core" issue, but for the freedom of Egypt, Tunisia, Libya and Syria.

The risk with such a logic is that it ignores the fact that, in an Arab world mobilizing for freedom and new notions of nationhood, Palestine cannot be sidelined ("core" issue or not). Western observers, wishing to only inscribe a narrative of Muslim nations fighting for democracy within their own borders, will struggle to ignore the fact that thousands of protesters from different countries all marched Sunday, attempted to cross borders of Israeli occupations and united in support of Palestine.

The mass mobilizations across the Middle East this weekend make it clear: We cannot talk about the Arab Spring and laud the bravery of young people taking to the streets to call for democracy and ignore the Palestinian question. As one Egyptian activist, Muhammad Abdel-Salam, 22, told the Jerusalem Post: "The victory of our revolution will not be complete without the liberation of Palestine."

The New York Times called Sunday's actions an "unprecedented wave of coordinated protests" and noted that this year's Nakba demonstrations were "inspired by recent popular protests around the Arab world. Here too, word about the rallies was spread on social media sites." The very Egyptian youth alliance that was influential in the ousting of the Mubarak regime organized 20 buses to take protesters to Sinai to mark Nakba, but the Egyptian authorities restricted access to the area.

Thousands of protesters demonstrated on Sunday, most of them without incitement from Syria. However, the White House and the IDF, by focusing on Assad after Sunday's actions, invite charges of distraction politics themselves.