Our overblown paranoia about the Internet and teens

As a pediatrician, I'm often asked about the effects of technology on kids. Here's what parents should know 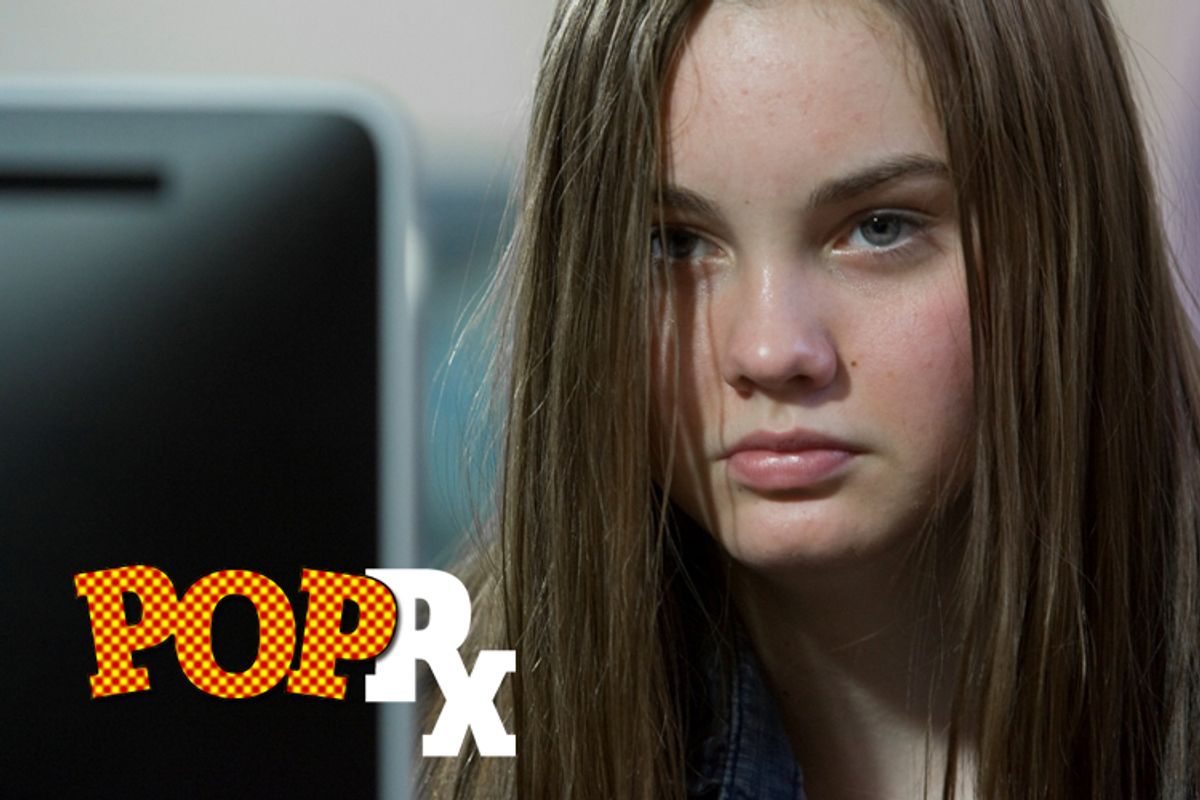 In David Schwimmer's recent film "Trust," a teen girl falls for a boy she meets on the Internet. But when they agree to meet face to face, she discovers he's an adult man approaching middle age. By now, we can all see the horror that is coming: The young girl is raped by a pedophile, and her world collapses into a million little pieces.

"Trust" is the latest film to stir our deep desire to protect children from the evil that lurks on the Web. Practically speaking, that may mean taking away teens' cell phones, sitting beside them as they use the computer, or buying filtering software. It's understandable that -- like television, movies and rock 'n' roll before it -- the Internet has become a lightning rod for parental anxiety. And as a pediatrician, I can assure you doctors have been pulled into this debate about "e-risks," as I call them: Internet pedophilia, sexting, cyberbullying and, most recently, "Facebook depression" (more on that later). Parents worry about how their teen's use of the Web is affecting their health. Do they need a prescription sleep aid, or is all that late-night gaming making it hard to sleep? Do they have ADHD, or do most kids IM 50 people while they're doing their homework? The American Academy of Pediatrics issued a report in March on the risks posed to youth on the Internet and how doctors like me should address the issue.

Yet accurate numbers about how often teens are exposed to or affected by e-risks don't exist. You may, for example, learn that sexting is rare and that only 4 percent of teenagers have sent sexually explicit messages or images on their cell phones, but another survey may tell you the number is as high as 30 percent. Disparate numbers exist for other e-risks as well, mostly because these surveys have wildly variable definitions of what they're measuring (the more acts of cruelty you include under your description of "cyberbullying," the more likely you'll get a "yes" from your subjects) as well as the age range of subjects.

Sameer Hinduja is a professor of criminal justice at Florida Atlantic University, whose expertise is cyberbullying and other e-risks. His research suggests that about 20 percent of youth have been either victims or perpetrators of cyberbullying. "That's not a statistic we should ignore, but it's also not an epidemic either," he said. In a report to the FCC written by researchers at Harvard, the authors noted that the prevalence of cyberbullying is similar to that of offline bullying. The report also notes that contrary to popular perception, cyberbullies are rarely anonymous. Most online bullying victims know their perpetrators, and half are in school with them. Perhaps the most important question to ask is whether kids who are bullied online are in any more danger than those bullied in the schoolyard. Hinduja believes they are not.

There are similar perception and reality discrepancies with online sexual predators. Barry Glassner, the president of Lewis and Clark University, is a sociologist whose expertise is media studies. In 2000, Glassner wrote a respected book called "The Culture of Fear." In an updated version of the book released last year, he looked at the well-publicized statistic that "1 in every 7 young people has been sexually solicited online," which came from a University of New Hampshire study seized upon by child advocates who spread it in the name of Internet safety. But Glassner points out that less than 10 percent of those solicitations were between adults and teens. In fact, almost half of cases were teens soliciting other teens. (In the rest of the cases, the ages were unknown.) That doesn't necessarily make it acceptable, but is it really that different from two teens passing notes during English class?

Online sexual predation, similarly, isn't that different from what happens away from the Web. Research studies do not show an increase in overall sexual predation as a result of Internet use among young people. The kids most at risk of online harms are the same as those at risk for offline harms -- victims of sexual or physical abuse, or children in unstable homes, for example. Finally, our schema of a "Trust"-like predator as an older man preying on a child distracts from the reality that most sexual solicitation of minors is done by other minors.

Next, we have concerns about the association between Internet use and mental illness. The most recent buzz term: "Facebook depression." If you Google that term you might be led to believe that letting a teen use Facebook or other social network is going to spark a clinical melancholy. Yet there's no evidence to support such a medical problem. Sensible reports about the story emphasize that excess time on social networks may just be a contemporary symptom of depression and not, as the terminology would suggest, that social media is the latest public health scourge.

All these parental panics run contrary to an idea that has much more in the way of expert consensus: that the Internet actually helps teens mature by allowing them to connect with others, learn and even advocate for a better world. Scholars for the Digital Youth Project at the MacArthur Foundation interviewed 800 kids and spent over 5,000 hours observing them in their online lives over a three-year period. The sum of that research: We should be thankful when kids go online, not afraid.

Most young people, they found, spent time online connecting with people they know (and not total strangers who could pose a danger). They gravitated to topics related to sports, religion, school and other local activities in their lives. In contrast with the stereotype that teens waste time online, researchers saw them finding new ways to express themselves and pioneering new rules of social behavior through blogging, movie making and podcasting. They became more media savvy. Another survey found the Internet to be a great place for youthful social activism. Fifty-four percent of teens surveyed said they have joined an online community on a social network in support of a cause, and 34 percent said they had volunteered for a campaign, nonprofit organization or charity online. There's no better example of this than the "It Gets Better Project," supporting the right of gays and lesbians to feel safe at school and in their communities.

These points aren't meant to minimize real online dangers, and they don't necessarily prove that the benefits outweigh the risks. But it's critical to keep perspective (something the AAP clinical report does very well). As a parent and a physician, I understand our instincts can't help but gravitate toward the worst-case scenarios, like that in "Trust." On the other hand, if we don't rationally understand the breadth and scope of e-risks, or what's lost if we hide our children from the Web, then how can we responsibly address the problem?

That question led me back to Sameer Hinduja. What, I asked him, are we supposed to do about minimizing e-risks and getting the most of the Web for our kids? He was enthusiastic about the recommendation that pediatricians address the issue with families. But on that issue, I'm less inclined to agree. Prevention is the best medicine, but if I had to add up all of the "preventive advice" I'm supposed to run through with parents and kids, a visit to the doctor would take hours instead of the 15-20 minutes patients usually get.

More importantly, I'm still not sure what to do with the information once I have it. If a teen tells me he is sexting, should I tell his parents? Should I call the police? Or do I, as some have suggested, treat it as harmless, healthy flirtation, or even a form of safe sex? Admissions of sexual activity by teens to their doctors are, under most circumstances, confidential and protected by law in California. There are ethical, medical-legal and regulatory landmines that we aren't even close to sorting out.

Hinduja agreed that, for now, there are no easy answers to minimizing e-risks in or out of the doctor's exam room. He and many other experts believe the best solution is to focus on education and prevention instead of draconian measures like constant monitoring of Internet activity, cutting kids off from the Web, or applying harsh laws to punish them for what may be digressions of youth. And while it might be tempting to install Internet filtering or blocking software, they certainly won't help control a teen's smart phone. The cat and mouse game between technology and teens often moves too quickly for software companies to keep up.

"Don't demonize Facebook or other sites, or kids will just tune you out," he said. "We need to get comfortable enough to teach young people to use the Web responsibly." Hinduja has also helped create a nonprofit, nonpartisian website that provides sensible information on e-risks for youth.

Ultimately, it's more sensible to teach our kids to be good digital citizens instead of racing to protect them from every tweet, text and graffiti on their Facebook wall. Good citizenship isn't a radical aspiration at all. In that sense, the Internet isn't the brave new world it's cracked up to be. Rather, with all of its opportunities, choices and risks, it's just an extension of the everyday world.