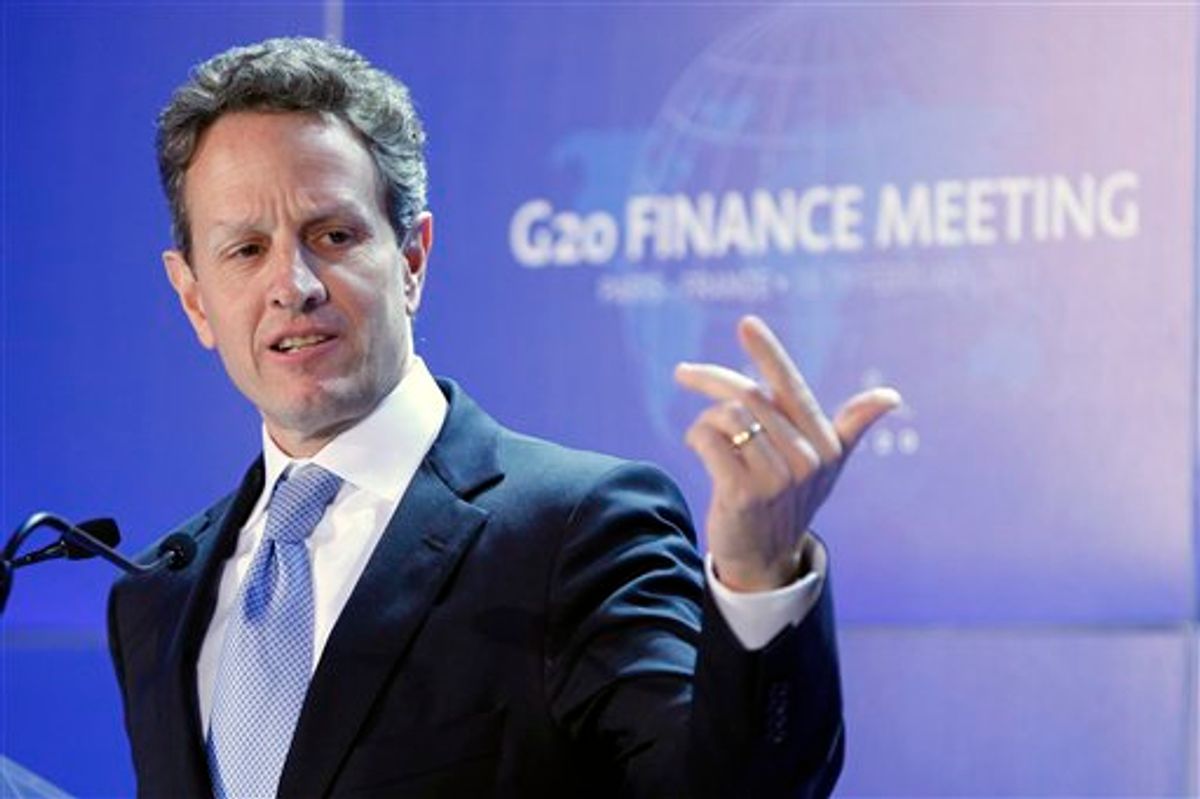 FILE - In this Feb. 19, 2011, file photo U.S. Treasury Secretary Timothy Geithner answers questions at the closing press conference of the G20 Finance summit in Paris. Five years and one financial crisis since the United States and China commenced regular high-level economic talks, fast-growing Beijing might have the upper hand Monday, May 9, 2011, in the latest round of discussions between the world's two biggest economies. While analysts don't foresee major breakthroughs at the talks Monday and Tuesday, China's expanding economic might will give it greater leverage now. (AP Photo/Francois Mori, File) (AP)
--

Treasury Secretary Timothy Geithner said Monday that he will immediately halt investments in two big government pension plans so the government can continue to borrow money.

Geithner informed Congress of his decision in a letter stating that the government had officially reached its $14.3 trillion borrowing limit. He repeated a warning that if lawmakers do not increase the borrowing limit by August 2, the government is at risk of an unprecedented default on its debt.

The debt limit is the amount of money the government can borrow to help finance its operations. The nation has reached its debt limit because the federal government has grown accustomed to borrowing massive amounts of money. The latest estimate is that it borrows 40 cents for every dollar it spends.

Republicans have said they will not vote to raise the borrowing limit until Congress and the White House agree on a plan to reduce the deficit through spending cuts. House Speaker John Boehner last week those cuts should be larger than any increase in the debt ceiling.

The deficit is the difference between what the government spends and what it takes in through taxes and other revenue. The Congressional Budget Office projects that this year's deficit will total $1.4 trillion. That's would nearly match 2009's record imbalance and mark the third straight year in which the federal deficit has exceeded $1 trillion.

Vice President Joe Biden is holding negotiations with lawmakers over the types of deficit-cutting measures that need to be approved to win congressional approval of a higher debt limit.

Even though the government has reached its official borrowing limit, Geithner said unexpected revenue and bookkeeping maneuvers will allow the Treasury to continue auctioning debt for another 11 weeks.

Geithner has suspended pension payments in the past when Congress has held off raising the debt limit. The money that the two pension funds will lose will be replaced when Congress votes to raise the borrowing limit.