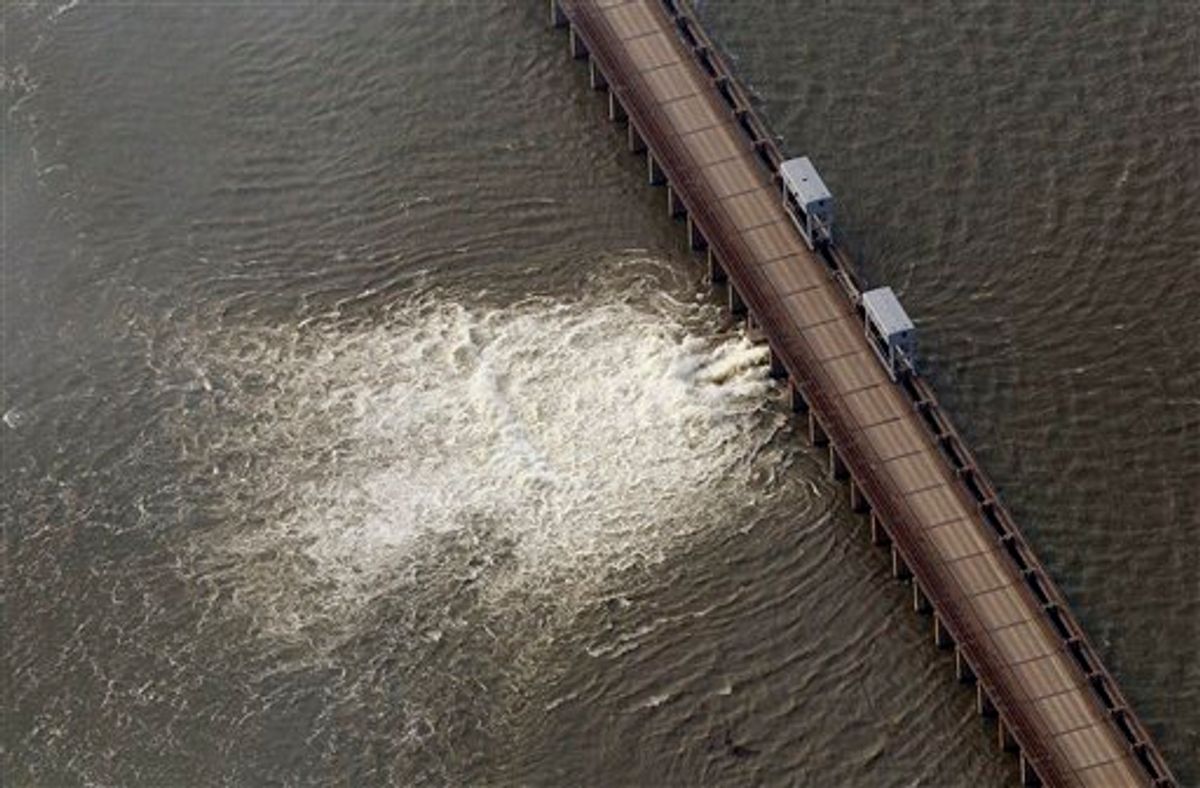 Water diverted from the Mississippi River spills through a bay in the Morganza Spillway in Morganza, La., Saturday, May 14, 2011. Water from the inflated Mississippi River gushed through a floodgate Saturday for the first time in nearly four decades and headed toward thousands of homes and farmland in the Cajun countryside, threatening to slowly submerge the land under water up to 25 feet deep. (AP Photo/Patrick Semansky) (AP)
--

Renee Ledoux cried when the National Guard and sheriff's deputies showed up at her front door and warned her she needed to get out to avoid water gushing from the Mississippi River after a floodgate was opened for the first time in four decades.

But by the 5 p.m. deadline Sunday, the 44-year-old Ledoux and her boyfriend Billy Hanchett decided to ride it out one more night on air mattresses inside the empty home in Krotz Springs. They have a camper they plan to stay in on a friend's property outside the flood zone.

"We really don't want to go," Hanchett said. Ledoux added that she felt blessed that they had the camper because a lot of others have nowhere to go except shelters.

Meanwhile, President Barack Obama planned to fly to Memphis, Tenn., on Monday to meet with families affected when the river flooded there as well as local officials, first responders and volunteers.

Deputies all over Louisiana Cajun country were warning residents to head for higher ground and most heeded it, even in places where there hasn't been so much as a trickle, hopeful that the flooding engineered to protect heavily populated New Orleans and Baton Rouge would be merciful to their way of life.

Days ago, many of the towns known for their Cajun culture bustled with activity as people filled sandbags and cleared out belongings. By Sunday, some areas were virtually empty as the water from the Mississippi River, swollen by snowmelt and heavy rains, slowly rolled across the Atchafalaya River basin. It first started to come, in small amounts, into people's yards in Melville on Sunday. But it still had yet to move farther downstream.

The floodwaters could reach depths of 20 feet in the coming weeks, though levels were nowhere close to that yet in the towns about 50 miles west of Baton Rouge.

About 11 miles north of Krotz Springs in the town of Melville, Mary Ryder, her fiance and her fiance's father were loading up a trailer with as many belongings as they could fit to drive over the levee to stay with relatives on the other side of town. Ryder lives in a mandatory evacuation area, where water is starting to creep into backyards. They worried about what might happen if a broader evacuation is ordered.

"They say we have to leave town. We have nowhere to go," she said. "What are we going to do? I have no idea. We need help up here."

The spillway's opening diverted water from the two major Louisiana cities -- along with chemical plants and oil refineries along the Mississippi's lower reaches -- easing pressure on the levees there in the hope of avoiding potentially catastrophic floods.

That choice angers John Muse, who drove from Lafayette to Melville to help his 86-year-old father-in-law Clovis Cole move his belongs. He said officials seem to be paying more attention to the concerns of Baton Rouge and New Orleans than people who live in the basin.

"They hurt a lot of feelings by putting that water in here like they did," he said. "What's happening here, I'll tell ya, it's not fair."

In Butte LaRose, some 50 miles downstream from where the Morganza spillway was opened, Chalmers Wheat, 54, was among the few left -- and even he was headed for his father's home in Baton Rouge outside the flood zone. He and his twin brother, Chandler, were making a few final preparations to protect his home with plastic lining and sandbags.

It will be at least a week before the Mississippi River crest arrives at the Morganza spillway, where officials opened two massive gates on Saturday and another two Sunday. There are 125 in all. The Mississippi has broken river-level records that had held since the 1920s in some places.

The Army Corps of Engineers has taken drastic steps to prevent flooding. Engineers blew up a levee in Missouri -- inundating an estimated 200 square miles of farmland and damaging or destroying about 100 homes -- to take the pressure off floodwalls protecting the town of Cairo, Ill., population 2,800.

The Morganza flooding is more controlled, however, and residents are warned each year that the spillway could be opened. A spillway at the 7,000-foot Bonnet Carre structure in Louisiana also has been opened.

Just outside Krotz Springs, 23-year-old Jake Nolan said National Guard troops knocked on the door of his home in a subdivision to tell his mother of the evacuation order. He said they advised her to have white towels and have access to the roof if they planned to ride it out -- presumably in case of a rescue -- though that didn't appear to be part of any official instructions. And besides, he didn't need an order to leave with his wife and three children.

"I don't want to be stuck here if the water does get bad," said Nolan, who planned to stay with a sister in Port Barre.

It seemed animals didn't want to be stuck anywhere: Deer, hogs and rabbits have started running from the water flowing near the floodgates, said Lt. Col. Joey Broussard of the Louisiana Department of Wildlife and Fisheries. An electronic sign on Interstate 10 warned of a possible animal exodus: "Wildlife crossing possible. Use caution," it read.

Despite the mandatory evacuation order, Krotz Springs town clerk Suzanne Bellau said it was unlikely the sheriff's office would force people to leave. For most, the worst part was wondering what may happen. National Guardsmen were building a second levee to bolster protection for the town.

"It's the unknown, that's the problem," Bellau said. "Is it going to come into their homes or not? And the people who are leaving, what are they coming back to?"