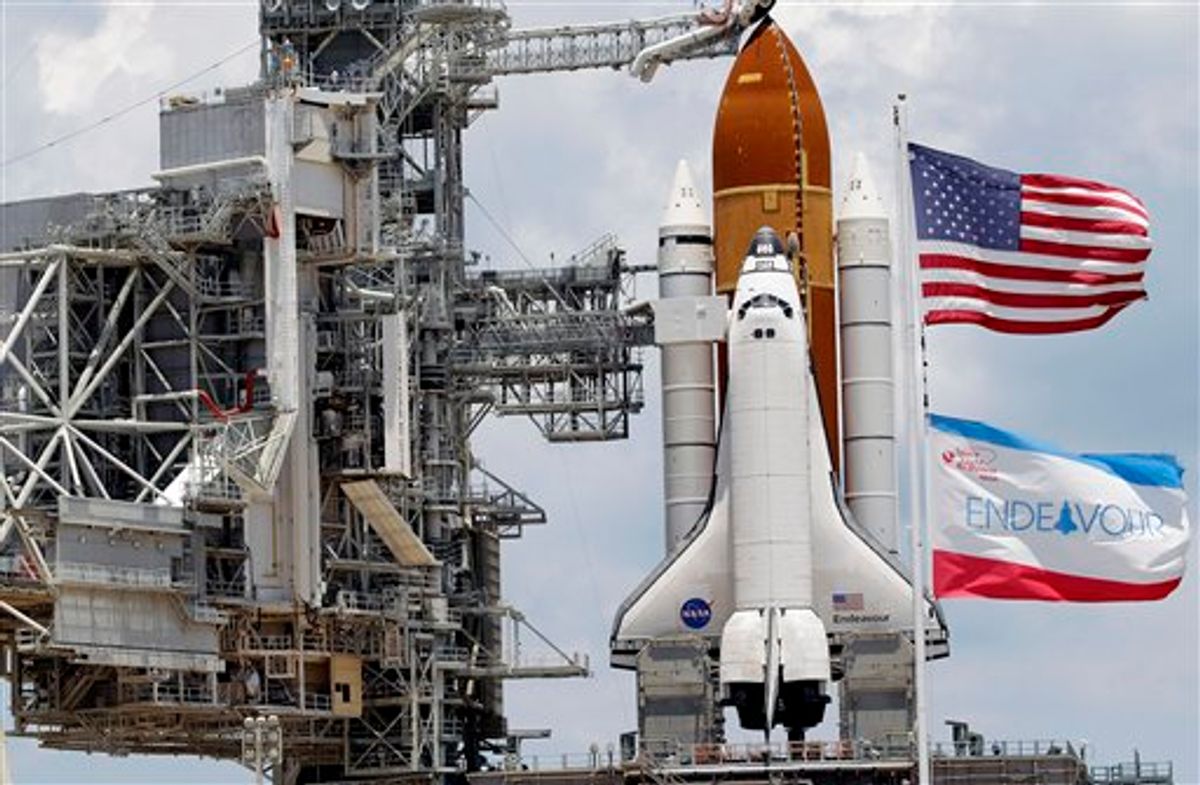 The U.S. and orbiter flags wave in the breeze as the space shuttle Endeavour sits on Launch Pad 39-A at the Kennedy Space Center in Cape Canaveral, Fla., Sunday, May 15, 2011. Endeavour, and her crew of six astronauts, is scheduled to lift off Monday morning on a 16-day mission to the international space station. (AP Photo/Chris O'Meara) (AP)
--

It was a moment that a few short months ago seemed so improbable: Rep. Gabrielle Giffords watched her husband power into space on the shuttle Endeavour. In person.

Still recovering from a devastating wound to the head, the Arizona congresswoman was at Kennedy Space Center on Monday to witness Mark Kelly and his five crewmates blast off and head to the International Space Station. She watched in private -- as do all crew families.

What had already been a historic event -- the second-to-last space shuttle flight and the last for Endeavour itself -- had become the Gabrielle Giffords-Mark Kelly saga after the Jan. 8 shooting.

Since the assassination attempt in her Tucson, Ariz., hometown, Giffords has been shielded from public view: during her two weeks in intensive care, her transfer to Houston, and the weeks since at a rehab hospital. Her doctors last spoke publicly about her progress in early March, and the only recent details have come from select interviews granted by her husband, staff, and those caring for her.

The night before launch, Kelly bid Giffords goodbye at the exclusive beachfront house the crew uses before launch.

Her doctors say she has made "leaps and bounds" in what will be a long recovery. The bullet pierced the left side of Giffords' brain, thus affecting speech and movement on her right side. The Arizona Republic reported last month that she was speaking mostly in single words or declarative phrases, could stand and walk on her own, pushing a grocery cart through the rehab center's hall as therapy.

"Her personality's 100 percent there,' Kelly told CBS News. "You know it's difficult for her to walk. The communication skills are difficult at this point."

No photos of Giffords have been seen. According to the Arizona newspaper, her hair is short and there's a thin scar across her forehead. She wears a helmet to protect her head; a piece of her skull was removed to allow for swelling. A grainy TV video purportedly showed her slowly going up stairs of a small airplane to fly to Cape Canaveral for her husband's first launch attempt last month.

The tragic event that catapulted the relatively unknown congresswoman and anonymous astronaut into America's sweethearts, Gabby and Mark, came a few days after the Democrat started her third term in Congress.

At a routine meet-and-greet with constituents outside a supermarket, a gunman opened fire, killing six people and wounding Giffords and 12 others in the crowd. A 22-year-old suspect faces 49 federal charges and a mental competency hearing.

The odds said she wouldn't make it, but she did. After brain surgery and two weeks in intensive care, she was taken to Houston where her husband lives and trains. The odds suggested Kelly couldn't continue with his shuttle mission, but he did. Four weeks after the shooting, he said he would fly.

Might Giffords be well enough to attend his launch -- as she had twice before?

"Absolutely. I have every intention that she'll be there for the launch," he told reporters in February.

While she was in daily rehab, he resumed training, visiting her before and after work. In a way, their days were similarly filled with intense and repetitive drills. She was told about the shooting -- which she doesn't remember -- and the deaths, but not all the details.

By the end of April, doctors said Giffords was doing well enough to fly to Florida -- but the shuttle was grounded hours before liftoff.

When NASA was ready to try again, Giffords was there. Again. This time the hard work, the preparations -- both for NASA and Giffords -- paid off with a thunderous launch.

Monday's launch also means Kelly will be home in Houston after the 16-day mission just in time for Giffords' 41st birthday on June 8.

Giffords, who is on the House committee that oversees NASA, had an interest in space issues before she met Kelly on a trip to China in 2003 when she was serving in the Arizona Legislature. They were married in 2007 after a long-distance romance. She attended his launches in 2006 and 2008.

As is custom, Giffords will again pick wake-up music for Kelly at least once while he's in orbit, maybe more. Previously, she selected "Beautiful Day" from U2.

At his last liftoff, she told The Associated Press that she was happy, excited and worried all at the same time. "It's a risky job," she said. Only when the shuttle has returned to Earth "you can sort of exhale and relax and know that your loved one's safe."

Right after that launch, she was presented with red roses and a card from her husband.