When Maria Shriver stood by her man

Would Arnold have ever been governor if his wife hadn't been so willing to tell voters, "It's OK"? 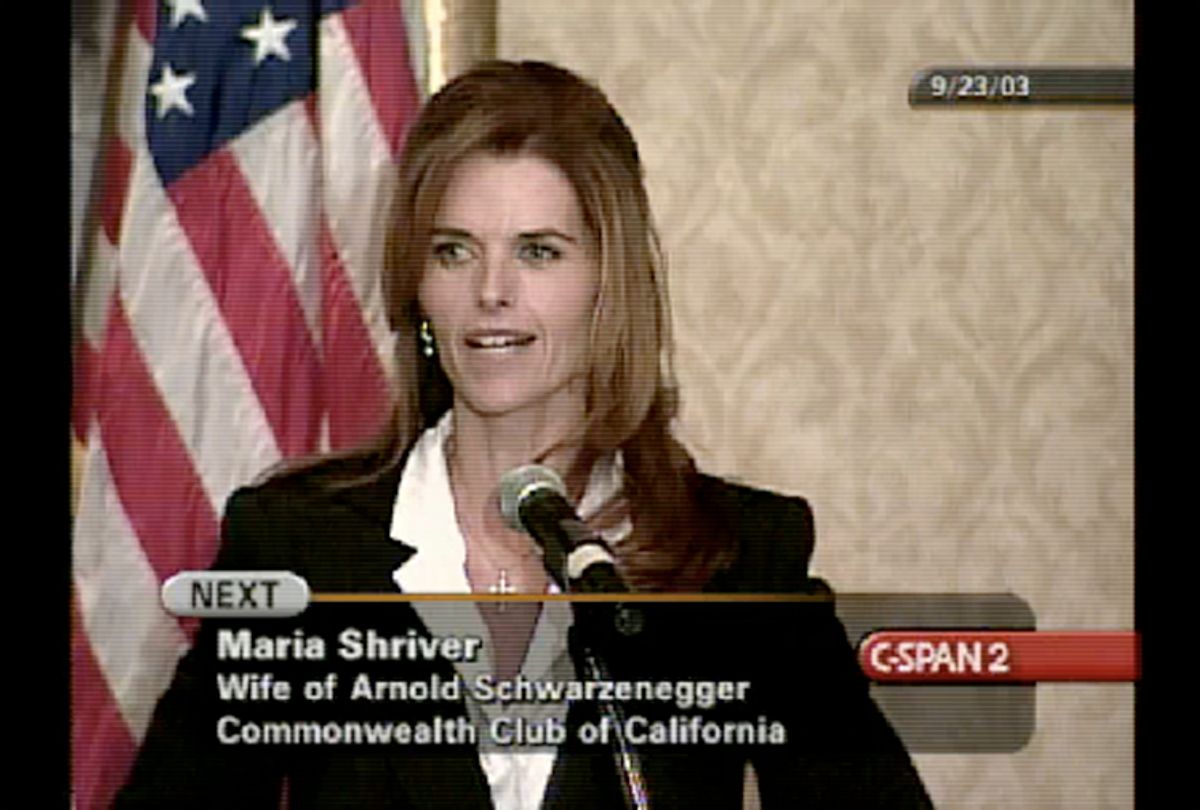 The revelation that Arnold Schwarzenegger fathered a child with a longtime member of his household staff more than a decade ago -- and before he entered politics -- would seem to help explain the recent news that he and his wife, former NBC journalist Maria Shriver, are splitting.

But it also casts a new light on the biggest favor Shriver ever did for her husband's career, when his effort to claim the top job in America's largest state was in danger of crumbling apart.

It was in the final days of September 2003 that Schwarzenegger deigned to participate in a debate for the first time in his political career. He did it because he had to, not because he wanted to: He had pulled ahead in California's free-for-all gubernatorial recall contest, but doubts about his intellect and basic grasp of public policy remained. He had to prove he could sit on a stage with Serious People and not make a fool of himself.

One of his long-shot opponents was particularly determined to force Schwarzenegger into a campaign-changing gaffe. But as he effortlessly and humorously deflected one attack after another -- telling her, for instance that she needed to try "a little more decaf" -- she grew frustrated and lashed out at him.

"You know," Arianna Huffington told Schwarzenegger, "this is completely impolite. And we know how you treat women."

Huffington, who was then in the liberal crusader phase of career, never had a chance of winning the election. But by invoking the "woman" issue in such a public venue -- with Schwarzenegger onstage with her -- she helped mainstream chatter that had previously been relegated to niche publications and unreported rumors. An interview with the defunct Oui magazine from 1977, for instance, had resurfaced, with a 30-year-old Arnold happily discussing his group sex habits. And a more recent piece in Premiere had suggested that Schwarzenegger had groped several women. It's not that major media outlets had ignored this; but it had all been vague and dated enough for Schwarzenegger -- and Shriver, his wife of 17 years -- to ignore it and for the press to spend most of its time and energy on other topics.

But that all changed in the next two weeks. As the Oct. 7 recall election date drew closer, it became clear that Californians were poised to a) vote to remove Democrat Gray Davis from office; and b) elect a bodybuilder-turned-movie star to replace him. The only thing that could disrupt this would be more woman problems for the front-runner. Pundits speculated over how much damage had been done by what had already come out, and wondered if the candidate might be wise to offer some kind of public reassurance to voters -- or if that would only make matters worse. Rival campaigns pleaded with the press to dig deeper and ask more questions.

Then came the bombshell: A damning 3,500 word front-page Los Angeles Times story on Oct. 2 that detailed the accounts of six women who claimed they were groped by Schwarzenegger between 1975 and 2000. The alleged incidents had taken place on movie sets and in studio offices and gyms. Two of the women allowed their names the be used; others were granted anonymity because they feared doing so would threaten their Hollywood careers.

Now the issue was too big for the candidate to ignore. At a campaign rally that day, Schwarzenegger said:

"Yes, I have behaved badly sometimes. Yes, it is true that I was on rowdy movie sets and I have done things that were not right which I thought then was playful, but now I recognize that I have offended people. And those people that I have offended, I want to say to them, 'I am deeply sorry about that and I apologize, because this is not what I'm trying to do.' When I'm governor, I want to prove to the women that I will be a champion for the women."

But the floodgates had opened. Two days later, the Times followed up with three new accounts of alleged abuse, two from women who had worked with Schwarzenegger on the 1988 movie "Twins," one a CNN intern. A day after that -- the Sunday before the election -- the paper printed four new accounts. There were now detailed allegations from more than a dozen women of what seemed to amount to a quarter-century of rampant sexual harassment and physical abuse from Schwarzenegger.

Now the issue was too big for the candidate's apology to be sufficient: He needed his wife, a well-known, well-liked celebrity in her own right, to stand up for him -- to tell women and other concerned voters that, as bad as this all looked, they didn't have to believe it. And so, as Schwarzenegger denied the fresh allegations and accused the Times of wanting to keep Davis in office, Shriver launched a last-minute campaign of her own: the "Remarkable Women" tour, providing emphatic testimony about her husband's fundamental decency.

"His open-mindedness, willingness to listen and tolerance is exactly what the doctor ordered. I wouldn't be taking my time, I wouldn't have left my job that I love, I wouldn't have done any of this if I didn't believe in this man. And as a Democrat, I'm totally comfortable supporting him because he understands people, he has empathy, he has compassion and he has incredible courage to put himself and everything he's fought for out on the line."

By Monday, the issue had been neutralized. Schwarzenegger's denials and Shriver's willingness to go to bat for him so aggressively helped convince voters -- many of whom were already predisposed to like the movie star candidate -- that when it came to Arnold's supposed woman problem, there was more smoke than fire. Polls showed him weathering the storm and there wasn't much suspense on Election Night, when Davis was booted from office and Schwarzenegger was chosen as his successor in an 18-point rout over his nearest foe.

The official word is that Shriver knew nothing of the child her husband had fathered when she stood up for him in 2003. Whether this is actually the case will presumably be debated well into the future. Either way, it's fair to wonder: Would there have been a Gov. Schwarzenegger if his wife hadn't been willing to tell voters eight years ago, "Don't worry. It's OK"?