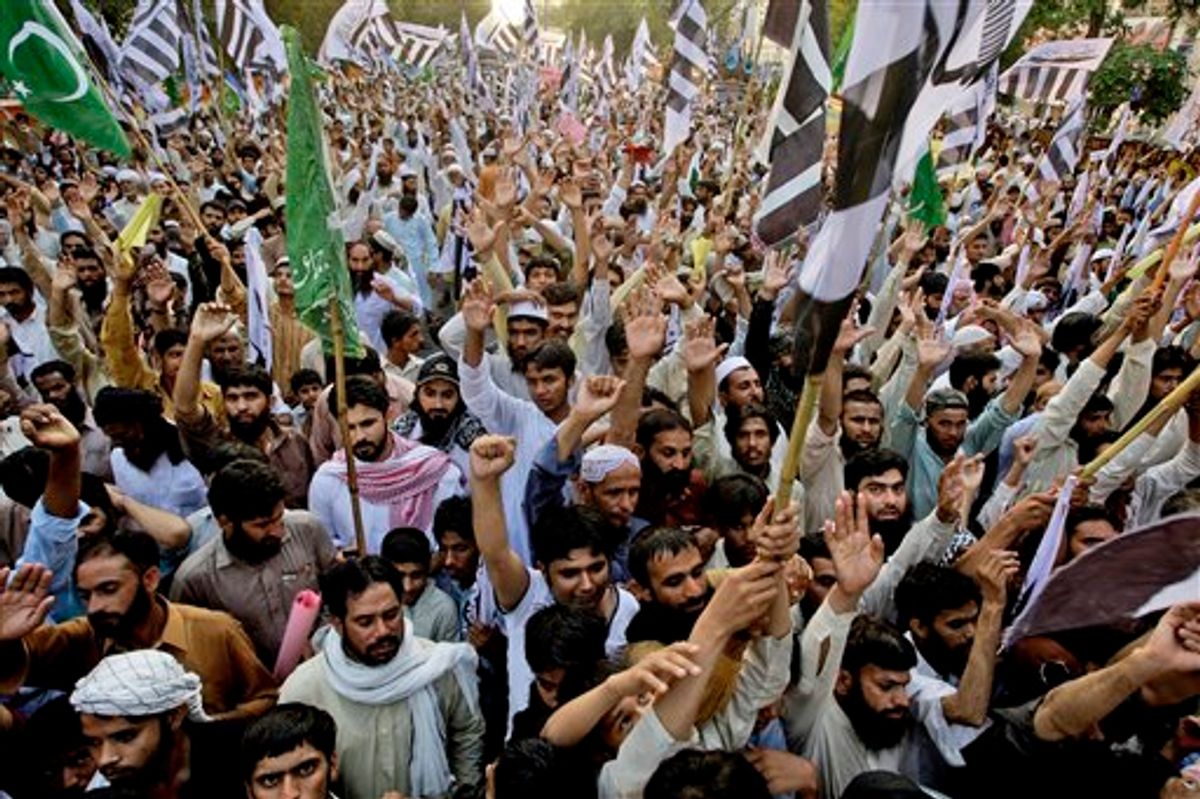 Pakistan's military said Tuesday its ground forces exchanged fire with a NATO helicopter in another possible flashpoint with Washington, but also claimed it arrested a senior al-Qaida operative following U.S. demands for "actions, not words" to restore trust.

The two reports highlight some of the complexities of trying to rebuild ties after the U.S. raid that killed Osama bin Laden earlier this month. Washington needs Pakistan as a crucial partner against al-Qaida, but Pakistani officials remain deeply angered by the secret operation over their borders in the assault on bin Laden.

In a possible sign of stronger controls on the frontier, Pakistani ground forces traded fire with a NATO helicopter on the Afghanistan-Pakistan border, wounding two Pakistani soldiers, officials said. The Pakistani army filed a protest, and a NATO spokesman said an "incident" occurred at the border and that an investigation would be launched.

Pakistan's powerful army and intelligence agencies have faced uncomfortable international scrutiny since bin Laden was killed inside a fortified compound in the army town of Abbottabad.

U.S lawmakers and other critics have said bin Laden's location was the latest -- and strongest -- indication that Pakistan could have been accepting U.S. aid to battle the Islamic militancy, but at the same time possibly protecting terrorists. Pakistan denies that.

The army said it had arrested Yemeni national Muhammad Ali Qasim Yaqub -- also known as Abu Sohaib Al Makki -- who they claim had been working directly under al-Qaida leaders along the border between Pakistan and Afghanistan. It did not say when he was arrested, but noted it was in the southern city of Karachi, where several other top al-Qaida leaders have been detained since 2001.

An American official said the suspect was a mid-level al-Qaida operative and praised the Pakistani military. The official spoke on condition of anonymity to discuss matters of intelligence. There was little if any information about him in the public sphere.

The Pakistani military said Al Makki's detention was a "major development in unraveling the al-Qaida network operating in the region."

On Monday, U.S. Sen. John Kerry met army and civilian leaders in Pakistan during the first visit by an American emissary since bin Laden was killed. With some American lawmakers calling for U.S. aid to Pakistan to be cut, he told them that "action, not words" were needed to tackle militancy.

The United States says it has no evidence that Pakistan's civil or military leadership knew of bin Laden's whereabouts, but it could apply more pressure for operations against Afghan Taliban factions living over the border in northwest Pakistan. Such offensives could make it easier to begin withdrawing American troops from Afghanistan in July as planned.

Islamabad has so far refused to step up missions in the tribal areas, saying its forces are too stretched already.

The NATO firing incident took place in the Datta Khel area of the North Waziristan tribal region, a known sanctuary for Taliban and al-Qaida militants that launch attacks inside Afghanistan as well as Pakistan. It has been targeted repeatedly by U.S. drone strikes.

NATO declined to say which coalition country was involved, but most of the helicopters that fly in that part of Afghanistan are American. The alliance said it was still trying to determine whether the helicopter crossed in to Pakistani airspace.

"We're investigating the incident to determine a flight path by examining GPS waypoints in the helicopter computer, to construct a sequence of events and ultimately determine what led to the exchange of fire," said NATO coalition spokesman Lt. Col. John Dorrian.