Comprehensive immigration reform is dead -- and the left is to blame 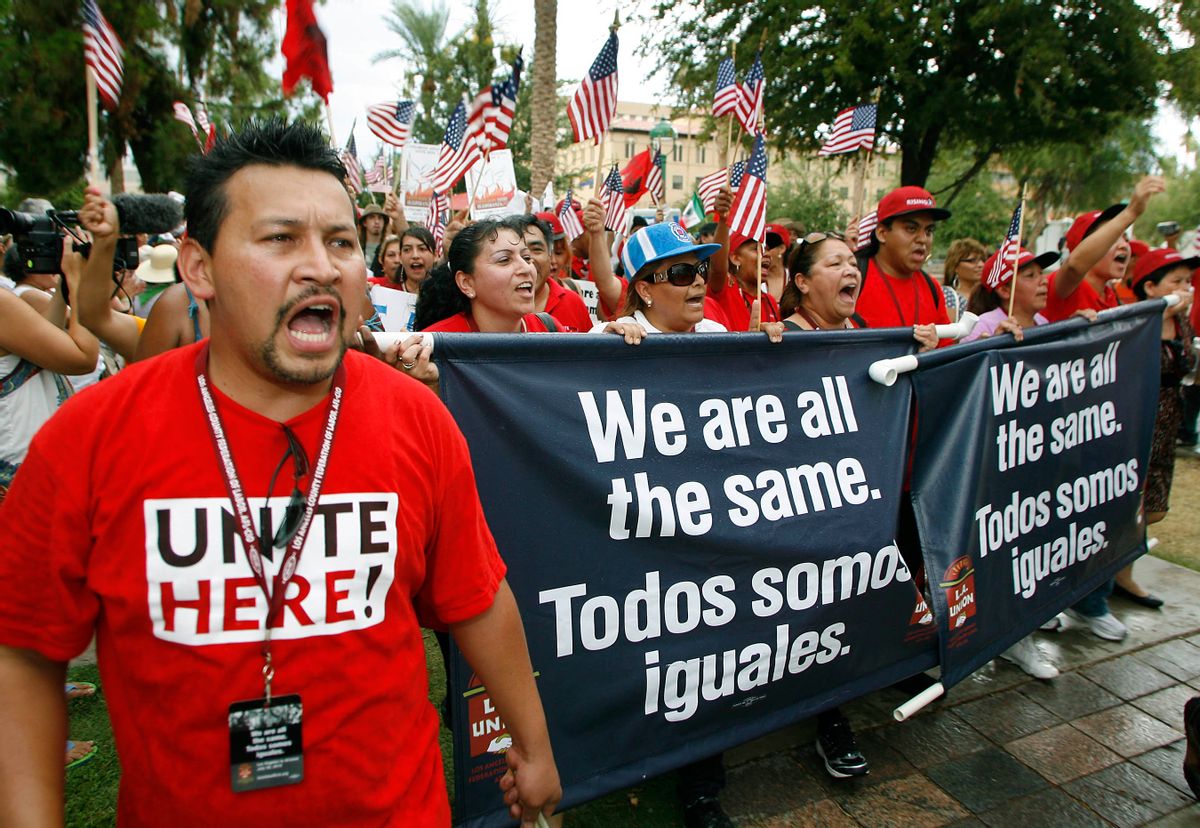 Comprehensive immigration reform is dead. For the foreseeable future, there is no chance that Congress will pass a grand bargain on immigration reform like the one that fell apart in 2007 including a mass amnesty or path to citizenship for most illegal immigrants already in the U.S. Nor is there any chance that the Dream Act, which would provide citizenship for many illegal immigrants as long as they attended college or served in the U.S. military, will be enacted into law. The Democrats could not pass the unpopular Dream Act even when they controlled both houses of Congress last December. Their cynical purpose in reintroducing it now is to play wedge issue politics with Latino voters in the run-up to the 2012 elections.

As in an old Perry Mason TV serial, or an Agatha Christie novel, the victim was murdered by multiple killers. The greatest wound may have been inflicted by the Great Recession. With mass unemployment expected to last for years to come, it is hard to imagine public support for an amnesty for the 12 million or so illegal immigrants in the U.S., particularly if it were not accompanied by adequate enforcement and encouraged a new wave of law-breaking by millions of foreign nationals in anticipation of future amnesties.

But even before the world economy collapsed in 2008, public opinion toward illegal immigration was hardening on both sides of the Atlantic. The backlash against mass immigration, legal and illegal, has contributed to the implosion of center-left social democratic parties in Europe. One unacknowledged goal of the war in Libya is to prevent enormous numbers of North African refugees from seeking asylum in Europe.

In the U.S., America's neoliberal globalist establishment has completely failed in its effort to persuade America's populist, nationalist citizenry that preventing illegal immigration is racist and retrograde in the age of global markets. According to a September 2010 Quinnipiac poll, "stricter enforcement of laws against illegal immigration" beat "integrating illegal immigrants into American society" by 68-24, with 9 percent answering "don't know."

The public opinion polls make it clear that there is no significant public support for what appears to be the consensus position of the American left -- yes to amnesty, no to enforcement.

Any attempt to identify, apprehend or punish foreign nationals or American employers who violate immigration laws is immediately denounced as a racist atrocity by the American left. Progressive opposition to the illiberal Arizona law that permitted police officers to question individuals who might be illegal immigrants was justifiable. That provision of the law (not necessarily others) was an incitement to racial profiling. But many progressives also denounce sensible and necessary laws enabling the police to check the immigration status of people who have already been arrested; the use of E-Verify to make sure that the Social Security documents of workers have not been forged; and workplace raids by ICE on employers suspected of hiring illegal immigrants.

In addition to denouncing efforts by the government to catch foreign nationals and U.S. employers who break the law, the left opposes any penalties for those who are caught. The deportation of illegal immigrants is denounced as an atrocity that tears apart families and communities. In some cases, hardship might justify prosecutorial discretion. But to listen to the loudest voices on the left, you would think that any foreign national who manages to elude the Border Patrol or overstay a visa for a couple of weeks becomes "rooted” in the American community overnight and immune forever to arrest and deportation.

The Great Recession has completely discredited the left’s practical argument against enforcement -- the "supply-side" theory that illegal immigration is an irresistible tsunami that cannot be stopped. Since the recession began in 2008, illegal immigration has dropped dramatically, proving that it ebbs or flows depending on employer demand in the U.S., not on the supply of poor people in other countries. If a recession can reduce illegal immigration by slashing the demand for it, so can demand-side enforcement measures, such as mandatory fines or jail time for scofflaw businesses that employ illegal immigrants.

On the enforcement issue, a widening gap has appeared between the no-enforcement left and liberal politicians who must face the voters, like Barack Obama and Charles Schumer. Democratic officeholders have tried to position themselves in the moderate center between the amnesty-and-no-enforcement left and the enforcement-and-no-amnesty right by declaring that there needs to be a path to citizenship for most illegal immigrants already here, combined with strict enforcement to prevent future waves of illegal immigration, as distinct from tiny trickles.

In order for the enforcement-and-amnesty position to have a chance to succeed, however, Democrats needed to convince the American people that they are sincere about enforcing U.S. immigration laws forever, and not just for a short time, in order to lull the public into supporting a mass amnesty. And Democrats also needed to avoid politicizing the issue, in order to make it possible to win Republican support for a comprehensive immigration reform that would combine a path to citizenship with tougher enforcement that would eliminate the need for future amnesties.

The Democrats have blown it. In his speech last week in El Paso, President Obama mocked those who support stronger enforcement measures, to cheers and laughter from his mostly Latino audience:

In October 2010, the Border Patrol told the Government Accountability Office that it has secured only 44 percent of the southern border.

What about the other 56 percent? Would the president boast about a 44 percent success rate in any other area?

None other than Chris Matthews, as partisan a Democrat as there is, suggested last December that the present-day Democratic Party does not really want immigration laws to be enforced at all:

"The Democrats on the other hand have been pretty much weak in stating exactly how they’re going to stop illegal immigration, I don’t hear them giving me a clarity as to how they are going to prevent the continued flow of illegal people coming into the country, I don’t even think they want to stop it, that’s my belief so far, they like it."

Democrats have also damaged the cause of comprehensive immigration reform by crowing about how they will benefit politically. For more than a decade, Democratic strategists have prophesied that increased Latino immigration, legal and illegal, will create a permanent Democratic majority. Do these Democratic strategists think that their Republican counterparts are not paying attention to boasts that naturalization of illegal immigrants would instantly add 12 million Democrats to the U.S. electorate?

According to the monolithic propaganda of the corporate media and Democratic strategists, Latinos are a) single-issue voters who care chiefly about immigration and b) the new swing vote in American politics. But the polls show that the chief concerns of Latinos are those of other Americans: jobs and the economy.

In any event, the Latino presidential vote is concentrated in big states that are either safely Democratic (California) or safely Republican (Texas). And while Latinos may make up a third of the population in 2050, the Latino vote was only around 9 percent in 2010. In contrast, the white working class continues to account for nearly half of the electorate, according to Democratic analyst Ruy Texeira in 2006:

Progressives' difficulties here are underscored by the large size of this group. According to the 2004 Current Population Survey (CPS) Voter Supplement data, white working-class voters are a larger portion of the electorate than indicated by the exit polls -- 52 percent, rather than 43 percent. Based on educational attainment trends and population trends by race, a reasonable guess is that the size of the white working class in another 10 years, even though it is shrinking, will still be around 46 percent to 47 percent -- a very large group among which to be doing very poorly.

In 2010 Texeira and Alan Abramowitz, who argue that Democrats will benefit in the long run from the growth of the Latino electorate, qualified their optimism:

For the Democrats, the electoral challenge will be to keep their deficit among white working class (non-college-educated) voters as close to single digits as possible. Allowing the GOP to run up super-majorities among these voters will remain a recipe for [Democratic] electoral defeat for many election cycles to come.

One of the wedge issues that Republicans can use to run up super-majorities among white working-class voters for years to come is the claim that Democrats care more about foreign nationals who violate American law than about hardworking American citizens.

All of this is a pity. The best immigration reform would combine a one-time, never-to-be-repeated amnesty with serious, permanent law enforcement effort that would include, at a minimum, the mandatory use of E-Verify, the identification of illegal immigrants by local police, workplace raids, border security including fencing, and, yes, arrests and deportations of illegal immigrants who sneak into the country following the end of the one-time amnesty period. This reasonable combination of enforcement and amnesty would have been difficult to achieve, even without recession-induced mass unemployment and conservative intransigence. But by telegraphing their lack of serious commitment to border and workplace control, the Democrats have contributed their own blow to comprehensive immigration reform.

Instead of a policy of enforcement first, followed by a path to citizenship, the U.S. is likely to end up with enforcement only, and a permanent population of resident illegal immigrants that will stabilize or grow much more slowly as a result of tougher enforcement. That outcome is unfortunate. But the alternative -- unchecked waves of low-wage, gray-market illegal immigration in economic boom times, followed by amnesties every decade or two -- would be worse.