Defection a blow to to the Gadhafi regime 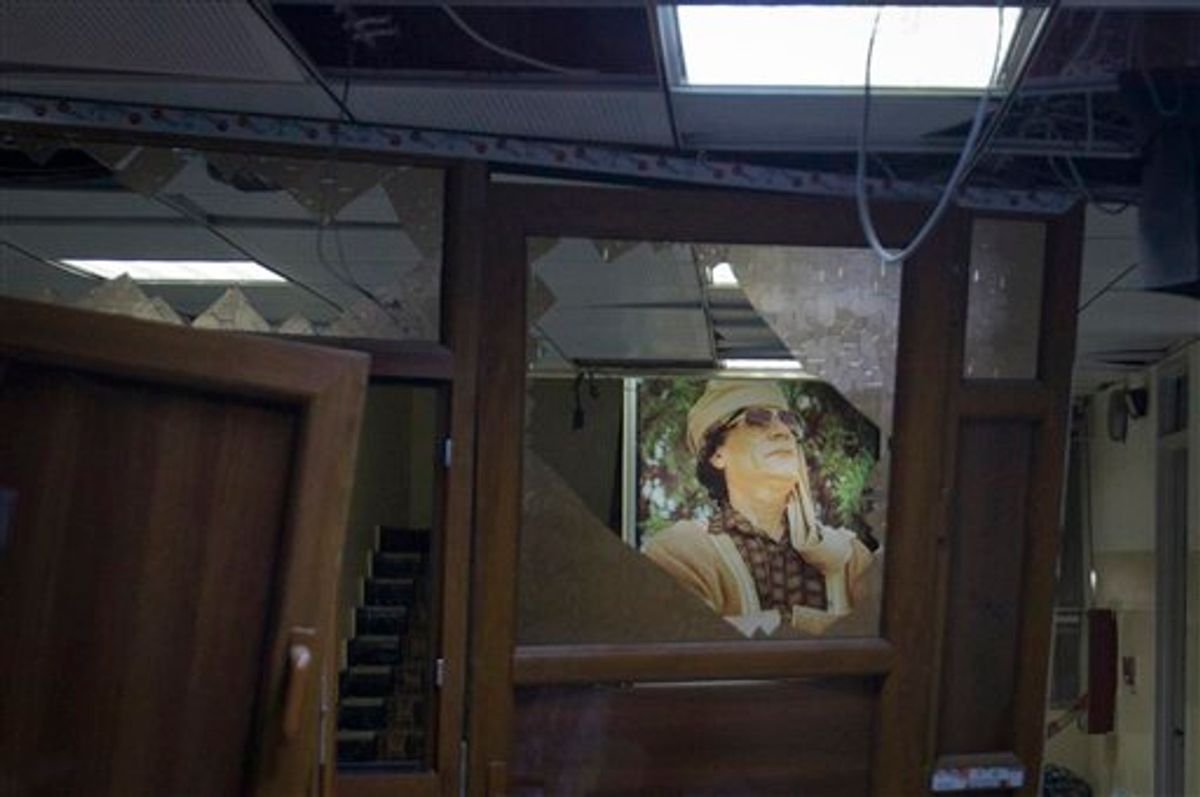 In this photo taken on a government organized tour, a poster of Libyan leader Moammar Gadhafi is seen in a damaged official building following an airstrike in Tripoli, Libya, early Tuesday, May 17, 2011. (AP Photo/Darko Bandic) (AP)
--

Shukri Ghanem, the head of the National Oil Co. and Libya's oil minister, crossed into Tunisia by road on Monday and defected, the Tunisian official said. The official, based in the region around the Ras Jdir border crossing, spoke on condition of anonymity because he was not authorized to speak to the media.

Ghanem is one of the most prominent members of Gadhafi's government to leave amid fighting between the military and rebels seeking to end Gadhafi's more than 40-year rule.

Others who have defected include Foreign Minister Moussa Koussa, one of Gadhafi's earliest supporters; Interior Minister Abdel-Fatah Younes; Justice Minister Mustafa Abdul-Jalil, and Ali Abdessalam Treki, a former U.N. General Assembly president. A number of ambassadors and other diplomats also have resigned their posts.

A NATO-led campaign -- authorized by the United Nations -- is enforcing a no-fly zone over the country and launching airstrikes to try to protect civilians from attacks by Gadhafi's forces.

Early Tuesday, NATO jets pounded two government buildings in the Libyan capital, including the Interior Ministry, setting them on fire. A government spokesman suggested that the ministry was targeted because it contained files on corruption cases against senior members of the Benghazi-based rebel leadership.

In Geneva, meanwhile, the U.N. refugee agency said Tuesday that Libyan authorities appeared to be encouraging African migrants to board unseaworthy boats bound for Europe.

Melissa Fleming, a spokeswoman for the U.N. High Commissioner for Refugees, told reporters that the Libyan conflict has opened up a route for migrants that was closed for two years because of an agreement between Libya and Italy.

Already some 14,000 people -- mostly from sub-Saharan Africa -- have used Libya as a springboard to reach Europe, and thousands more are poised to make the treacherous sea journey in the coming weeks as weather conditions in the Mediterranean improve.

"The authorities (in Libya) are not discouraging, at all, in fact there may be signs that they are encouraging these boat journeys," she said.

Some are migrants fleeing the fighting in Libya, but others appear to be crossing into Libya from elsewhere in Africa because it is easier to get onto smugglers' boats there.

Ghanem, the latest minister to defect, had been at odds with the Gadhafi regime before, basically losing his post for a while in 2009 as two of Gadhafi's sons differed on the direction the country should take in reforming its political and economic systems. His resignation was seen, at least in part, as linked to the creation of a new superstructure governing the nation's oil sector, with the new agency designed to replace one he supported.

Before assuming the oil ministry's portfolio, Ghanem served for around three years as prime minister at a time when Libya was emerging from under the cloud of more than a decade of international sanctions.

Ghanem is among Gadhafi government officials under U.S. sanctions announced by the Treasury Department in early April.

Abdel Moneim al-Houni, a former Libyan Arab League representative who was among the first wave of Libyan diplomats to defect, confirmed that Ghanem had defected but said no official announcement has been made out of concern for the safety of family members who are still in Tripoli. Al-Houni said that he spoke to Ghanem after he crossed the border.

"Most of the officials remaining in Tripoli are forced to stay under intimidation and pressure. They are not happy with what is happening," Al-Houni told the AP.

Guma El-Gamaty, London-based spokesman for the Libyan opposition's Interim National Council, said "all what we know is that Shukri Ghanem is in Tunisia."

NATO has stepped up strikes on the Libyan capital Tripoli, and one of the buildings hit early Tuesday was used by the Interior Ministry, which is responsible for internal security.

Libyan spokesman Moussa Ibrahim suggested the ministry was targeted because it contained files on rebel leaders in Benghazi, the de-facto capital of the eastern half of the country, which is under opposition control.

"If they (NATO) are really interested in protecting civilians ... then we call upon them to stop and start talking to us," Ibrahim said.

Minister Sergey Lavrov says that Gadhafi's representatives reiterated their willingness to consider a peace plan tabled by the African Union that called for an immediate cease-fire and dialogue between the government and the rebels. The rebels have rejected that plan.

The meeting follows a Monday visit to Moscow by the United Nations special envoy for Libya.