Santorum: What does McCain know about torture? 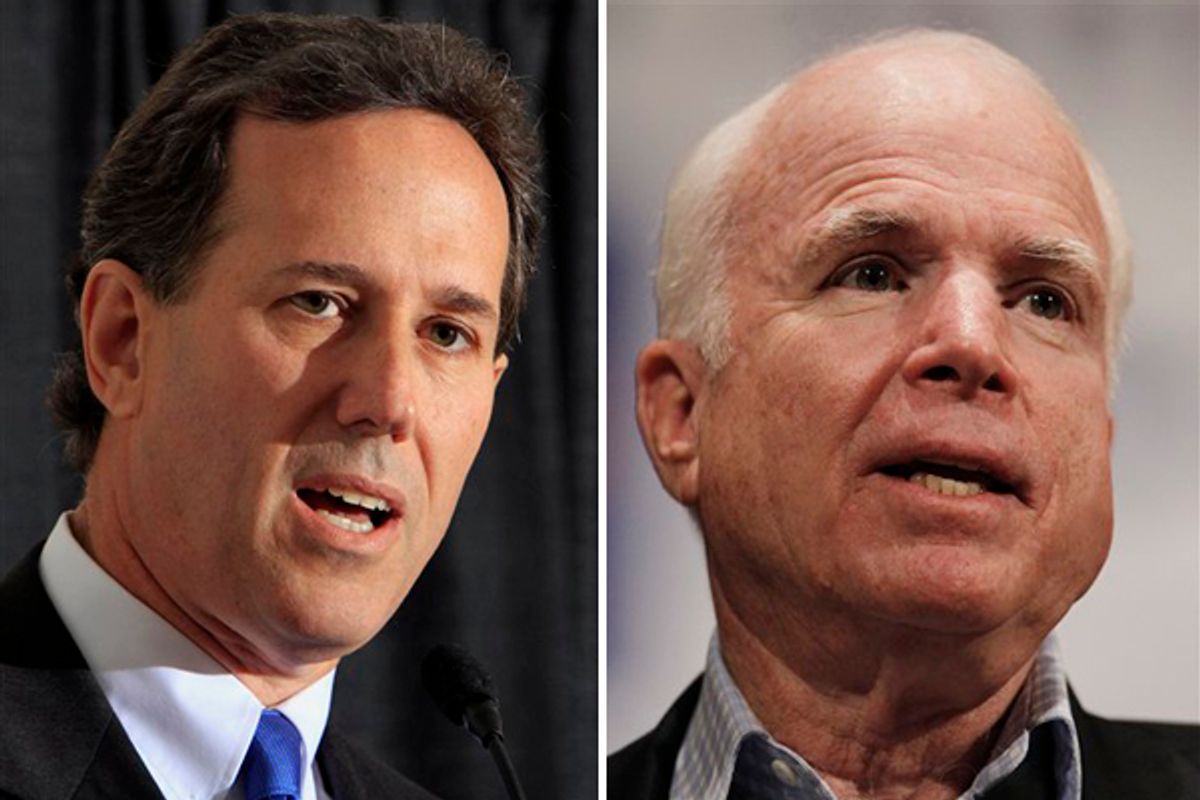 (UPDATED) John McCain has been on something of a crusade this week on the question of how we found Osama bin Laden, giving speeches and writing Op-Eds outlining his position that it was not torture of detainees that led the U.S. to its man.

Now comes presidential candidate and "enhanced interrogation" supporter Rick Santorum arguing on Hugh Hewitt's radio show that McCain simply "doesn’t understand how enhanced interrogation works." Yes, he's talking about the same John McCain who, in his five and a half years as a prisoner of war in North Vietnam, was interrogated during a program of beatings and torture.

HH: Now your former colleague, John McCain, said look, there’s no record, there’s no evidence here that these methods actually led to the capture or the killing of bin Laden. Do you disagree with that? Or do you think he’s got an argument?

RS: I don’t, everything I’ve read shows that we would not have gotten this information as to who this man was if it had not been gotten information from people who were subject to enhanced interrogation. And so this idea that we didn’t ask that question while Khalid Sheikh Mohammed was being waterboarded, he doesn’t understand how enhanced interrogation works. I mean, you break somebody, and after they’re broken, they become cooperative. And that’s when we got this information. And one thing led to another, and led to another, and that’s how we ended up with bin Laden.

Santorum is wrong on the facts about Mohammed (more on this below). But what about his assertion about McCain?

Here's a passage from McCain's memoir in which he describes being subjected to beatings and telling his interrogators false information in response:

Once my condition had stabilized, my interrogators resumed their work. Demands for military information were accompanied by threats to terminate my medical treatment if I did not cooperate. Eventually, I gave them my ship’s name and squadron number, and confirmed that my target had been the power plant. Pressed for more useful information, I gave the names of the Green Bay Packers offensive line, and said they were members of my squadron. When asked to identify future targets, I simply recited the names of a number of North Vietnamese cities that had already been bombed.

I was occasionally beaten when I declined to give any more information. The beatings were of short duration, because I let out a hair-raising scream whenever they occurred.

In one four-day period, McCain says he was beaten "every two to three hours," and his arm was broken and ribs cracked. So if nothing else, this is a man who can be said to know how enhanced interrogation works. (Santorum, as far as I can tell, has never been tortured, nor did he serve in the military.)

Khalid Sheik Mohammed, like McCain, also gave bad information after being tortured -- a point that McCain himself made in a recent Op-Ed:

"In fact, the use of 'enhanced interrogation techniques' on Khalid Sheik Mohammed produced false and misleading information. He specifically told his interrogators that Abu Ahmed had moved to Peshawar, got married and ceased his role as an al-Qaeda facilitator — none of which was true," McCain wrote. "I know from personal experience that the abuse of prisoners sometimes produces good intelligence but often produces bad intelligence because under torture a person will say anything he thinks his captors want to hear — true or false — if he believes it will relieve his suffering."

UPDATE: Greg Sargent asks McCain's spokeswoman for a response to Santorum, and she emails a single word: "Who?"