Says this is a "painful and heartbreaking time" and asks for "compassion, respect and privacy" 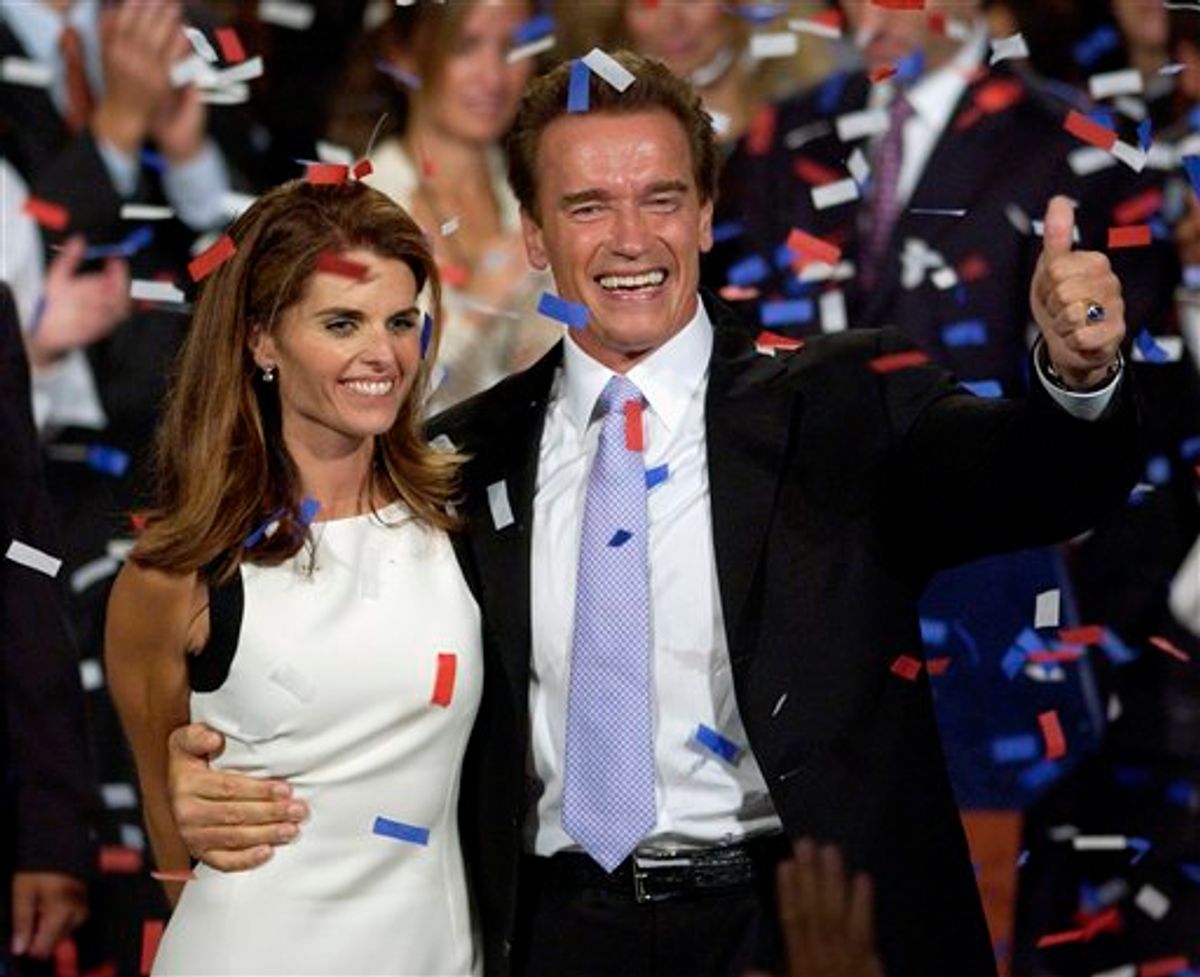 FILE - This file photo taken Oct. 7, 2003, shows Arnold Schwarzenegger and his wife, Maria Shriver ,as they celebrate his victory in the California gubernatorial recall election in Los Angeles. The two announced Monday, May 9, 2011, they were separating. (AP Photo/Mark J. Terrill, File) (AP)
--

Former California Gov. Arnold Schwarzenegger has acknowledged that he fathered a child with a member of his household staff, a revelation that apparently prompted wife Maria Shriver to leave the couple's home before they announced their separation last week.

Shriver separately issued a statement saying it was a "heartbreaking time," and one of their children, Patrick, expressed sadness and a yearning for normalcy in a Twitter message.

Schwarzenegger and Shriver jointly announced May 9 that they were splitting up after 25 years of marriage. Yet, Shriver moved out of the family's Brentwood mansion earlier in the year after Schwarzenegger acknowledged the child is his, the Los Angeles Times reported Tuesday.

"After leaving the governor's office I told my wife about this event, which occurred over a decade ago," Schwarzenegger told the Times on Monday in a statement that was later sent to The Associated Press. "I understand and deserve the feelings of anger and disappointment among my friends and family. There are no excuses and I take full responsibility for the hurt I have caused. I have apologized to Maria, my children and my family. I am truly sorry.

"I ask that the media respect my wife and children through this extremely difficult time," the statement concluded. "While I deserve your attention and criticism, my family does not."

Hours later, Shriver also released a statement: "This is a painful and heartbreaking time. As a mother, my concern is for the children. I ask for compassion, respect and privacy as my children and I try to rebuild our lives and heal. I will have no further comment."

In a Twitter posting Tuesday, Patrick Schwarzenegger, 17, said: "some days you feel like s---, some days you want to quit and just be normal for a bit, yet i love my family till death do us apart." He signed his tweet "Patrick Shriver."

The Times did not publish the former staffer's name or that of her child but said the woman worked for the family for 20 years and retired in January.

Schwarzenegger issued his statement to the Times late Monday, after the newspaper interviewed the former staffer. She had told the Times that another man -- her husband at the time -- was the child's father. When the Times later informed the woman of the governor's statement, she declined to comment further.

Schwarzenegger later released the statement to The Associated Press and other news organizations.

The child was born before Schwarzenegger began his seven-year stint in public office.

Shriver stood by her husband during his 2003 gubernatorial campaign after the Times reported accusations that he had a history of groping women. Schwarzenegger later said he "behaved badly sometimes."

In public comments after the couple announced their breakup, Schwarzenegger said last week that he and Shriver "both love each other very much."

"We are very fortunate that we have four extraordinary children and we're taking one day at a time," he said at a Los Angeles event marking Israeli independence. Their children range in age from 13 to 21.

Since his term as California governor ended in early January, Schwarzenegger, 63, has hopscotched around the world, his wife nowhere in sight. While the "Terminator" star appeared confident about the future since exiting politics, cutting movie deals and fashioning himself as a global spokesman for green energy, Shriver, known for her confidence, seemed unsettled.

Shriver, 55, maintained her own identity when her husband entered politics, though she gave up her job at NBC. Their union was often tested in Sacramento, where the former action star contended with a rough seven years of legislative gridlock, a budget crisis and lingering questions about his fidelity.

The estranged couple's initial separation statement referred to "a time of great personal and professional transition for each of us" but gave no hint of what caused the split.

Shriver had also mentioned "transitions" in a Facebook posting earlier this year but gave no details. At the time it seemed most likely to be a reference to the end of her role as California's first lady. Schwarzenegger had left office in January after seven years as California's governor. Shriver never moved to Sacramento during that time, but she used her position to run a popular yearly women's conference that drew high-profile attendees.

They married on April 26, 1986, in a white clapboard church in Hyannis, Mass., with many members of the Kennedy clan and celebrities present and a crowd of fans cheering outside. At the time she was an anchor on the "CBS Morning News" and he was filming a movie.

In addition to Patrick, they have three other children, Katherine, 21, Christina, 19, and Christopher, 13.