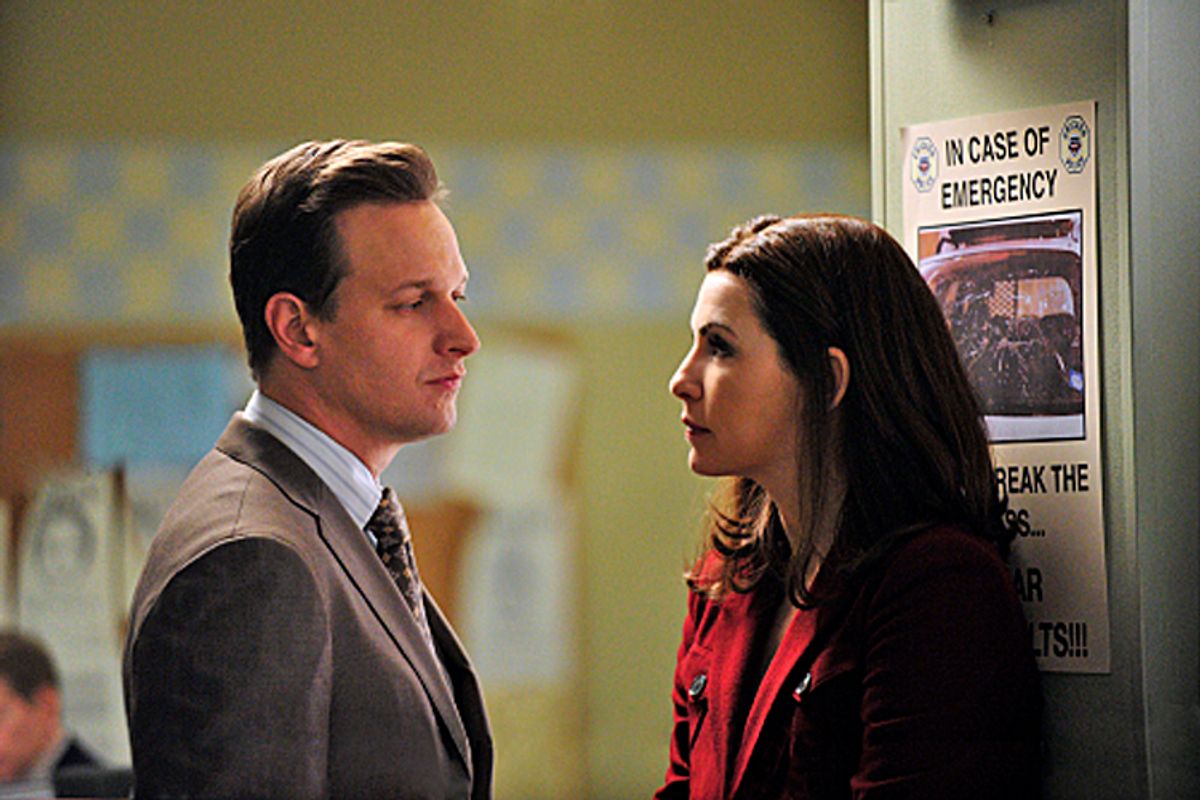 "Breaking Up"--Alicia (Julianna Margulies) and Will (Josh Charles) face a moral dilemma when they must try to turn a clientâs son against his girlfriend, who are both accused of murder on THE GOOD WIFE, Tuesday, Jan. 11 (10:00-11:00 PM, ET/PT) on the CBS Television Network. Photo: John Paul Filo/CBS Â©2010 CBS Broadcasting Inc. All Rights Reserved. (John Paul Filo)
--

There are plenty of reasons to watch CBS' "The Good Wife" -- sharp writing; unfussy acting; a savvy sense of what it's like to be a jaded political animal in Chicago -- but for me, it's mainly about the filmmaking. Last night's season finale "Closing Arguments" (spoiler alert for anyone who hasn't watched yet!) reminded me of why I fell in love with this show in the first place, and why I continue to watch it even when its ripped-from-the-headlines plots feel labored and its workplace soap opera tangents become too, well, soapy. Like the series as a whole, this episode -- directed by series co-creator Robert King, and co-written with his wife and collaborator Michelle King -- is old fashioned in the best sense. Every scene is written, acted and directed with maximum intelligence and minimum fuss.

Just look at the final act -- the sequence in which the show's heroine, the lawyer and scandalized political wife Alicia Florrick (Julianna Margulies) and her co-worker and former law school classmate Will Gardner (Josh Charles) celebrate the successful conclusion of a high-profile murder case by getting a room and consummating two seasons' worth of sexual tension. The "Will they or won't they?" thing is an innately predictable and tedious TV gimmick (though damn near foolproof if you like the actors). But the episode knocks the dust off the moment by staging the run-up to the tryst with world-weary reticence and visual flair.

The sequence takes a banal part of the modern landscape -- sliding elevator doors -- and makes them expressive.  I love how the scene is shot with a long lens so that the doors are abstracted; they whoosh across the screen, creating an effect similar to an old-fashioned horizontal wipe in a silent film. The movement of the doors  also fragments what was obviously a long, awkward trip  to the presidential suite ($7,800 a night? These people have too much money), an interlude that gave Alicia and Will time to second-guess their decision to sleep together; there's no actual conversation, just stray words here and there. The blurred, close-up motion of the doors also reminded me of a still camera's iris opening and closing -- a visual effect that's often added to scenes in thrillers where a private investigator does surveillance on an unsuspecting couple. That climactic exchange of close-ups -- Alicia taking the door key away from the flustered Will and using it correctly -- was perfectly played by Margulies and Charles; it's spot-on for "The Good Wife," a show populated by emotionally constipated, upper-middle-class people who live in the public eye, and are forever on guard against having their private lives turned into public entertainment. And that last shot of the entire sequence was perfection: they go in the room and shut the door, and the camera glides back and swings left, bringing the long, empty hall into view.

If this show were a 1950s movie, it wouldn't have played any moment of this sequence any differently. Its relaxed, slightly analytical style illustrates why "The Good Wife" is a hit that crosses generational lines. The sequence is sexy not because it shows sex, but because the whole, complex exchange is shot and acted with delicacy and imagination. It's a little touch of Wong-Kar Wai on a CBS drama about uptight lawyers and politicians.

The rest of the episode was strong, too. I liked the race-against-the-clock plotline, with Will stalling the judge in hopes that his team could deliver DNA tests on a previously missing, bloody glove and exonerate his client in a murder trial. And there were seven, maybe eight scenes so exquisitely performed that you could show them in an acting seminar titled, "This is how you do it." I was especially fond of the scene between Will and Alicia's ruthless husband Peter (the terrific Chris Noth, who has yet to sentimentalize this controlling, deeply selfish man), and that marvelous bit where political operator Eli Gold (Alan Cumming) tells Diane Lockhart (Christine Baranski) that he's looking to set up his consulting business in-house, and is offering the firm the chance to "vie" for his services. (If there were a special Emmy for outstanding use of the pregnant pause, Baranski's delivery of the line, "And why do we warrant this ... largess?" would win it.)

And from week to week, the show is uncannily centered, rarely playing even outlandish moments in an off-key way. Even bad stuff is often rescued, or at least made tolerable, by smart acting and filmmaking. (I was skeptical of the revelation that Archie Panjabi's ace investigator Kalinda slept with Peter until Kalinda confirmed it, in that icewater-veined way of hers: "I slept with him once. That's what I do.") I can't agree with the Onion A/V Club writer Todd VanDerWerff's assertion that "The Good Wife" is a worthy successor to "The Wire." (That would be "Treme," if anything -- and besides, "The Good Wife" sticks mainly to white folks with money, where David Simon's HBO shows are demographic layer cakes.) Still, the show should not be underestimated. It's a series by and about grown-ups, interspersing big moments with small, good things.