New trade pacts will kill jobs, and Obama knows it

The White House contradicts itself as it tries to sell the public on deals with Panama, South Korea and Colombia 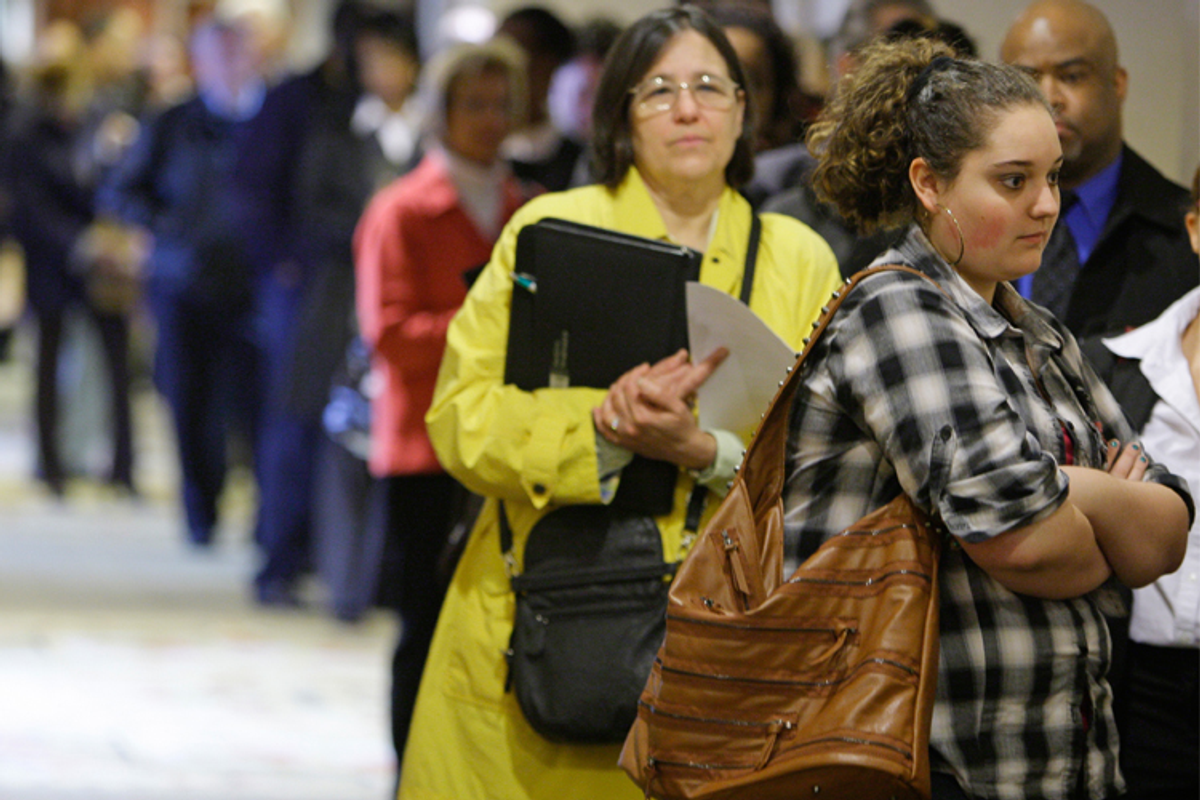 Job seekers wait in line for a job fair to open in Independence, Ohio, on May 3.
--

For months, the White House has been selling an understandably skeptical public on the idea that new trade pacts with South Korea, Panama and Colombia will create "more American jobs." The rhetoric asks America to forget not only its painful experience with the North American Free Trade Agreement, but candidate Obama's promise to fundamentally reform the structure of such agreements to make them more worker friendly. It's as if the president has now fired up the flux capacitor and steered us back to the politics of the early 1990s -- a politics that presented corporate-written trade pacts as progressive, newfangled Works Progress Administrations that would put millions of Americans back to work.

But in their effort to make such a case, the White House and its Democratic loyalists in Congress have now inadvertently undermined their own job-centric argument for more NAFTA-style trade deals. As the New York Times reported Monday:

The Obama administration said on Monday that it would not seek Congressional approval of free trade agreements with Colombia, Panama and South Korea until Republicans agree to expand assistance for American workers who might lose jobs as a result... The announcement puts the White House in line with Congressional Democrats who have made expanded benefits a condition of their support for the trade deals.

Though not explicitly referenced by the Times, the contradiction here is blindingly obvious. The administration is simultaneously selling the trade deals as engines of job growth while admitting that the deals will likely kill so many American jobs that Congress must preemptively cough up money to clean up the corresponding economic wreckage.

Of course, whether or not the administration's new trade deals are inked, Trade Adjustment Assistance (TAA) is an absolutely critical program that needs to be expanded. In the epoch of outsourcing, workers are being continuously displaced by foreign competitors -- competitors who are allowed to sell into our market even though our government doesn't ask them to follow our domestic wage, labor and environmental laws. TAA is one of the few federal programs that still exists to try to minimally mitigate the pulverizing hardships this dynamic creates for so many American families.

But this isn't about the value of TAA unto itself -- it is specifically about the move to rhetorically tie a proposed TAA expansion to a package of new trade pacts. Doing that acknowledges far more than just the inherent problems of the globalized economy and/or the current recession. It implicitly admits that despite optimistic claims to the contrary, those pushing the trade pacts know the deals will almost surely result in further job loss. Because if it was the other way around -- if the proponents of these trade deals genuinely believed the pacts would create jobs -- then those proponents (many of them self-described deficit hawks) would almost surely argue that the deals were a cause for reducing TAA. They would, indeed, insist the need for such assistance would sharply diminish in the face of all the new jobs the trade pacts are going to create.

That they are doing exactly the opposite tells you what Obama administration officials really know and believe about the job effects of these trade deals. These officials, after all, aren't stupid -- they see the job-loss data from NAFTA and China PNTR and know that continuing that trade model via new pacts with South Korea, Panama and Colombia will likely elicit the same result. However, they also know that A) the president needs to raise a lot of corporate money to run for reelection B) a lot of corporate money (read: campaign contributions) is behind these trade pacts but that C) American voters have caught on to the deleterious effects of such trade policies.

So they've come up with a political message that is a naked contradiction -- an argument that says we must pass these trade deals to create jobs, but we can't pass these trade deals unless we have more money for the job losses the deals will inevitably create. Undoubtedly, the White House is betting that nobody picks up on the clumsy oxymoron -- and unfortunately, if past reporting on trade is any indication, it's not a bad bet.