GOP candidates all terribly flawed, so why not pretend Rick Perry is running? 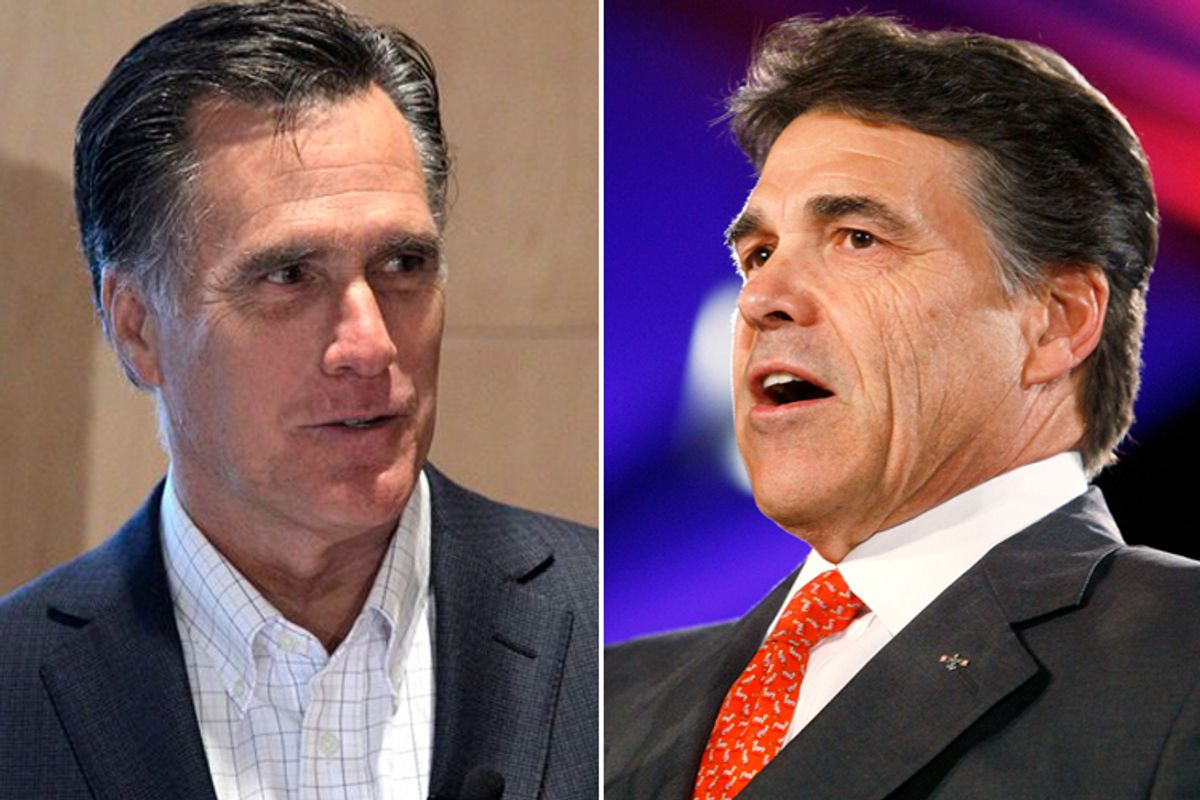 The Republican elites hate Mitt Romney and fear Michele Bachmann and no one is remotely interested in Tim Pawlenty. The Republican base loves Bachmann (and is learning to love Herman Cain, our next president), because she sounds like their talk radio shouters and reads and believes the same awful websites that they do. Mike Allen says the elites are begging for someone who is serious but not Romney to enter the race and magically win it. The top fantasy pick is Mitch Daniels, because Jeb Bush is not running. There is also a lot of talk of Chris Christie, who, as Jon Chait points out, is not actually very popular, despite the fact that he is a viral video celebrity. But Mitch Daniels and Chris Christie won't commit. All of this has led to the inevitable "Rick Perry is gearing up to run" story.

Perry is the governor of Texas, a job that primarily entails saying how awesome Texas is and how much the rest of the country sucks compares to Texas. (The other part of the job is executing as many prisoners as possible, even when there is evidence of their innocence.) Real Clear Politics has the story on the supposed "Rick Perry presidential push."

The push seems to not really involve the governor himself, who tends to tell people he's not running. Instead, various unnamed "confidantes" and "associates" are "quietly making inquiries" in Iowa. They are making these inquiries so quietly that the vast majority of people actually involved in the 2012 race have not heard anything about it:

The Perry chatter has been so discreet that nearly a dozen early-state GOP operatives and consultants contacted by RCP hadn't heard a word about it. But they are unfazed that the buzz exists.

I can't believe people were unfazed by these shocking rumors. "What's that? You're calling to say that people who work for or merely are acquainted with a reasonably popular Republican governor think he should run for president? This changes everything!"

Maybe Rick Perry will run for president -- he certainly is better "on paper" than most of the other candidates -- but at the moment this is pure fantasy fueled by the GOP rank-and-file's dissatisfaction with their current choices and the big talk of the ambitious aides and operatives that every major politician is surrounded by. If those operatives aren't goading political reporters into writing speculative stories about their bosses' presidential ambitions, they're not doing their jobs.