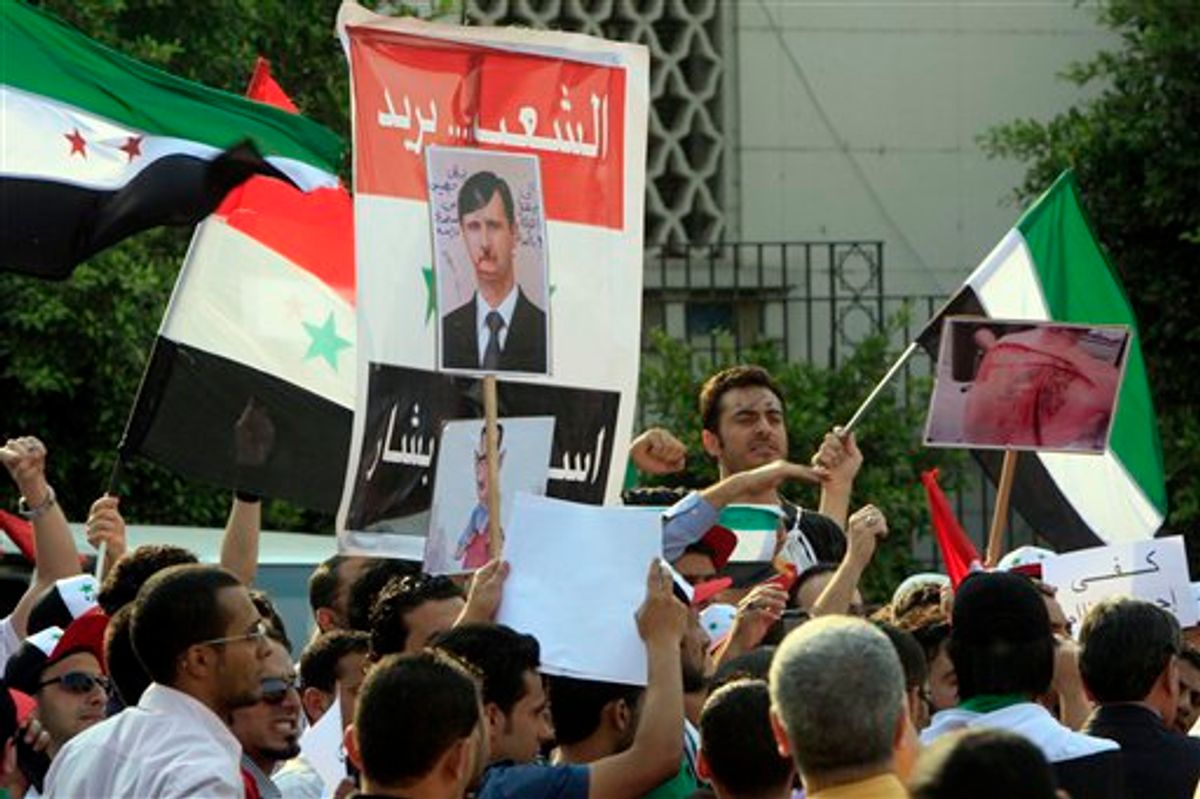 Syrian protesters chant slogans and hold anti-Syrian President posters during a demonstration demanding that Syria's President Bashar Assad step down, in front of the Arab League headquarters building in Cairo, Egypt, Sunday, May 15, 2011. Hundreds of Syrians fled to neighboring Lebanon to escape a violent crackdown against an anti-government uprising that has claimed the lives of more than 800 civilians, Lebanese security officials and a leading human rights group said. Arabic read " people want Assad step down". (AP Photo/Amr Nabil) (AP)
--

The United States slapped sanctions on Syrian President Bashar Assad and six senior Syrian officials for human rights abuses over their brutal crackdown on anti-government protests, for the first time personally penalizing the Syrian leader for actions of his security forces.

The White House announced the sanctions Wednesday, a day before President Barack Obama delivers a major speech on the uprisings throughout the Arab world with prominent mentions of Syria.

The Obama administration had pinned hopes on Assad, seen until recent months as a pragmatist and potential reformer who could buck Iranian influence and help broker an eventual Arab peace deal with Israel.

Assad's increasingly brutal crackdown left U.S. officials little choice but to abandon the effort to woo Assad, and to stop exempting him from the same sort of sanctions already applied to Libya's Moammar Gadhafi.

The sanctions will freeze any assets Assad and others have in U.S. jurisdiction and make it illegal for Americans to do business with them. The U.S. had imposed similar sanctions on two of Assad's relatives and another top Syrian official last month but had thus far refrained from going after Assad himself.

The move comes as Assad said earlier Wednesday that his security forces had made mistakes during the two-month uprising and blamed poorly trained police at least in part for the crackdown that has killed more than 850 people.

On Tuesday, Secretary of State Hillary Rodham Clinton said she was increasingly alarmed by developments in Syria and called out Assad and his allies for failing to follow through on earlier pledges of reform.

"They have embraced the worst tactics of their Iranian ally, and they have refused to honor the legitimate aspirations of their own people in Syria," Clinton told reporters. "President Assad talks about reform, but his heavy-handed, brutal crackdown shows his true intentions."

Clinton's pointed accusation about Assad bearing personal responsibility for the repression came as the White House ramped up its criticism of his rule.

"The recent events in Syria we believe prove that the country cannot go back to the status quo ante," he said. "Syria's future will only be secured by a government that reflects the popular will of its people."