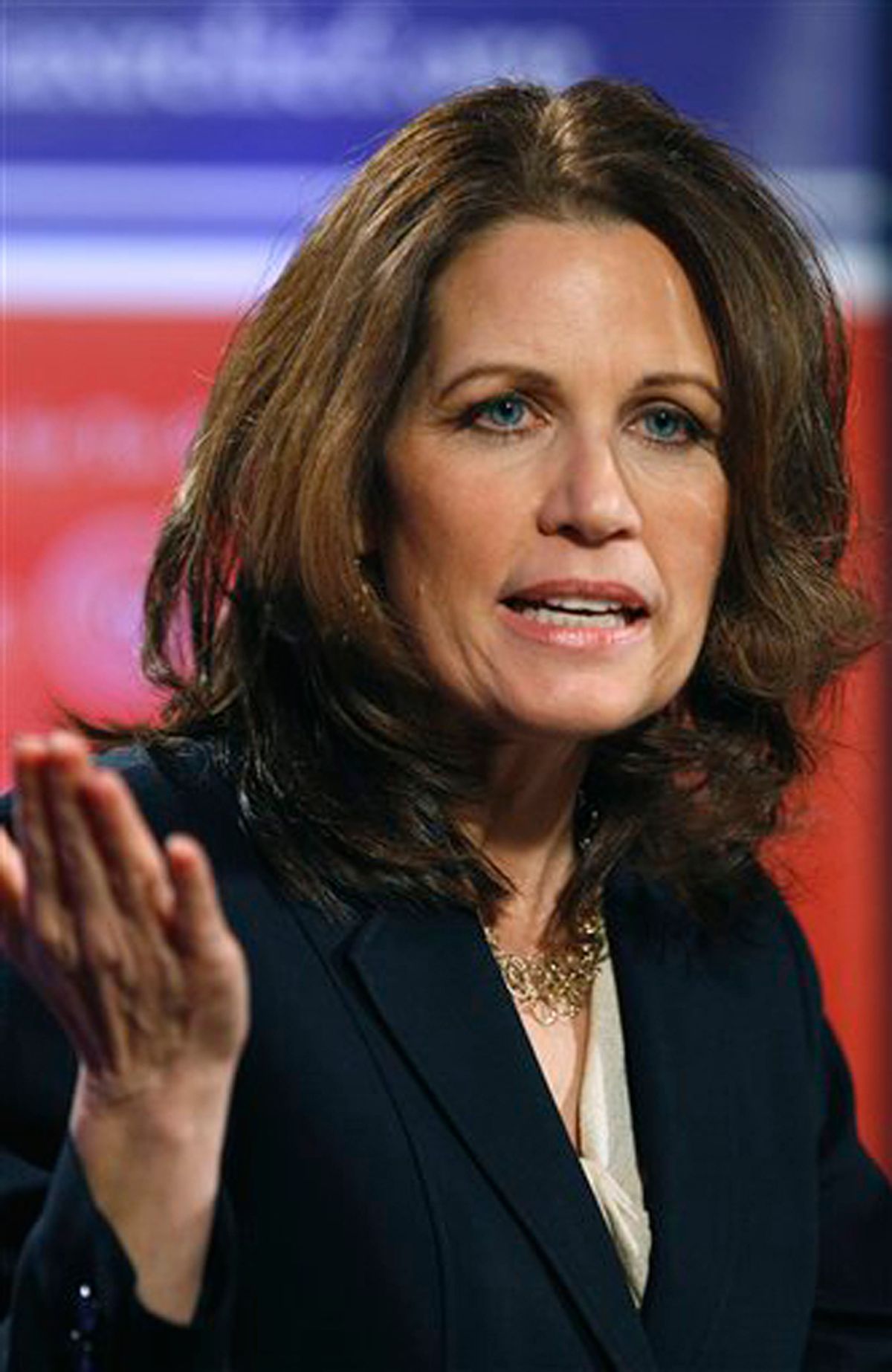 FILE - In this Jan. 21, 2011 file photo, Rep. Michele Bachmann, R-Minn. speaks in Des Moines, Iowa. Now this is a fundraising frenzy. Former Massachusetts Gov. Mitt RomneyÃ­s presidential exploratory campaign is organizing a big phone bank fundraiser in Las Vegas next month. Former Minnesota Gov. Tim Pawlenty has been holding Ã¬friendraisingÃ® meetings in places like Florida, Puerto Rico, Nevada and California. And Mississippi Gov. Haley Barbour has been meeting finance and political operatives in California, Florida and New York while also making more traditional campaign stops in early voting states. GOP presidential hopefuls are scurrying behind the scenes in a cut-throat dash to raise cash and assemble influential backers during the key April-June fundraising period. With the 2012 primary campaign off to a relatively late start, the candidates are under intense pressure to demonstrate their credibility this quarter before a slower summer fundraising season kicks in. (AP Photo/Charlie Neibergall, File) (Charlie Neibergall)
--

WASHINGTON -- As she mulls over a run for the White House, Rep. Michele Bachmann says she is spending time reading books about presidential campaigns -- particularly ones that explore the darker side of campaigns.

Bachmann is expected to announce sometime in the next month that she’ll form an exploratory committee for president — senior aides say she’s "very likely to run" -- and the congresswoman told MinnPost that if she does indeed run, she will retain her House seat throughout at least the primary campaign.

In interviews with MinnPost, Bachmann said that as she prepares to make her decision, she’s gone cover-to-cover on "The Politician," a book written by a former John Edwards staffer that details the lengths Edwards went to in order to cover up an affair even as his wife was fighting a recurrence of cancer.

She also read "Game Change," an in-depth account by a pair of veteran political reporters of the 2008 election that allegedly convinced South Dakota Sen. John Thune’s wife that she wanted no part of a presidential bid.

Still, according to core members of Team Bachmann, rather than considering "if" she should run, running has for months now been the default decision, while the prospective candidate and her family sought validation that it was the right move.

Bachmann staffers wouldn’t say exactly where or when she might make that announcement, and in an interview with MinnPost earlier this month, Bachmann wasn’t saying.

"You’re going to find out," she said, when I asked about the announcement on her presidential decision. "It’ll be done in a way that, I think, you’ll really enjoy."

How are you going to do it?

Bachmann has trips to Iowa and New Hampshire scheduled later this month.

Bachmann has long said that any campaign announcement would be early enough to give her a shot at really competing in the Iowa Straw Poll, this August in Ames. It’s a test of campaigns’ organizational skills and an early indicator of whether they can get activists to not just say they’re supportive, but actually take a weekend and drive to the middle of the state to stand and be counted.

She has taken some of the traditional steps -- she was in New York City this week shopping a book deal with a targeted publication date of September.

And her camp expects her to be able to compete with the best of the other campaigns in the money race.

She took in more than $13 million for her House race in 2009-10, most in the country for a House race, and much of that came from small donors outside of Minnesota. In the first quarter of 2011, her $2.2 million between her PAC and congressional campaign was actually more than Mitt Romney pulled in.

Earlier this week, Romney raised $10.25 million in a single day. Tim Pawlenty last night hosted hundreds at an up-to-a-$2,000-a-plate fundraiser in Minneapolis. Both campaigns have highlighted articles describing the big-money names endorsing them.

Bachmann, in contrast, is a fundraiser who specializes in small donations. Sometimes that works, and President Obama is a testament to that. Most often, however, support a candidate thinks they can count on fails to materialize and the campaign flames out.

With that in mind, Bachmann’s camp has been circulating fundraising appeals designed to raise money off her indecision. "If you want me to continue fighting the big-government Obama agenda in the U.S. House of Representatives, please make a generous donation of $25," Bachmann wrote in a recent appeal to supporters. "If you want me to seek the Presidency, please make a donation of $50 or even $100 to let me know I can count on you."

If she decides to run, Bachmann will start off with a campaign apparatus that looks nothing like that of the front-running Romney or Pawlenty, both of whom have dozens of staffers already on the payroll.

For Bachmann, the only state where she currently has a publicly-identifiable "organization," as such, is Iowa. The first in the nation caucus state also happens to be where Bachmann was born -- she tells crowds there that it’s good to be back "home" -- and it’s where much of her focus after an announcement would go.

Bachmann’s campaign in the Hawkeye State is led by Kent Sorenson, a state senator heavily enmeshed with the Tea Party. Wes Enos, political director for Mike Huckabee’s successful 2008 Iowa Caucus campaign, is on board as well.

Bachmann’s closest ally in the House is Iowa Rep. Steve King, and while he’s still officially neutral in the 2012 race, he said he’d endorse a candidate after the Iowa Straw Poll. If Bachmann gets that endorsement, she’d have access to a massive organization under King, the loudest voice in that state among movement conservatives like herself.

Elsewhere, the campaign structure is far more nebulous. In New Hampshire, the only person I’ve seen who has been publicly identified with some sort of Bachmann title is Jeff Chidester, a talk radio host there who is acting as her spokesman.

Bachmann, however, says she is building an organization in each of the first three states — Iowa, New Hampshire and South Carolina — and that they’ll be ready to go if and when she enters the race.

The downsides of added scrutiny

As evidenced by the political books Bachmann says she’s been reading, a run for president invites tons more scrutiny from the national press, and Bachmann is already seeing the beginnings of that.

Earlier this week, the right-leaning Daily Caller took fresh aim at parts of her record that have been known about in Minnesota for some time. Among the items the Daily Caller singled out as problematic:

It’s not like any of that is hard to find either. All of it meticulously catalogued at the Dump Bachmann blog, a treasure trove of ready-made opposition research and aggregation that’s currently fourth on the results page when you search Google for "Michele Bachmann."

No doubt other campaigns already have that page bookmarked.

If elected, Bachmann would become the first female president in U.S. history, of course, and her husband Marcus would be the first-ever "First Gentleman." He’s a constant presence at her side as she travels the early states and takes a very active role as a political adviser.

And in this context, Marcus Bachmann has been one of the biggest supporters of Michele Bachmann running for president.

"Marcus is very positive,” she said. "He was far more positive, I think, about it than I was, but we’ve tracked each other fairly closely on this."

"But I think because this is such a momentous decision, we’ve really given ourselves the necessity of taking the time that it requires to think through a decision like this, so we’ve been very deliberate."

Certainly the field that is developing has created an ideological opening for Bachmann. Nate Silver, the political data and polling expert at The New York Times, charted out each of the candidates on the ideological spectrum using bubbles the size of their respective influence.

Bachmann was listed as a "conservative outsider," along with Sarah Palin, Mike Huckabee, Jim DeMint and Herman Cain. Well, DeMint isn’t running. Neither is Huckabee, who would have been a formidable opponent having won the 2008 Iowa caucuses.

Not surprisingly, once Huckabee bowed out, Silver rated Bachmann among those most likely to gain. If Palin stays out, logically, she benefits even more.

Once Huckabee bowed out, Chief of Staff Andy Parrish said the phone lines of her congressional office practically “melted down” with conservative activists telling her to run.

Though I can’t independently validate the nature of those inquiries, on a recent unannounced visit to her D.C. office I found three people manning the lines (most offices have just one), struggling to handle the sheer volume of incoming calls.

Staying in her seat

If (or, now more likely, when) she does decide to get in, it won’t be at the expense of her House seat. Bachmann said she has firmly decided to keep hold of the seat through at least the nomination process and would like to run again for the House should her presidential aspirations go unfulfilled.

"That’s something that we have talked about and we have considered," Bachmann said. "Whenever I do anything I run to win that office, and if I make the decision to run for president I would be running to win that office -- not just the primary, but also the general.

"I also recognize that it is very high stakes, and there are a lot of people in, and so that’s something that we’ve considered is that I could always run for the House."

Maintaining her position in the House comes with a certain number of advantages and disadvantages. On the plus side, she would keep her title, paycheck and easy access to the Washington press corps. All she has to do in D.C. to command a gaggle of reporters is stroll off the House floor and boom, instantly she’s surrounded by press.

On the down side, she’ll have to physically be in Washington for votes while her opponents are out canvassing the early primary states. While the Mitt Romneys and Tim Pawlentys of the world can be in Iowa and New Hampshire seven days a week if they want, Bachmann would be limited to weekends and days when the House is on recess.

Instead, her target for deciding whether or not to run for a fourth term in the House is around May 22 of next year, when candidates can begin filing for the fall election with the Minnesota Secretary of State’s office.

"But at the same time, if this is something that wouldn’t come to fruition, I would like to continue serving in Congress."

Derek Wallbank is MinnPost's Washington, D.C., correspondent, covering Minnesota's congressional delegation and reporting on developments out of Washington that are important to Minnesota readers.