One big bust of a speech 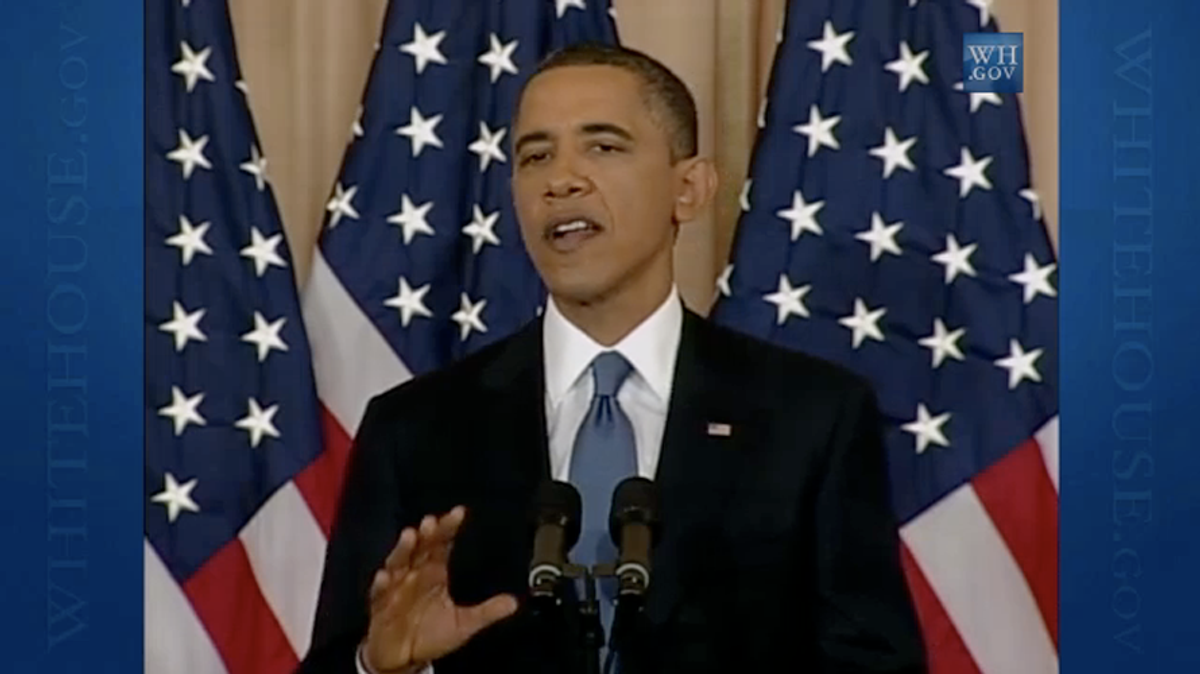 President Obama just finished what was sold as a major speech on the Middle East and the "Arab spring," and here's the takeaway: The president managed to use 5,400 words and spend a solid hour speaking without announcing any significant new policy initiatives.

This is the sort of soaring rhetoric that characterized the entire speech, which was being edited right up until he delivered it (starting a half hour late):

In terms of policy, here's the bottom line from the speech: The Obama administration will continue to get tougher on the Assad regime in Syria, while not doing much (if anything) in response to Bahrain's violent crackdown on protesters. It wants to see an Israel-Palestine settlement, but U.S. policy remains the same as ever, and there will be no new push for negotiations. The administration supports a set of universal values. But U.S. ally Saudi Arabia, one of the most persistent human rights violators in the region, was not mentioned in a single time in those 5,400 words.

In short, Obama felt he needed to play the role of world leader by delivering a big response to the popular Arab protests, but he doesn't want to actually do much.

In one section early in the speech, Obama waxed poetic about those crying for freedom in the region:

A new generation has emerged. And their voices tell us that change cannot be denied.

In Cairo, we heard the voice of the young mother who said, “It’s like I can finally breathe fresh air for the first time.”

In Sanaa, we heard the students who chanted, “The night must come to an end.”

In Benghazi, we heard the engineer who said, “Our words are free now. It’s a feeling you can’t explain.”

In Damascus, we heard the young man who said, “After the first yelling, the first shout, you feel dignity.”

What's conspicuously missing from that list? Yup, Bahrain. The pass given on Bahrain's continuing crackdown on protesters (the latest from the Gulf kingdom is the prosecution of newspaper editors) has been a consistent policy.

But later in the speech, Obama did swing back to Bahrain and address the situation head on:

Bahrain is a long-standing partner, and we are committed to its security. We recognize that Iran has tried to take advantage of the turmoil there, and that the Bahraini government has a legitimate interest in the rule of law. Nevertheless, we have insisted publically and privately that mass arrests and brute force are at odds with the universal rights of Bahrain’s citizens, and will not make legitimate calls for reform go away. The only way forward is for the government and opposition to engage in a dialogue, and you can’t have a real dialogue when parts of the peaceful opposition are in jail. The government must create the conditions for dialogue, and the opposition must participate to forge a just future for all Bahrainis.

What about on Israel-Palestine, what Obama referred to as "another cornerstone of our approach to the region." Here's the key statement of policy:

So while the core issues of the conflict must be negotiated, the basis of those negotiations is clear: a viable Palestine, and a secure Israel. The United States believes that negotiations should result in two states, with permanent Palestinian borders with Israel, Jordan, and Egypt, and permanent Israeli borders with Palestine. The borders of Israel and Palestine should be based on the 1967 lines with mutually agreed swaps, so that secure and recognized borders are established for both states. The Palestinian people must have the right to govern themselves, and reach their potential, in a sovereign and contiguous state.

The bolded line has been getting some attention, but it sounds a lot like the formulation President Bush used in 2005.

Meanwhile, Prime Minister Netanyahu is approving more Jewish settlements beyond the Green Line, and Jewish donors are reportedly pressuring Obama not to demand too much from Israel.

And it will certainly be interesting to compare Obama's rhetoric today to his remarks before the American Israel Public Affairs Committee (AIPAC) on Sunday.