The Senate's "Dr. No" rides again

Tom Coburn bails on budget talks while complaining that Congress can't get anything done. But whose fault is that? 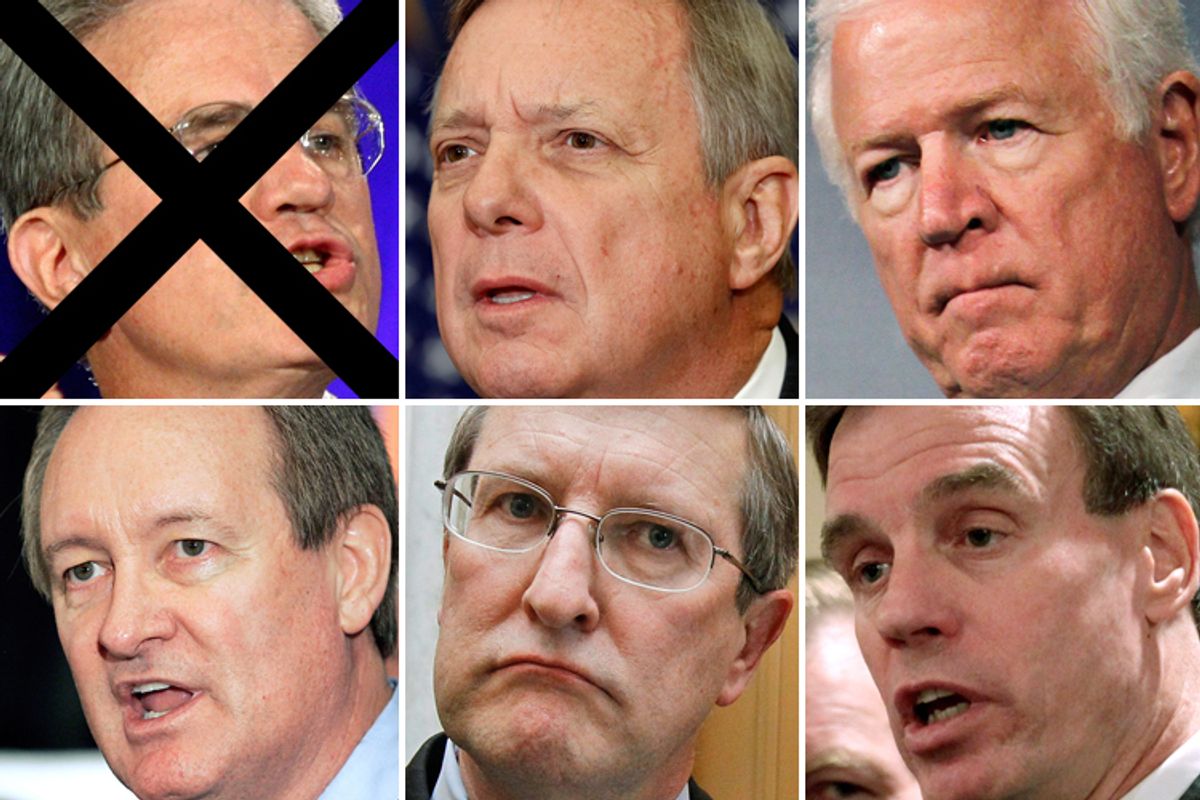 There is hypocrisy, and then there is hypocrisy, U.S. Senate-style. Oklahoma's Tom Coburn made news yesterday when he quit the so-called "Gang of Six" -- a bipartisan group of senators who had supposedly been making steady progress on a budget deal that would include cuts to entitlements and revenue increases. Democratic sources claim that in recent weeks Coburn had suddenly started piling up new demands for spending cuts that exceeded what he had previously agreed to. The last straw, apparently, was another $130 billion in Medicare cuts on top of $400 billion already on the table. Illinois Democrat Dick Durbin said no, and Coburn walked.

But Coburn provides his own side of the story in an op-ed piece in today's Washington Post, and it is a masterpiece. Coburn is deeply, deeply upset that nothing ever seems to get accomplished in the Senate! "Why has the U.S. Senate become the least deliberative 'greatest deliberative body' in the world?" he asks.

The lack of leadership and initiative in the Senate is appalling. As of this week, the Senate has held just 72 roll call votes this year, about one per legislative day on mostly noncontroversial and inconsequential matters. By this time last year, we had taken more than twice that number of votes (152). By this time in 2009, we had taken 192 votes. If we continue to avoid tough choices, we will lose control of our economic destiny and go down in history as the Senate that lost America. Our epitaph will read: Never before in the field of legislating was so much ignored by so many for so long.

Coburn blames Senate Majority Leader Harry Reid. But to the former obstetrician, it seems only fair to say, physician, heal thyself. Coburn's nickname in the Senate is "Dr. No." He is notorious for abusing Senate rules that allow a single senator to hold up legislation, even when that legislation has broad bipartisan support. He has routinely placed holds that prevented White House nominees for scores of administration appointments from ever getting to a vote, earning him yet another nickname, "holder-in-chief."

He is not alone, of course. The Republican minority in the Senate during Obama's administration will likely be remembered as the most obstructionist minority in the history of that august body. The Senate is broken, largely due to the abuse of procedural rules that have denied a substantial majority the ability to move legislation. Conservatives are no doubt inspired by this display of obduracy, but let's give credit where credit is due: Dr. No and his GOP compadres are the primary driver of the Senate's inability to govern. One obvious reason why 2011 has seen even fewer roll call votes than in the last two years is the shrunken Democratic majority, which gives the GOP even more latitude to stop any action in its tracks. The other is the parade of bills passed by the GOP-controlled House aiming to undo everything that the Senate accomplished in 2010 and 2009. Why should Harry Reid be holding votes on legislation that is doomed to fail?

In recent months, political pundits looking for a breakthrough in the budget deadlock have invested much hope in Coburn's apparent willingness to break with Republican orthodoxy and endorse revenue increases as part of a solution. And let's give him credit, in his op-ed he does acknowledge that "numerous polls indicate the vast majority of Americans would support the only type of plan that would ever make it out of Congress and be signed into law: one that favors spending cuts over revenue increases but includes both."

But he is being disingenuous when he suggests that Democrats are only interested in scoring political points through such recent gestures as the recent failed attempt to end oil company subsidies. The GOP leadership of both the Senate and the House have made it abundantly clear that they refuse to endorse any revenue increases as part of a deal. Instead, they demand huge cuts in social welfare services while standing steadfast in support of tax cuts for the wealthy and tax breaks for Exxon. There is no give in their position, and hasn't been since Obama took office. It takes two sides to make a grand bargain, and when one side isn't willing to deal, that's when you get gridlock.

But the icing on top of this unappetizing cake is Coburn's announcement that he will soon release details of a plan to cut $9 trillion in spending over the next ten years. That number is substantially higher than either of the proposals put forth by Obama ($4 trillion) or Paul Ryan ($6 trillion). If the Senate can't even get close to agreeing on a formula that meets those lesser goals, in what possible universe could it reach even higher? It's a laughable proposition, and a sign that Coburn is no longer serious about accomplishing anything budgetarily meaningful.