When I threw my boyfriend in front of a car

After I was hit by a taxi, I saw a darker side of myself I never knew existed 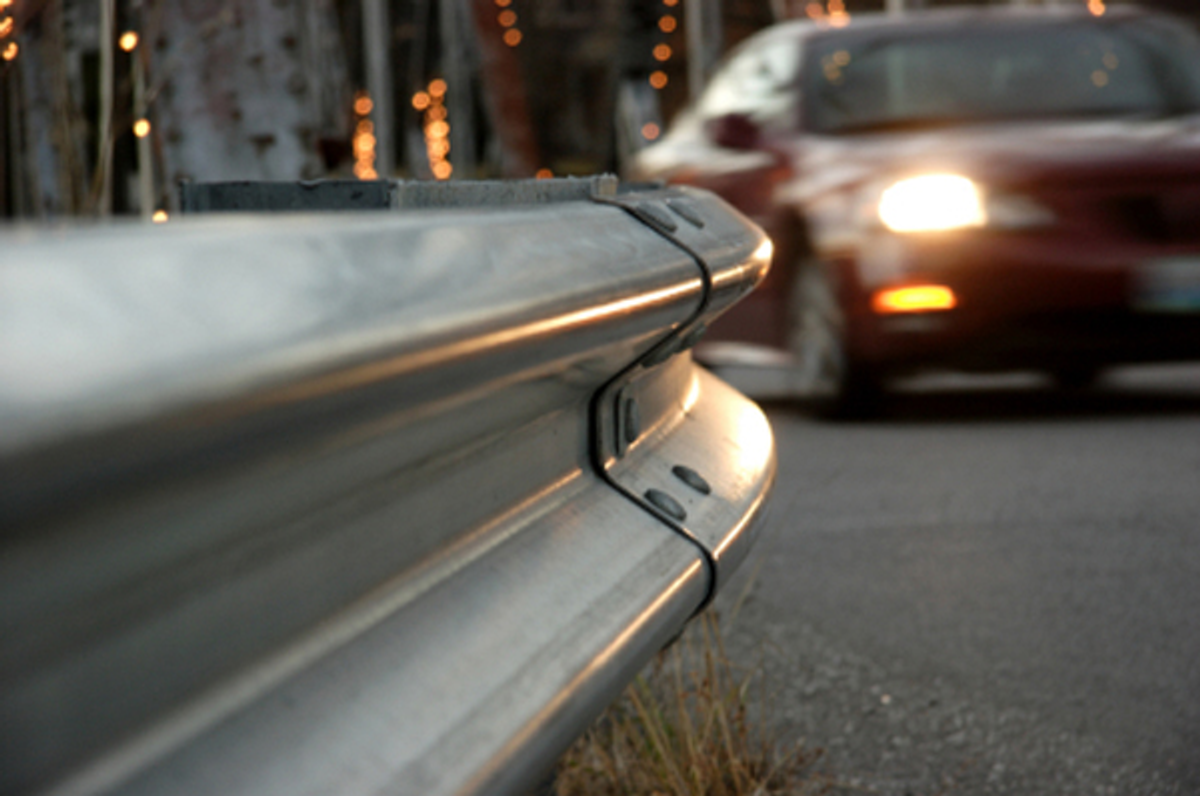 One Tuesday afternoon last January, I was crossing the street -- with the light in the crosswalk, mind you -- when a white Crown Vic taxi came barreling around the corner. I did what city folk usually do in this situation: I continued to walk as I turned and made eye contact with the driver. I thought we had an understanding. He was going to stop and I was going to glare and then we would get on with our days. Right?

Instead, the cab accelerated into me. I bounced off the hood of the cab and rolled on the ground in the gutter. This was definitely not the standard Chicago standoff I'd expected.

I started having dreams about the cab hitting me, the hard unyielding bumper hitting my legs, my head bouncing off the hood and then off the asphalt, rolling, scratching my hands up, the pop in my ankle. The way the engine sounded when it revved.

I became very hesitant to cross streets. At all. My boyfriend, Adrian, realized what was going on, and I tried to talk to him about it. It felt like I had been urbanized in some fundamental way. I told him about the time I saw a man crash through a plate glass window two doors in front of where I was walking. Another guy came out and started beating him up, and I darted away from the situation, keeping one eye on the whole thing while I dialed 911 and hailed a cab -- all of it without breaking a stride. I refused to be afraid back then. But this -- this had changed me.

Later, over margaritas at our favorite restaurant, Adrian gave me a little pep talk: Was I going to let one little Crown Vic ruin my life? Fill me with fear? What, was I going to just stay on my block for the rest of my life? NO! I was not. I would not be held captive by the fear that a cab would come out of nowhere and squash me.

We ordered another pitcher of margaritas, and Adrian let me get a little toasted, which was exactly what I needed. After we left the restaurant, we started to jaywalk diagonally across the street toward Adrian's car. He held my hand as he led the way. But even with all that liquid courage, he still had to pull me along a bit. I checked the traffic coming both ways in a fidgety, nervous way. And then I'd check again. And Adrian just kept tugging me along.

Suddenly, out of nowhere, a white Crown Vic taxi came bearing down on us from the right. I panicked. In that moment, I could feel the cab hitting me again. Every detail of the event played out in my mind: the hard bumper, the cold metal hood under my hands as I rolled off of it, hitting the ground and the awful, awful snap in my leg.

And so, without thinking, I yanked Adrian in front of the cab, and ran to safety.

Of course, as it turned out, the car was not as close as I thought. And it wasn't a white Crown Vic, but a blue Honda Civic. And it stopped politely, several yards away, so Adrian could straighten up from where he had almost fallen in the middle of the street and walk back to me. But none of that changed the ugly reality of what I had done: I had just thrown my boyfriend in front of a car to save myself.

I felt like someone had punched me in the stomach. I cried and apologized and told Adrian I was an asshole (he agreed). But, because he's a good guy, he took my hand again and walked me to the car; he opened the passenger door and helped me in. We rode home in silence. He dropped me at my front door, made sure I was inside, and drove away.

I had always thought of myself as tough, loyal, fair and brave. The usual things people like to think about themselves. But if adversity reveals character, I had just revealed mine: I would sacrifice someone I cared about to survive.

A few days later, I finally had the surgery on my Achilles tendon. And Adrian was a good sport through all of it. He visited me while I was housebound because the snow was too heavy to navigate on crutches. He picked up my prescriptions at the drug store. When I became more mobile, he would walk slowly next to me as I limped along in my walking cast.

But something had changed between us. We both knew that for whatever reason -- PTSD, cowardice or a heightened fight or flight instinct -- I had sacrificed him to save myself.

We broke up shortly after my cast came off. When I looked in his eyes, I could see that expression of horror on his face as I yanked him past me into the path of the car. I saw it over and over again, my own relationship PTSD. In the end, he might have been able to get over my weakness, but I couldn't. I needed a fresh start with someone who hadn't seen the worst in me. Another selfish act of self-preservation? You bet.