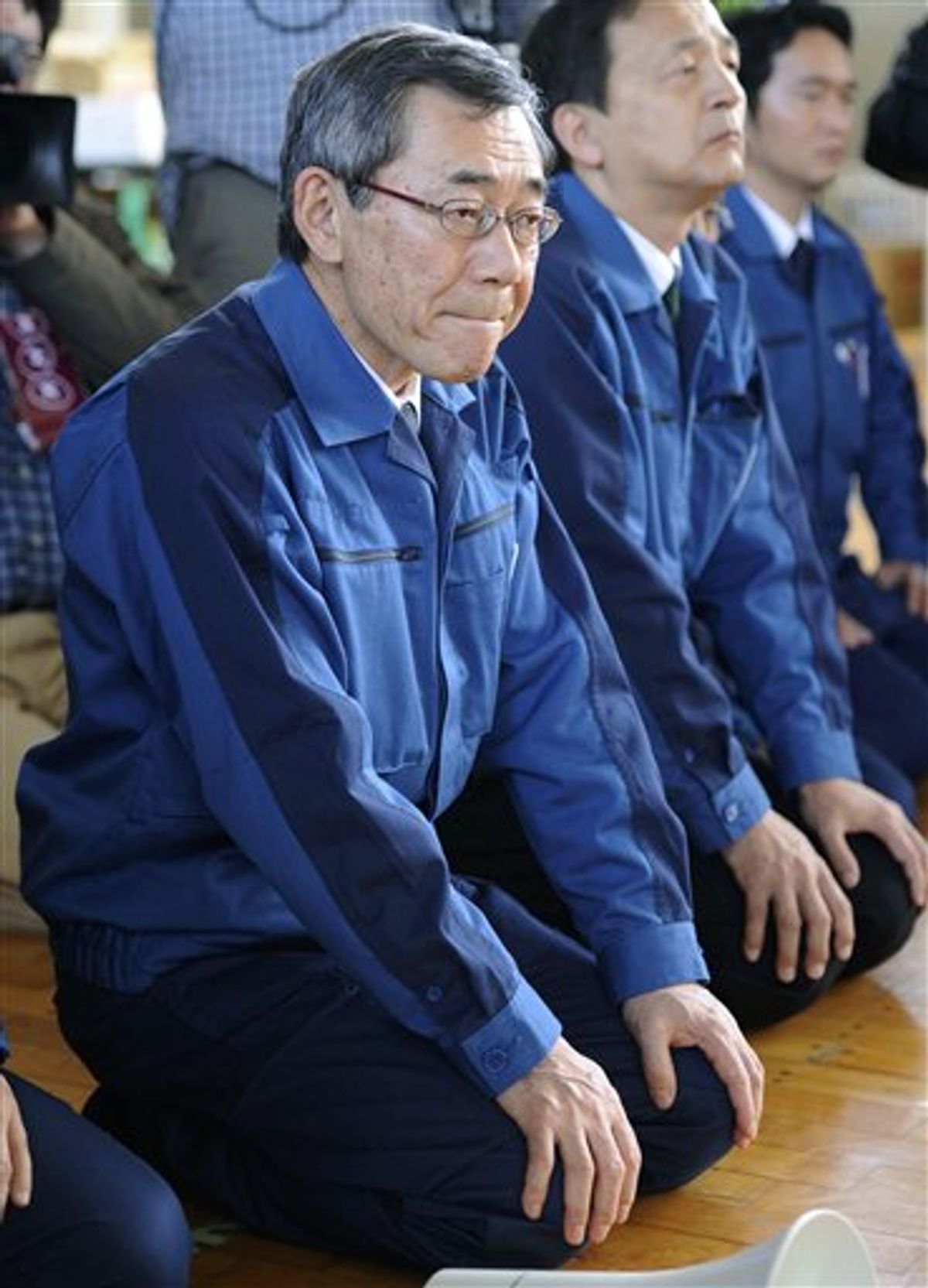 The president of the Japanese utility behind the world's worst nuclear disaster since Chernobyl said Friday he was stepping down in disgrace after reporting the biggest financial losses in company history.

Tokyo Electric Power Co. President Masataka Shimizu, criticized for his low profile during the disaster's early days, said he was resigning to take "responsibility" but vowed that the utility would continue doing its "utmost" to bring the Fukushima Dai-ichi plant under control.

Fuel rods appear to have mostly melted at three of the plant's reactors after a March 11 earthquake triggered a tsunami that knocked out cooling systems. Leaking radiation has prompted the evacuation of thousands of residents, and the perilous struggle to contain the reactors is expected to continue into next year.

The crisis raised serious questions about the lax oversight of Japan's nuclear industry, and prompted the country to scrap plans to rely on nuclear power for one-half its electricity needs -- up from its current one-third.

"I am resigning for having shattered public trust about nuclear power, and for having caused so many problems and fears for the people," Shimizu told reporters, bowing in a traditional Japanese apology during a news conference.

"I wanted to take managerial responsibility and bring a symbolic close," he said.

Shimizu's resignation was widely anticipated because heads of major Japanese companies are expected to step down to take responsibility for even lesser scandals and problems. He had responded to earlier calls for his resignation by saying he needed to stay on to put efforts to contain the crisis on the right track.

Shimizu had come under fire for going missing from the public eye when the problems at plant initially surfaced, and then later checking into a hospital, although TEPCO never disclosed details of his ailments.

TEPCO has been criticized for being unprepared for the tsunami despite some scientific evidence that earthquake-prone Japan could be hit with a wave of that size. It has also been criticized as slow and lacking transparency in disclosing information about the plant's problems.

Renewed safety fears have caused the government to shutter the Hamaokoa nuclear plant in central Japan, a region where a major earthquake is expected with nearly 90 percent probability in the next few decades.

TEPCO reported that its losses for the fiscal year ended March 2011 totaled 1.25 trillion yen ($15 billion) -- one of the biggest annual financial losses ever for Japan's corporate world. TEPCO had a profit of nearly 134 billion yen the previous fiscal year.

Overall losses from the disaster are expected to be far bigger, including compensation for the thousands of people forced to evacuate from their homes around Fukushima Dai-ichi, and businesses such as farms that say products were damaged by radiation.

The company plans to sell its assets to secure more than 600 billion yen ($7.4 billion) in funding, but acknowledged it still could not assess the amount of damage payments.

"We will face a huge influx of compensation claims, but we don't know their scale," Shimizu said.

The quake and tsunami, which left 24,000 people dead or missing, damaged farms, ports and hundreds of suppliers. Those two disasters plus the nuclear crisis have pushed Japan's economy back into recession, government data show, as factory production and exports stagnate.

The TEPCO board of directors promised to take no pay, and other executives will return from 40 percent to 60 percent of their paychecks, the company said.

But TEPCO must also shoulder the costs of resolving the problems at the reactors, as well as restarting other kinds of power plants, which aren't nuclear, to make up for the electricity shortfall.

The government has been studying possible bailouts, including using contributions from other utilities and taxpayer money to help TEPCO deal with the towering costs.

Replacing Shimizu, 66, as president is Toshio Nishizawa, 60, another TEPCO executive.

"Our company faces an unprecedented crisis. I feel I am shouldering an extremely heavy responsibility," Nishizawa said.

Chairman Tsunehisa Katsumata, 71, a former president, who took on a leadership role since the crisis, especially while Shimizu was absent, is staying on, in an apparent effort for continuity in tackling the crisis.

Shimizu said he will stay on as adviser indefinitely, without pay. The appointments become official after a shareholders' meeting in June, according to TEPCO.

Moody's Japan has warned it could further downgrade its debt rating for TEPCO to junk bond status if commercial banks forego on their claims for loans. Earlier this month, Moody's lowered its rating by two notches to a level just above junk status.

Analysts say that all the bowing and resignations in the world can't fix the nuclear plant.

"This is a very difficult task," said Mamoru Katou, an energy analyst at Tokai Tokyo Research, adding that doubts are growing about the utility's promise to bring the plant under control in nine months. "No one really knows."

Associated Press writers Shino Yuasa and Mari Yamaguchi contributed to this report. Yuri Kageyama can be reached at http://twitter.com/yurikageyama