Five political books that were doomed before they were even published 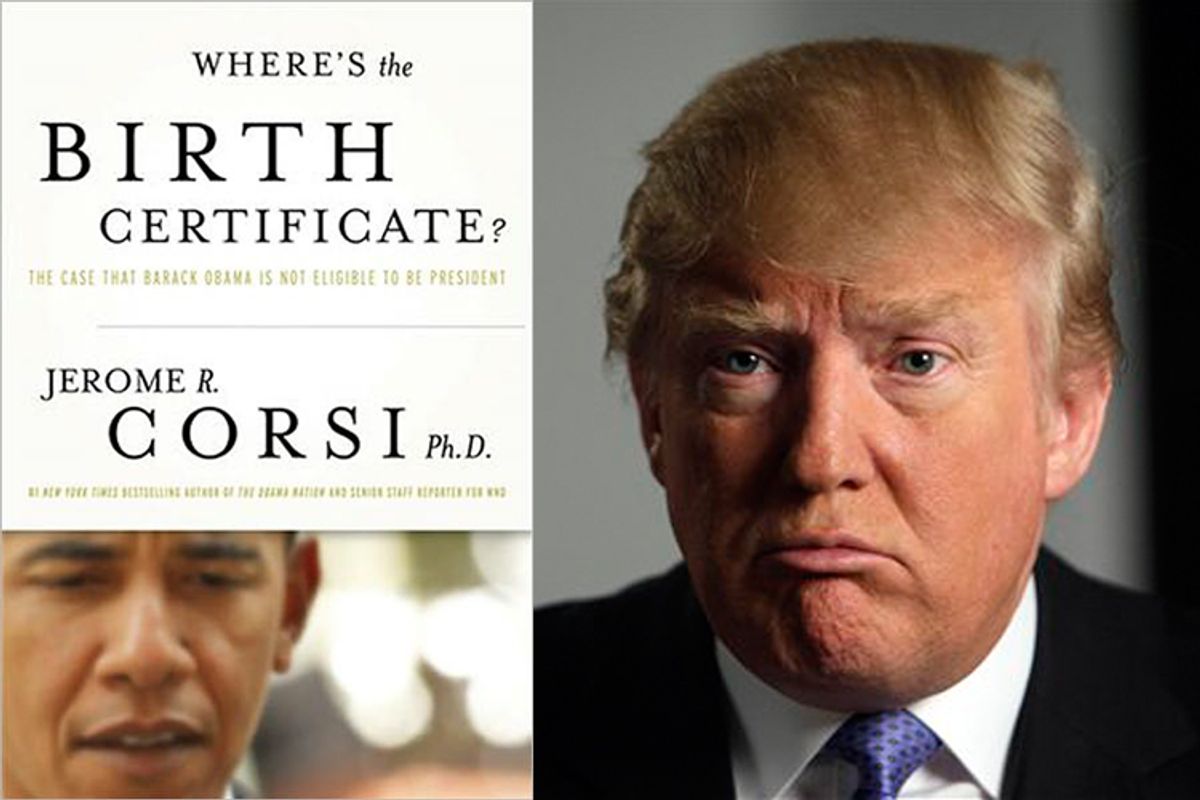 On May 12, it was reported that Donald Trump was working on a "policy book," to be released this summer by the right-wing Regnery Publishing. No surprise there: All candidates and would-be candidates for president release either memoirs or policy books, or both. On May 16, less than a week later, Trump announced that he will not be running for president. Whoops! Now that book is pointless, months before the ghostwriter has finished it.

Trump's is not the first, and will not be the last political book that was rendered ridiculous or blatantly incorrect before or very shortly after its release. It's not even the only one released this year! Here are some of our favorite sad, wrong books:

Oh, there it is! Sorry, Jerome Corsi, but you couldn't have realized that your entirely pointless search for the "long-form" birth certificate would end nearly a month before your book's publication.

Corsi has a lot of other arguments against the president's constitutional eligibility (he's British!), but there's no getting around the fact that the title of the book has been rather definitively answered.

Shameless Republican P.R. guru Jim Wilkinson, inventor of the entirely false Jessica Lynch story, went to work for Condoleezza Rice when Rice took over at the State Department. He did his usual effective if slightly heavy-handed image management. The lowlight was probably when he literally slipped a note to Washington Times editorial page editor Tony Blankley asking if Rice planned to run for president, a thought that had not yet occurred to anyone, because Rice had never run for anything.

While the Beltway press entertained the notion, because it was fun to play pretend, only one man wrote a book about how Condi must run for president, because she and only she could beat Hillary Clinton, who was a 100 percent lock to win the Democratic nomination. That man: Dick Morris, who is wrong so often about so many things that it's hardly worth pointing it out anymore, except for the fact that this book is such an amazing time capsule of a bizarre time in American politics.

Rice never expressed any interest whatsoever in running, making this book irrelevant before it was ever written.

Just go back and read this fawning tribute to the influence and genius of Matt Drudge that ABC News published to promote this book upon its publication. "The Way to Win" posited that a campaign based around sucking up to Drudge and emulating Karl Rove in every way was the key to victory in 2008. A month after this lengthy tribute to his infallible genius came out, Rove suffered the humiliation of the 2006 midterms.

"The Good Fight: Why Liberals -- and Only Liberals -- Can Win the War on Terror and Make America Great Again," by Peter Beinart, 2006

Peter Beinart is the former editor of the New Republic, and under his leadership, that magazine really, really loved war, a lot. (He is also responsible for the New Republic endorsing Joe Lieberman in 2004, which even sometime owner and all-time nutjob Marty Peretz thought was a bit odd.) Beinart went all-in on the Iraq War, and his magazine spent much more time and energy berating antiwar liberals than it did questioning the Bush administration's claims about Saddam Hussein's weapons of mass destruction. After John Kerry lost in 2004, Beinart was pretty sure it was the fault of squishy antiwar Democrats, and Michael Moore.

And so he expanded his essay on the subject of how antiwar liberals are as bad as Communists, plus they love terrorism, into a book, about how Democrats must once again embrace complete and total war, everywhere, like they did in the good old days of the Cold War.

Of course, on the way to filling out his Very Important Foreign Policy book, the Iraq War got worse and worse, and the extent of the Bush administration's malfeasance became clearer and clearer, so Beinart is a bit apologetic about having been dead wrong about the defining foreign policy issue of his time as a serious and respected political thinker. (He is currently a "senior fellow" at the Council on Foreign Relations.)

Being antiwar helped the Democrats generally in the 2006 elections and a candidate who spoke out against Iraq from the very beginning ended up actually winning the presidency in 2008. (Whereupon he began acting a bit Beinartian, so maybe Peter got the last laugh, as the Democrats who take "tough stands" against pinkos usually do.)

"The Bush Boom: How a Misunderestimated President Fixed a Broken Economy," by Jerry Bowyer (foreword by Larry Kudlow), 2003.