About that claim that tax cuts boost the economy...

You'd never know it from the debate taking place in Washington, but the evidence isn't very strong 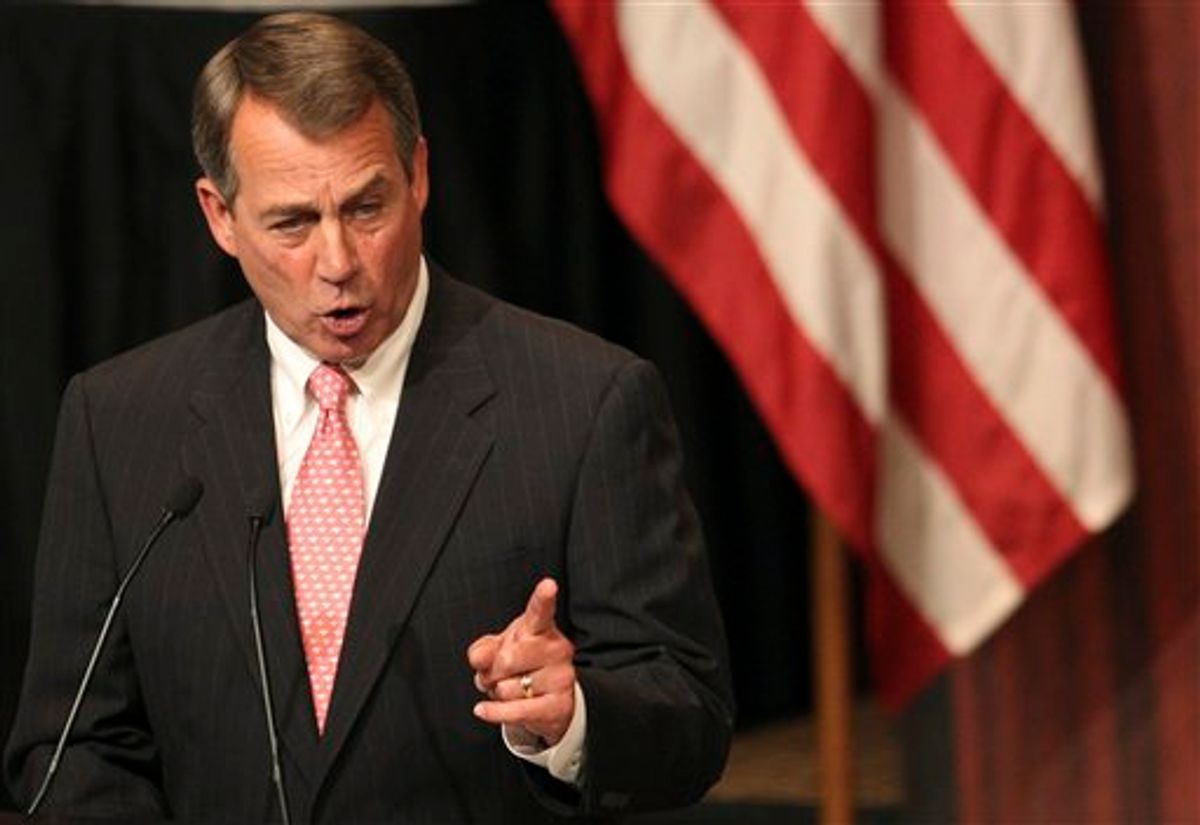 U.S. House Speaker John Boehner gestures as he addresses the Economic Club of New York in New York, Monday, May 9, 2011. The Economic Club of New York is a non-political, non-partisan and non-profit organization with members from the executive levels of business, industry and finance. Its mission is to promote the study and discussion of social, economic, and political questions. (AP Photo/Kathy Willens) (AP)
--

As the administration and members of Congress debate the path to fiscal sustainability, my colleagues and I at CBPP have consistently stressed the importance of a balanced plan that combines both spending cuts and revenue increases.

But mention "revenues" in this town and you trigger the attack of the NASTIE’s (Never-A-Stinkin'-Tax-Increase-Ever!).

Their typical argument is that any increase in tax rates will do irreparable harm to the economy by killing peoples’ incentives to work and invest.

It’s an old argument, prominent in the Reagan years, when the tradition of tax cuts leading not to unbridled growth but to large budget deficits got started. But it was most fully developed in the GW Bush years, when it led to tax cuts that helped to turn a budget surplus into the persistent deficits that dominate the fiscal scene today.

OK, so tax cuts don’t magically balance budgets. But do they boost growth and jobs?

Um…no. As my colleague Chad Stone shows here in comparing the 1990s (Clinton’s tax increase) and the 2000s (Bush’s cuts), the opposite is true.

I think those two decades make for an excellent natural experiment, but you may be thinking "Wait a minute, that’s just two time periods."

The scatterplot below plots the top marginal tax rates on the x-axis against real GDP growth on the y-axis. Only the nastiest of NASTIE’s could stare at that picture long enough to see anything non-random. [In fact, if you run a regression you actually get a significant and positive coefficient, suggesting higher marginal rates are correlated with higher growth rates. But don’t get excited. That result is driven largely by the three dots in the upper right hand quadrant when, during the war effort, government goosed the economy and high rates helped pay the freight (see table). (Imagine that—asking high-income households to pay more for the war, as opposed to asking them to pay a lot less. What were they thinking back then?)

What’s that? You want more. How about the same graph re unemployment? Again, if anything, there’s a drift to the lower right of the chart, suggesting higher rates correlate with lower unemployment. To be clear, this is “blogometrics” not econometrics, i.e., the economy over these many years has vastly different moving parts, there are timing lags, causation issues (recall war point above; also if policy makers lower taxes when growth is weak, as in the Recovery Act, you’ll get patterns like the above), Federal Reserve policies that can amplify or counteract tax effects, the tax system is way more complex than can be captured with just the top rate.

And no question, it is of course the case that big tax increases could derail growth, though that’s not what anybody’s talking about (President Obama’s proposal to allow the highend Bush cuts to sunset would still leave taxes lower than in Clinton years). In fact, the economic impact of tax changes is an important area of inquiry and the simple evidence I’ve presented here is not at all intended to be the last word.

But that said, the point is this: the historical record is extremely hostile to the NASTIE’s. Based on that record, if they continue to insist that revenues must stay off the table in the budget negotiations, they need to find another reasons than growth or jobs.