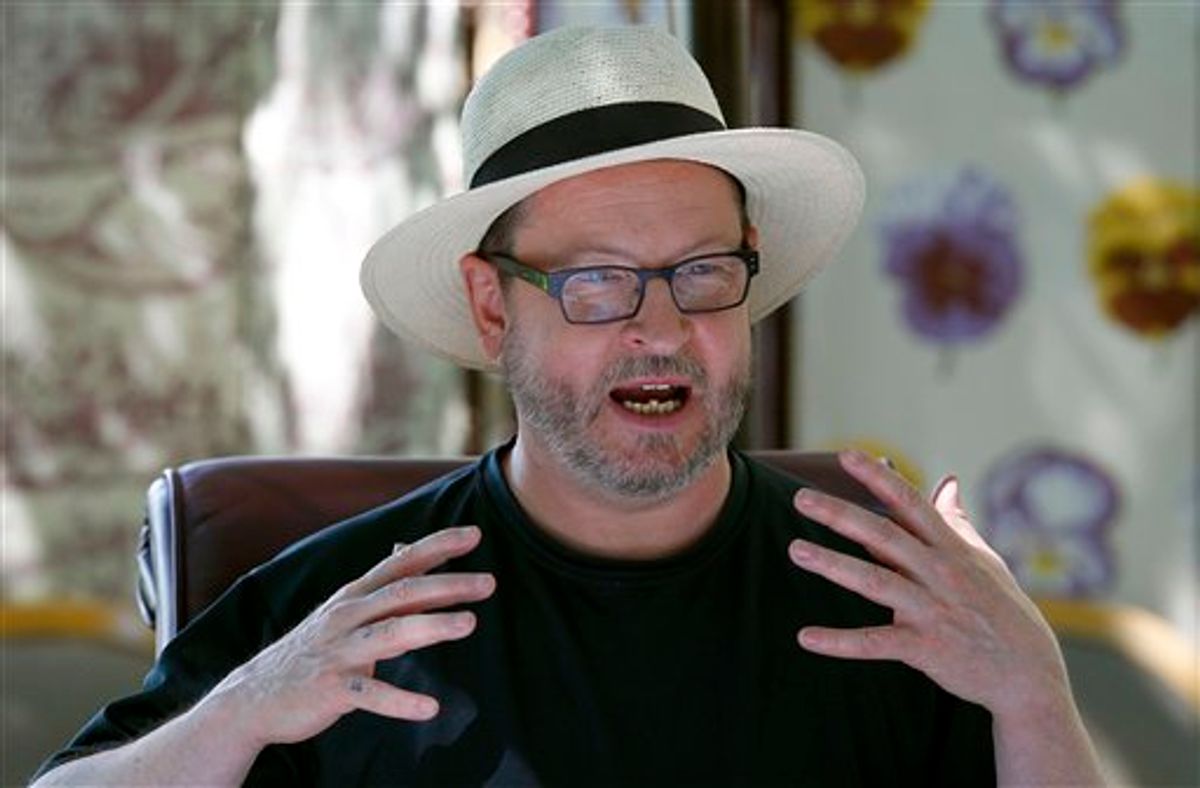 Director Lars Von Trier poses for photos during an interview in Mougins, southern France, Friday, May 20, 2011. On Thursday, May 19, 2011 the Danish filmmaker was booted out of the Cannes Film Festival for a bizarre, rambling news conference in which he said he sympathizes with Adolph Hitler. (AP Photo/Francois Mori) (AP)
--

Lars von Trier remains contrite and respectful of the Cannes Film Festival over its decision to toss him out for saying he sympathizes with Adolf Hitler.

Yet the Danish filmmaker also relishes the new label he gained as the world's most-prestigious cinema showcase ostracized one of its favorite sons.

"I must say, 'persona non grata' is a wonderful word," von Trier said Friday, a day after Cannes organizers banned him from the rest of this year's festival for his comments about Hitler, Nazis and Jews at a press conference for his festival film "Melancholia."

"It has a sweetness to it that I can't deny. I'm not at all happy about what happened, but the word is something like an order you get," said von Trier, gesturing as though pointing out a medal pinned to his chest.

Overnight, von Trier has gone from celebrated Cannes veteran to a pariah no longer welcome at the festival that bestowed its highest honor, the Palme d'Or, in 2000 for his drama "Dancer in the Dark."

The festival's board of directors branded him "persona non grata," and while "Melancholia" still is eligible for the Palme d'Or and other prizes, von Trier would not be allowed into Sunday's closing ceremony even if the film wins awards.

At the news conference Wednesday, von Trier said that while Hitler "did some wrong things," he could understand the Nazi leader and "sympathize with him a little bit." He quickly added that he supported the Jews but then wisecracked, "not too much, because Israel is a pain in the ass."

Von Trier issued an apology and said he was only joking, but the remarks brought a volley of condemnation from Jewish and Holocaust groups.

The stars of "Melancholia," including Kirsten Dunst and Charlotte Gainsbourg, sat uncomfortably through von Trier's remarks during the press conference. At one point, Dunst whispered to von Trier, "oh, my God, this is terrible."

"I'm sorry about it for my own sake, and then I'm sorry about the people, if I've hurt people," von Trier said. "That was not the intention at all. I'm very sorry for that. That was completely stupid."

His expulsion from the festival has not kept von Trier, a provocateur at heart, from holding court with reporters to publicize the film at a hotel just outside Cannes.

Von Trier has sharply divided Cannes critics in past years with films that some viewed as subjugations of women, among them pop singer Bjork's "Dancer in the Dark" and Nicole Kidman's "Dogville." Von Trier's "Antichrist," which won the festival's best-actress prize for Gainsbourg two years ago, incensed some Cannes viewers with its torture-porn images.

"Melancholia" has had a more gentle reception, a portrait of two sisters (Dunst and Gainsbourg) coming to grips with their family foibles as a rogue planet heads on a possible collision course with Earth. The film has received mixed reviews but has not polarized Cannes crowds the way some of von Trier's past entries have.

Von Trier himself has proved the polarizing presence. The filmmaker said he understands and accepts his banishment by festival organizers, who have not said if von Trier would be invited back in future years.

"I have very good love for them, and I think that what I would miss the most was to be in contact with these people," von Trier said. "I've benefited so much from Cannes."

Von Trier sought to explain what he meant when he said he sympathized with Hitler. He said the German film "Downfall," starring Bruno Ganz in a chronicle of Hitler's last days, had given him insight into the dictator and put more of a human face on him.

"Of course, I don't sympathize with what Hitler had done," von Trier said. "The only thing I said was that I, after seeing Bruno Ganz in the bunker, could kind of see a little human being sitting there. And I thought, that was very good, because I think that there's a little bit of a Nazi in all of us, and there's a little bit of a human being in Hitler, and I think to think otherwise is dangerous."

Von Trier said he might avoid press conferences from now on, saying that he could make his meaning clearer talking to reporters in small groups or one-on-one.

He also said if he had been speaking in his native Danish, he could have made his meaning far plainer.

"It makes it much easier to condemn me for my English," von Trier said. "And then people would say, 'Why doesn't he just shut up?' And I agree with them."