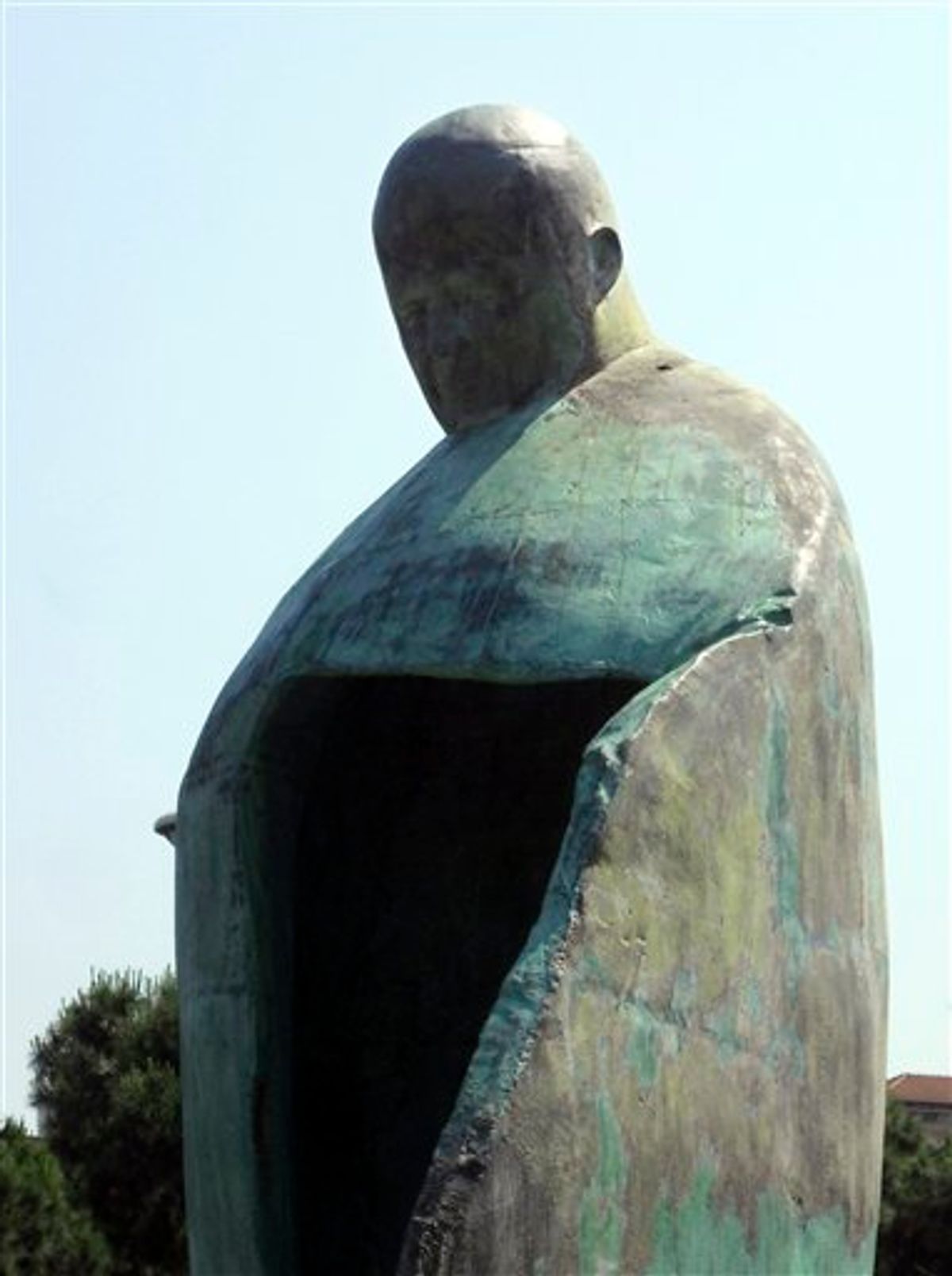 A giant bronze sculpture portraying Pope John Paul II is displayed outside Rome's Termini train Station, Friday, May 20, 2011. The Vatican is dismayed by a giant new sculpture portraying Pope John Paul II, saying the towering bronze work outside Rome's main train station doesn't even look like the late pontiff. Vatican newspaper L'Osservatore Romano says Friday the towering modernistic statue gives the impression a bomb hit the square. The artist, Oliviero Rainaldi, depicts the pontiff as if he is opening his cloak to embrace faithful. But the Vatican says the effect is more like a police sentry box than of a welcoming pontiff. (AP Photo/Marco Guerrieri) (AP)
--

"How could they have given such a kind pope the head of a Fascist?" said 71-year-old Antonio Lamonica, in the bustling square outside Termini Train Station. As he pondered the statue, his wife muttered, "It's ugly, really ugly, very ugly."

The artist, Oliviero Rainaldi, depicts the pontiff as if he is opening his cloak to embrace the faithful.

But the Vatican says the effect is "of a mantle that almost looks like a sentry box, topped by a head of a pope which comes off too roundish."

Rome Mayor Gianni Alemanno, asked by APTN in an exclusive interview in his office if the city might take down the statue, said public opinion would be considered.

"There's an ancient saying: 'Vox populi, vox dei' (Latin for voice of the people, voice of God)," Alemanno said. "And from this point of view we cannot help but take into consideration the opinion of the public."

"And if public opinion consolidates around a negative opinion, we'll have to take that into consideration," the mayor said.

While acknowledging that the work is a modern one, and describing as "praiseworthy" the city of Rome's initiative to erect the tribute, the Vatican said "the statue's sin" is that it is "hardly able to be recognized."

The statue, paid for by a foundation at no cost to the city of Rome, was erected a few days ago, to mark what would have been John Paul's 91st birthday, on May 18. Pope Benedict beatified John Paul, the last formal step before sainthood, on May 1, at a ceremony drawing about 1 million admirers to Rome.

The website of the Silvana Paolini Angelucci Foundation, which is dedicated to humanitarian efforts and which donated the statue, makes no mention of the controversy. Neither the foundation nor the artist could be reached immediately for comment.

Comments of passers-by in the square Friday largely echoed those on Rome daily Il Messaggero's website, where 90 percent of respondents told the paper's online questionnaire that they didn't like the statue.

The sculpture "doesn't speak to me," said Gracia Gonzalez Sanchez, from the Spanish coastal city of Malaga. "I can't recognize the pope. It could be a cardinal or anyone else. I think they should have put a crucifix or some other symbol related to him," she told The Associated Press.

Fausto Durante, a 58 year-old from southern Puglia who commutes to Rome twice weekly for work, said the statue wasn't bad but it just shouldn't be in a public square.

"Millions of people pass by this place every day, and you need something you can recognize. If the artist wants to do conceptual art, he would aim for a museum, not a public place where the faithful want to recognize their pope," Durante said.

He started to walk away, but turned back to say: "I want to add that its profile looks like Mussolini.

The city noted that Vatican culture officials had seen a sketch of the work and approved it.

Vatican spokesman, the Rev. Federico Lombardi, confirmed that the sketch "received a positive opinion by the culture commission" of the Holy See. What happened between sketch stage and the final result, he couldn't say.

A Rome cleaning woman ventured some practical objections, as well as artistic. "With the shape of a cape, sooner or later the homeless people at the station will sleep inside it, and in no time, it will be full of bottles of beer," said Grazia Liberti, 46, returning home after her night job.

(This version corrects that Malaga is a coastal city, not an island.)