Blaming his bad week on mean reporters, he placates the right wing by saying he'd vote for the Ryan budget 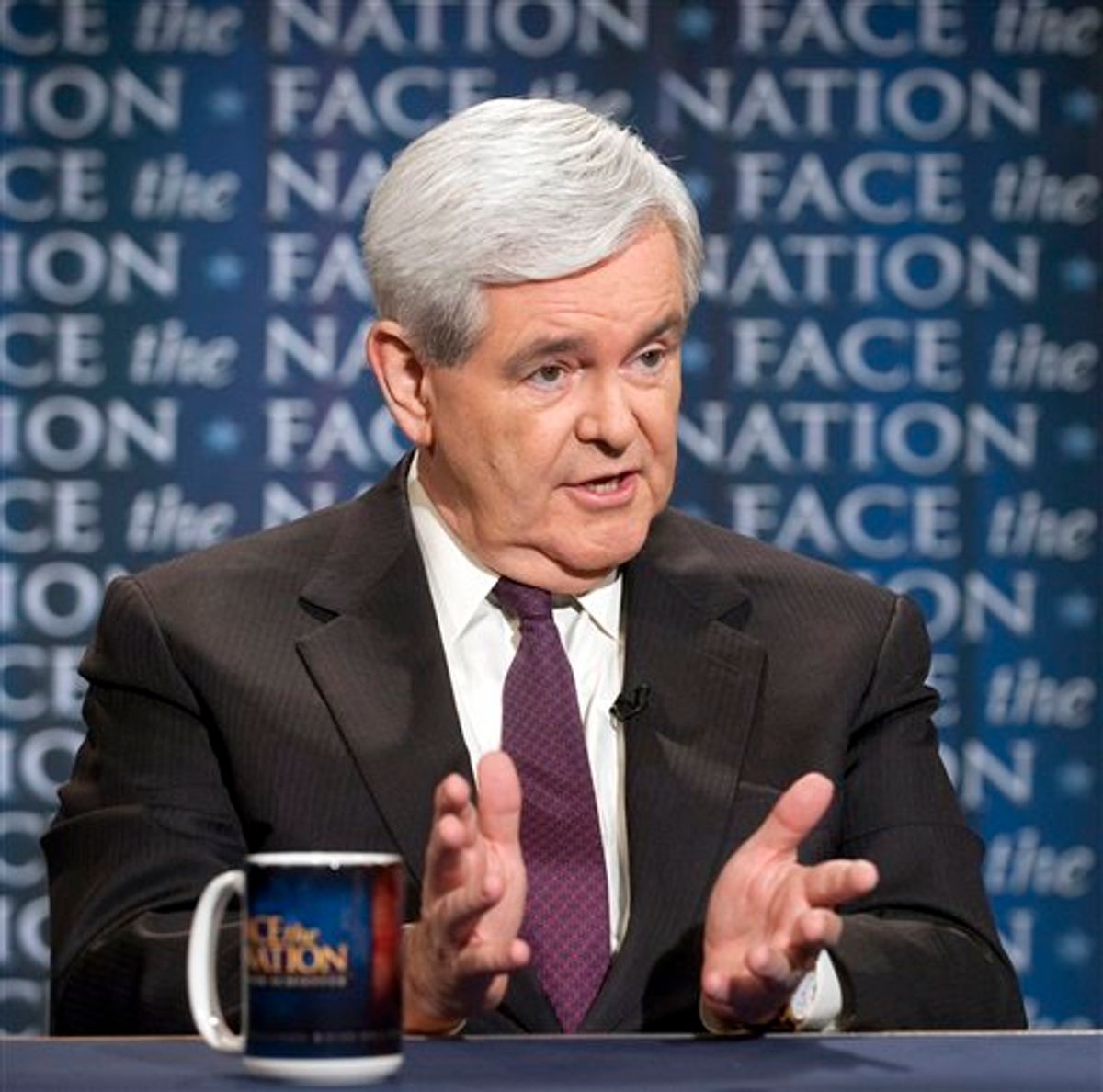 If it's Sunday, it must be time for another Newt Gingrich go-round with the Sunday shows, as he continues to try to clean up the mess he made last week on "Meet the Press." After denouncing Paul Ryan's Medicare slashing to David Gregory last Sunday as "right-wing social engineering,"  and expressing support for an individual mandate on health insurance (a once-popular Republican idea), Gingrich spent the week backtracking and apologizing. GOP leaders strafed him with criticism: "Some say he's finished," House Majority Leader Eric Cantor intoned; even former staffer Rich Galen complained that Gingrich's presidential campaign might be "functionally over" if it didn't get some "adult supervision."

So Gingrich went on CBS's "Face the Nation" Sunday to try to act the adult and proclaim himself a believer in the Ryan plan – so much so that he says he'd vote for the whole Ryan budget, which would not only slash Medicare into a voucher program but slash taxes on the rich and open up an even bigger hole in the federal deficit. But he hedged a little.

"The American people have to have time to ask us questions, to modify the plan if necessary, to get to a point where people are comfortable with it," Gingrich told CBS. "I probably used unfortunate language about social engineering. But my point was really a larger one that neither party should impose on the American people something that they are deeply opposed to."

He "probably" used unfortunate language? Gingrich may find himself in trouble again.

For his part Ryan went on Meet the Press himself to call Gingrich's description of his proposal "deeply inaccurate" and a "gross mischaracterization." But he expressed a willingness to forgive the Gingrich gaffe (yes, gaffe in the sense that Gingrich made the mistake of saying something he truly believes, that got him into big trouble). "We've got to get beyond this," Ryan said. "And we've got to get onto a serious conversation about what it takes to fix the fiscal problems in this country. And if we don't tackle these problems now while we have time, they're going to tackle us."

I discussed Gingrich's gaffe on CNN's Reliable Sources Sunday, where conservative David Frum made the valid point that Gingrich's self abasement was particularly sad to watch, because the ultimate GOP presidential nominee in 2012 is going to have to take the same exact stand on Ryan's Medicare pipedream that Gingrich did – or go down to certain defeat. Frum may be an optimist: I don't see anyone in the current GOP pack who appears to have the fortitude to say unpopular things to the right-wing base.

We also discussed Gingrich's sad attempt to blame his troubles on the gotcha media – as though David Gregory's question about the Ryan plan was some unfair trick. (John Lithgow gave a devastating dramatic reading of Gingrich's media-blaming statement on the Colbert Report this week.)

What a big baby Gingrich is. Here's the video: