What do they say when the appointed hour comes and goes ... and nothing happens? 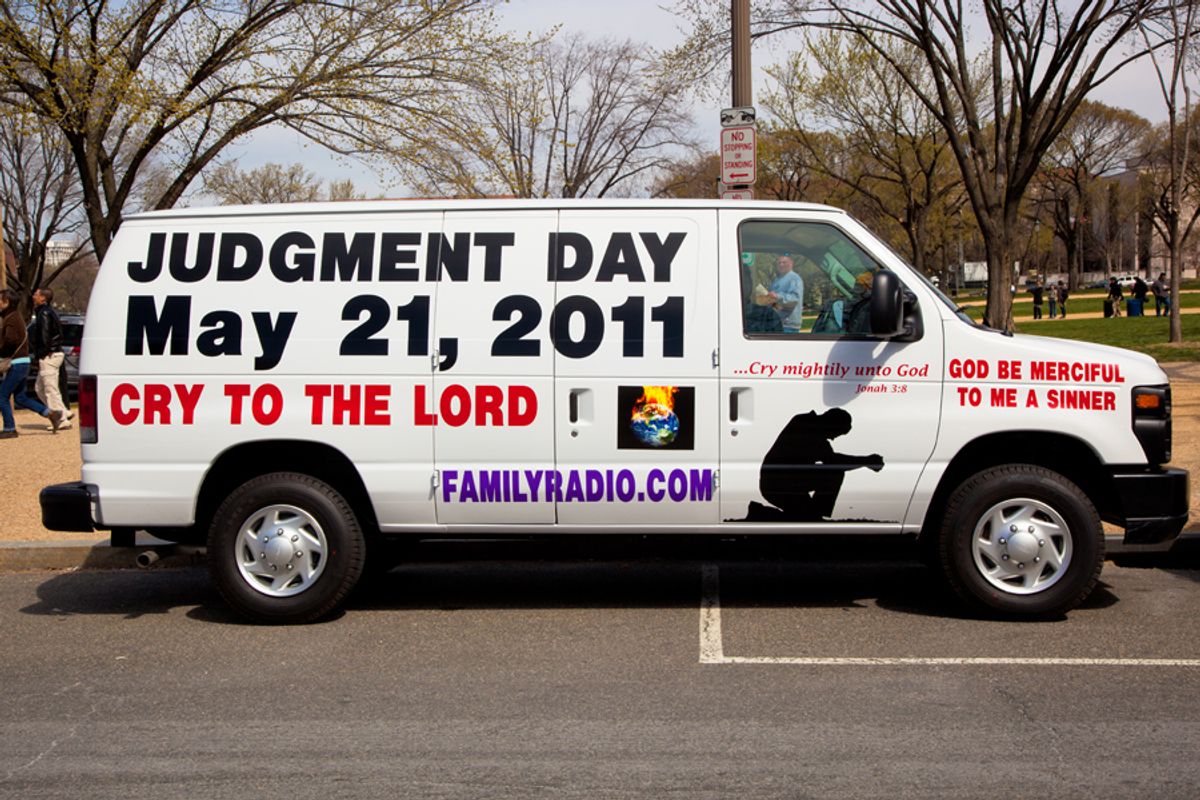 There's a line in the book of Matthew that doomsday prophets like Harold Camping -- the 89-year-old who promised the world would end on Saturday -- always seem to ignore: It says that nobody knows the actual day or the hour, not even Jesus or the angels.

It's a line that serves as a reminder that nobody can know the mind of God. But it clearly hasn't stopped Camping and his ilk from trying. In honor of Camping's (latest) doomsday flameout, here’s look at some of the (many) other apocalyptic forecasts that failed to materialize -- and at the morning-after excuses those false prophets offered. (Or, since I'm actually writing this before Saturday, perhaps it’s documented evidence of how I ended up on the wrong side of the biggest I-told-you-so in history ...)

This is who you should thank: Dorothy Martin’s end of the world predictions were bizarre even by the high standards of doomsday forecasting. She claimed to have received psychic messages from aliens on the planet Clarion informing her that she and her followers would be beamed-up to a flying saucer on Dec. 21, 1954. This was good news for them -- according to Martin, everyone else on Earth would be left to drown like rats in a terrible flood. As is customary, her followers quit their jobs, gave away everything and spent the days leading up to the flood in fervent prayer. Instead of offering a mea culpa when nothing happened, Martin took credit for mankind’s salvation. She said it was her devotion to the Clarion-ites that saved the Earth from destruction.

Harold Camping redux: As Salon’s Steve Kornacki detailed here, the Family Radio front-man has been in the business of terrifying small children since at least the early '90s. His peculiar brand of science and math last led him to declare that the world would end on Tuesday, Sept. 6, 1994. But Camping had a built in excuse -- his book was titled "1994?" and was therefore not an absolute declaration of the Armageddon. But 17 years later, the Camping pamphlet I received had no such equivocations.

88 reasons why he was wrong: Edgar Whisenant wrote a bestselling book called "88 Reasons Why the Rapture Will Be in 1988." He initially bought himself a little bit of wiggle room by predicting the horsemen to ride sometime between Sept. 11 and 13 of that year. When it did not come to pass, he revised his dates, first by a few days, and then by a few weeks. Whisenant cited various oversights, such as Rosh Hoshana needing to be complete all over the world, not just in Little Rock, Ark. (the time zones paradox). Despite his clear lack of authority on the matter, the following year he published "The Final Shout: Rapture Report 1989," and continued selling millions of these books with the same title and a revised year through 1993.

Perhaps this is how it should be done: Michael Stifel was an ambitious young German monk whose apparent capacity for numerical mysticism and cabalistic interpretation landed him in a great deal of trouble. Despite his fellow clergymen’s attempts to get him to shut up about it, Stifel proselytized that the end of the world would come on Oct. 3, 1533, at precisely eight o’clock in the morning. His congregation was appropriately freaked out by this news, so when the hour came and went, he was summarily ejected from his ecclesiastical quarters and flogged in the streets.