We talk to Joel Kinnaman, whose dirty-sexy Detective Holder is one of the suspenseful show's greatest pleasures 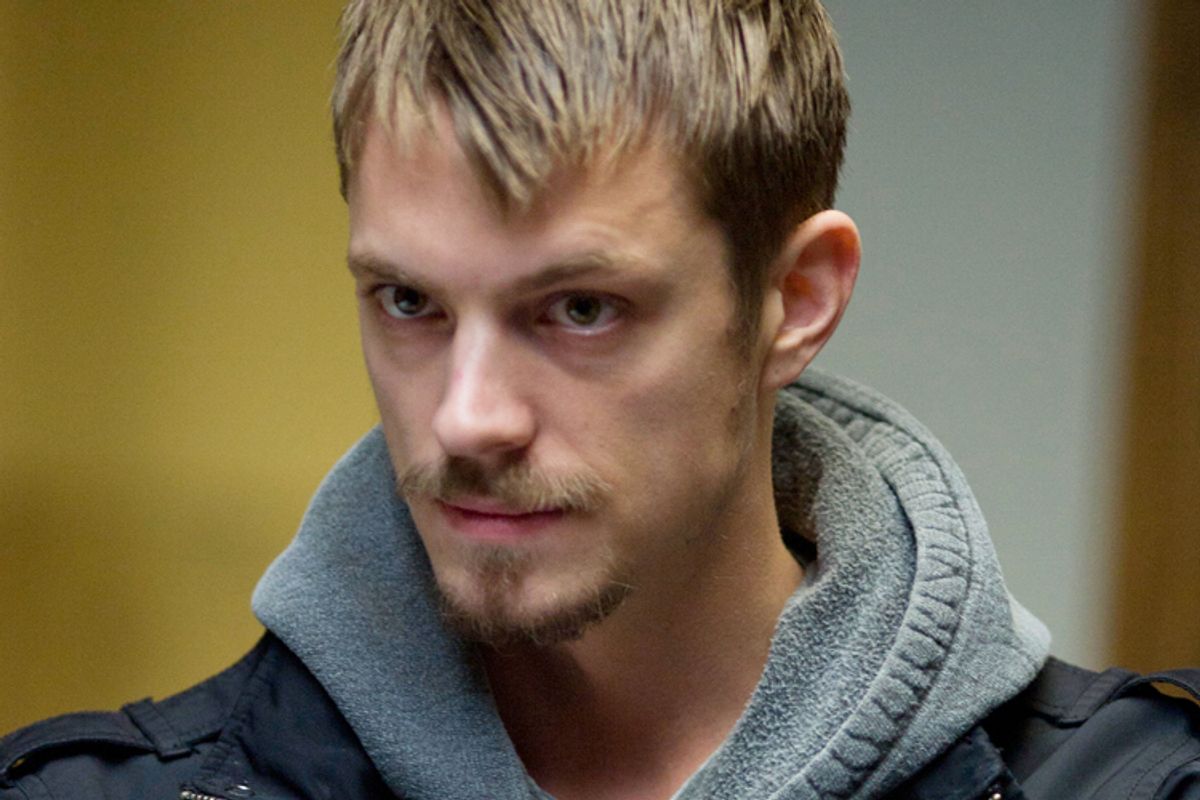 Joel Kinnaman in "The Killing"
--

In a gripping show about grief, murder and our utter inability to know anyone else, Joel Kinnaman provides a much-needed shot of sexual energy. His Detective Stephen Holder has a slithery charm -- all shifty eyes and defiant slouch, a far cry from the barrel-chested, middle-aged men in Burlington Coat Factory suits we usually see in the homicide office. (As his partner Sarah Linden, played by the marvelous Mireille Enos, sniffs at him: "You dress like Justin Bieber.")

It's a sign of just how magnetic Kinnaman's performance is -- and how great and unpredictable "The Killing" is -- that for at least two episodes, I actually thought Detective Holder was the perp. Between his temper flares and the sly evasions native to any former undercover narcotics cop, Holder seemed a likely candidate for Man Leading a Double Life. It turns out I was right on that last count-- recently, we discovered Holder is in the shaky first year of recovery from meth addiction. As his character evolves into someone more complicated and vulnerable, I feel comfortable nixing him from the suspects list. But there's a reason I keyed in to him so powerfully: He may not be the show's killer -- but he is likely its breakout star.

Kinnaman is already a celebrity in his native Sweden, where he played the lead in the dazzling drug-runner drama "Snabba Cash," being remade in America as "Easy Money" (starring Zac Efron in his role). He will soon become familiar to American cinemagoers as well: He has roles in the upcoming Denzel Washington-Ryan Reynolds thriller "Safe House," the Emile Hirsch alien invasion movie, "The Darkest Hour," and the David Fincher-directed version of "The Girl With the Dragon Tattoo." Our brief, 12-minute phone interview was sadly too short to delve into any of that, or his fascinating family life -- he is the son of an American man who defected to Sweden while fighting in the Vietnam War, and he has five sisters from different mothers. Instead, we spoke about "The Killing," his years of teenage hooliganism and what he learned going sober for a month to play Holder.

I've been very curious to hear your real speaking voice. I watched one interview with you, and you had a Swedish accent. And then I watched another interview, and you had an American accent.

[laughs] I'm a bit like a chameleon with my accent. I get caught up in that, like when I talk to people who are interviewing me with a Swedish accent I fall into a weird Swedish accent. I did a lot of traveling when I was younger. I went to places where I was speaking a different language than they were, and I tend to simplify my language in those situations. But the way I'm speaking now, this is my actual accent.

Well, we have different vocabularies. The way he talks he leans my accent in a different direction.

It's kind of fun to see how different critics describe your character: "macho doofus," "skeevy." One reviewer wrote, "you can smell the cannabis rising from his hoodie." What did you want to convey about this character by dressing and moving like he does?

He's a blue-collar kid who's grown up in a rough neighborhood that's diverse and he's known a lot of different people. He never had a father around. Never had a mother. Raised by his sister, who's not that many years older than him, pretty much raised himself, grew up on the streets. I imagine that a lot of his friends became criminals, and he was pretty much saved by the choice he made to go into the academy. And then when he got into the academy, those qualities that would be a weakness -- that way of talking or relating that defines him as blue-collar kid -- becomes his biggest asset as a cop undercover. That's kind of how I think of Holder. His biggest strength is his biggest weakness.

There have been so many detective shows over the years. I would think one of the challenges is to be enough like a cop that you seem authentic but different enough that it doesn't seem like a cliché. What were some of the original qualities you wanted to bring to Holder?

Well, his uncop-like demeanor was written into the script. My challenge was to find the suit that fit that frame. He doesn't think too much before he speaks. He tells it like it is. He's a good character to play.

On Sunday we learned that your character is six months in recovery for a drug addiction. How does that change the way you play him? What are some of the things you add to the portrayal?

That was part of my portrayal from day one. The audience finds out now. When I was preparing to play that part, that was totally key and central. I went to NA meetings. I went sober myself for a month.

It was difficult. It was uncomfortable, going to nightclubs and not drinking. If you're used to drinking, which I am on a social level, it’s demanding. It took a lot out of me not to drink for a month. It made me respect people who have done that for years and years.

Are there certain "tells" you left along the way about this -- for instance, if we were to watch it again, what would jump out as, "oh, right, yeah, he's six months sober."

I have a bunch of old tweaks, but a lot of that is cut out, because they really didn't want any tells at all. So how I played it is a little bit departed from what you see on the screen. When you go back, then I think you'll see it -- this is a guy who's a meth addict.

Are you familiar with the Tumblr "Fuck Yeah Joel Kinnaman"?

Well, it's just a fan site. It has some translated magazine covers from Sweden on there. One of the headlines was, "From teenage hooligan to Hollywood star." Were you a teenage hooligan?

Well, yeah, I was having some troubles in my teens. Coming of age was -- there weren't a lot of gangs in the sense we think of today, but there were football gangs where you'd feel that community and I had spent some time with the football gangs. I was fighting a little bit.

And apparently you spent a year in Texas. Where were you?

Outside Austin, in this town called Del Valle [a tiny town in Central Texas known for having about 300 residents].

You're kidding. What an odd place to live.

Do you know it? Yeah, it was different. And 45 percent of the students were in gangs. It was a bit of a bummer for my parents, because they sent me there since I was getting into trouble in Sweden. They wanted to get me out of the south side of Stockholm. I was an exchange student and then, yeah, I ended up in Del Valle.

And how did you become an actor?

I have five sisters. My oldest sister is an actress. She introduced it as a profession. I would watch her plays. When I was 21, I traveled and worked for a year, and I had a friend who was an actor. I applied to the National Theater School. I got in immediately, which apparently was a bit unusual. I got a part in a movie. As soon as I started working the scenes, I got really addicted really fast. I focused all my energy on it. I didn't give myself a backup plan. It was like, shit I actually am good at this. And that was the inspiration.