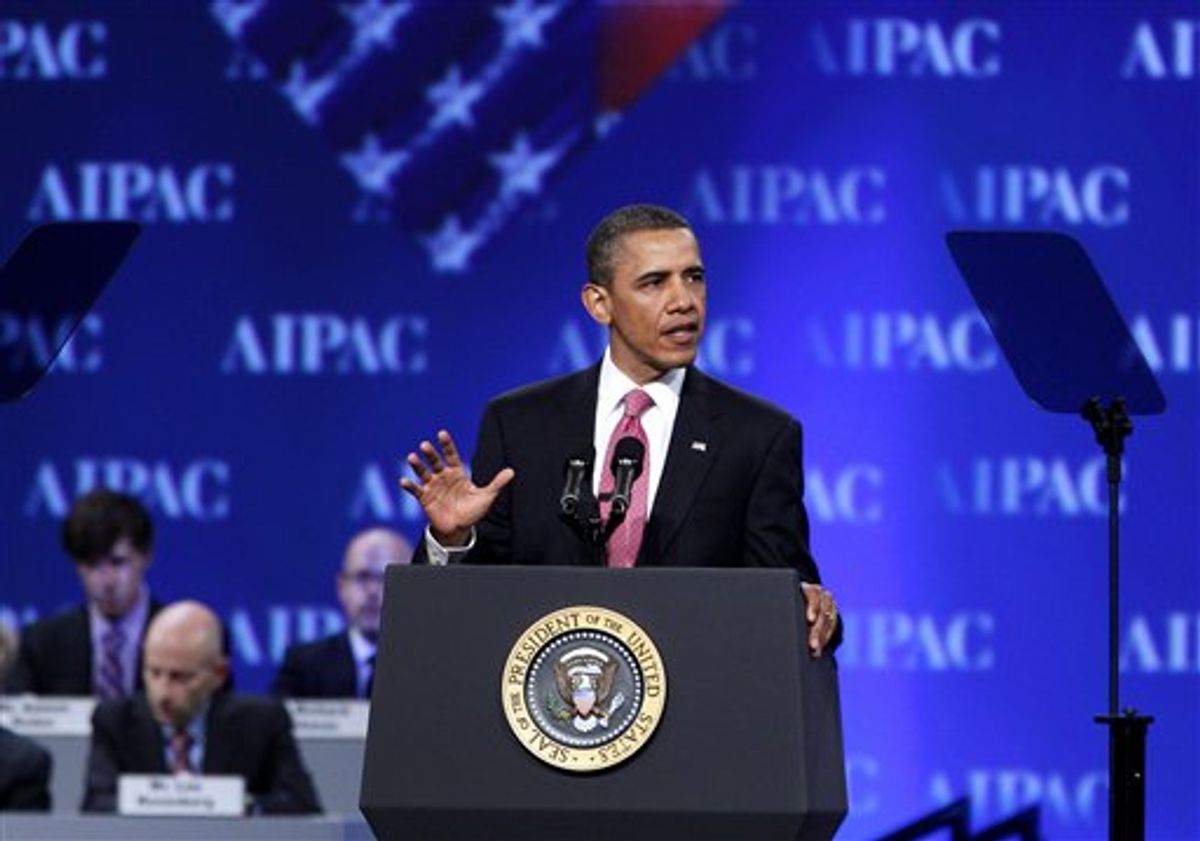 The president told America's pro-Israel lobby that "we cannot afford to wait another decade, or another two decades, or another three decades, to achieve peace."

After a contentious couple of days, Obama said Sunday his endorsement of the Jewish state's 1967 boundaries as the basis for a Palestinian state reflected the urgent need for a two-state solution between Israelis and Palestinians.

He says his call for a future Palestine based on the 1967 borders with agreed land swaps was a public expression of what has long been acknowledged privately.

Obama said he brought the terms out in the open because delay will undermine Israel's security and peace prospects. He repeated his remarks from Thursday on Israeli-Palestinian borders and security verbatim.

President Barack Obama is trying to assuage some of America's fiercest supporters of Israel after he endorsed the Jewish nation's 1967 boundaries as the basis for a Palestinian state and clashed with Israeli Prime Minister Benjamin Netanyahu.

In a speech Sunday to the American Israel Public Affairs Committee, Obama wasn't expected to outline another significant U.S. policy shift but probably would focus on the deep U.S.-Israeli alliance.

But almost everyone in the room wanted to see how the president addresses his remarks from Thursday, when he said that a future Palestine should be shaped around the border lines that existed before Israel captured the West Bank, Gaza Strip and East Jerusalem, with land swaps to account for Israeli settlements and other changed conditions.

Obama's endorsement moved the U.S. position from noting the Palestinian goal for a country based on these terms and leaving the outcome to be settled through negotiation. By removing the nuance, he essentially stated what almost every observer assumed would have to be the border lines of a two-state solution, with mutually agreed adjustments.

Still, the change prompted bitter criticism from Netanyahu. And in a blunt display of differences, the two leaders openly disagreed after a Friday meeting at the White House. Netanyahu called the 1967 demarcation "indefensible" and issued a flat rejection of the idea.

Netanyahu, who will address the pro-Israel lobby Monday and Congress Tuesday, played down the rift.

"The disagreements have been blown way out of proportion," he told The Associated Press on Saturday. "It's true we have some differences of opinion, but these are among friends."

Netanyahu said there should be no doubt about the strength of the American-Israeli relationship and Obama's commitment to Israel and its security.

Obama was to depart later Sunday for a weeklong European tour aimed at tending to old friends in the Western alliance and securing their help with the political upheaval across the Arab world and the decade-long conflict in Afghanistan.

The trip comes amid the continued NATO-led bombing campaign in Libya and a seemingly intractable conflict between Moammar Gadhafi's forces and Libyan rebels. Talks will also encompass economic concerns, as European countries make stark cuts in public spending and Obama and congressional Republicans try to hash out how to cut spending to bring U.S. debt under control.