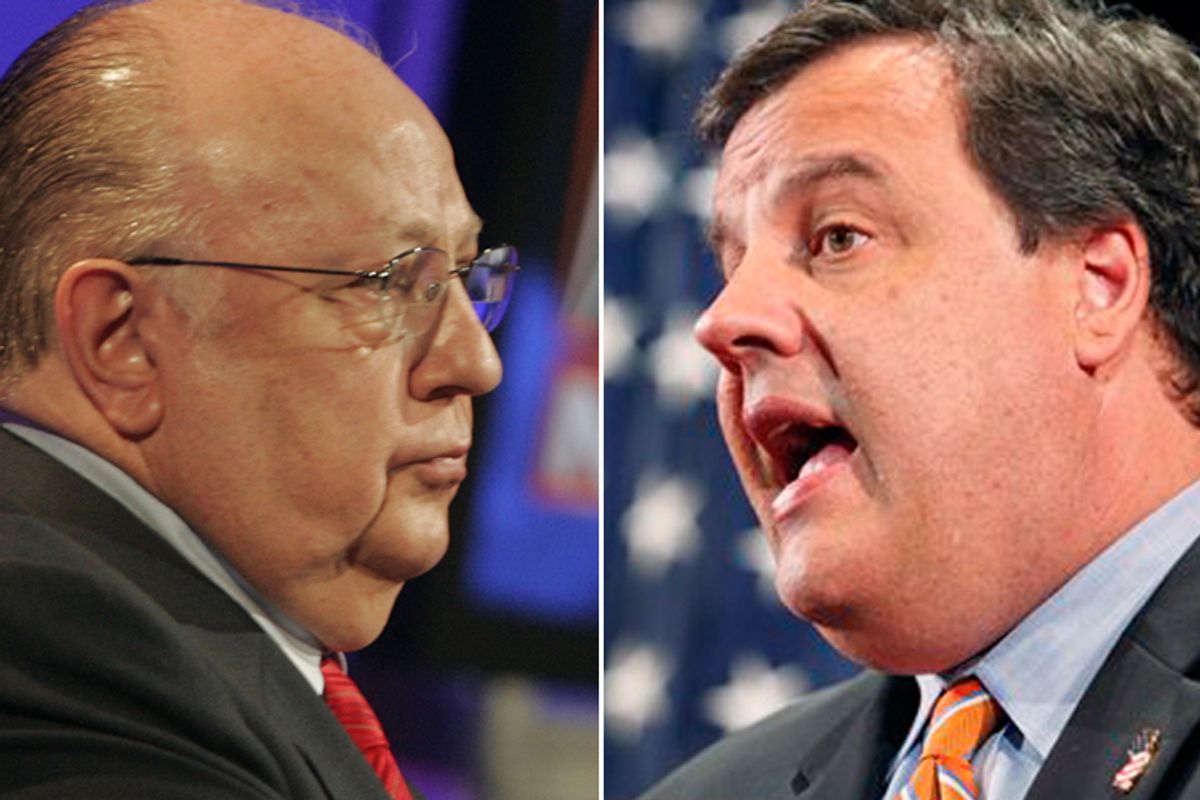 Fox News chief Roger Ailes created his own parallel media world and then locked himself in it, which appears to have made him go mad, if every single recent profile of the man is any indication. As a former Nixon aide, I assume he's always been driven primarily by paranoia and resentment, but he now literally believes that the president is creating a secret police force because he proposed expanding the Peace Corps, according to Gabriel Sherman's Ailes profile in this week's New York.

Oh, Ailes is also unhappy about the fact that no one wants to vote for any of the various clowns he hired to be pundits. He keeps begging New Jersey governor Chris Christie to run for president, but Chris Christie is too busy being surprisingly unpopular at home. And according to one unnamed person, Ailes thinks Sarah Palin is an idiot.

The big story is that Ailes is having Fox "pivot" back to being semi-reasonable after a few years of being completely insane. Those were profitable and entertaining years for everyone, but whipping up hysterical opposition to Barack Obama is more of a "midterm" strategy than a presidential election strategy, and for Ailes, the head of a cable news channel, electing a Republican president is the primary goal. (Haha can you imagine a story about the head of MSNBC repeatedly, personally begging Democrats to run for president against Bush back in 2004 or something? There would be such a massive freak-out, probably ending in mass firings and a public stoning.)

So Ailes wishes for sensible "moderates" like George H. W. Bush to control the Republican party, which is why he keeps asking Chris Christie to run, but he is also more responsible than anyone besides maybe Karl Rove for the current insane state of the conservative movement. He probably doesn't see it this way, but as I said he's basically gone mad.

Here is the fun stuff in this long story: Bill O'Reilly, who is these days playing the part of "reasonable, moderate Bill O'Reilly," hates Sean Hannity and befriended Glenn Beck in order to piss Hannity off.

This, about the trouble Fox had at 5 p.m. before Glenn Beck showed up, is my favorite part of the whole story:

Ailes had unsuccessfully cycled through a slew of anchors, from John Gibson to Laura ­Ingraham. Ingraham’s turn was especially rocky. She would scream so loudly at her staff off-camera that producers in the newsroom would turn on the monitors for fun and watch the unfolding drama.

Laura Ingraham: Just as terrible as you think.