In his final memo to IMF colleagues, DSK denies allegations of sexual abuse -- and insists he will be "exonerated" 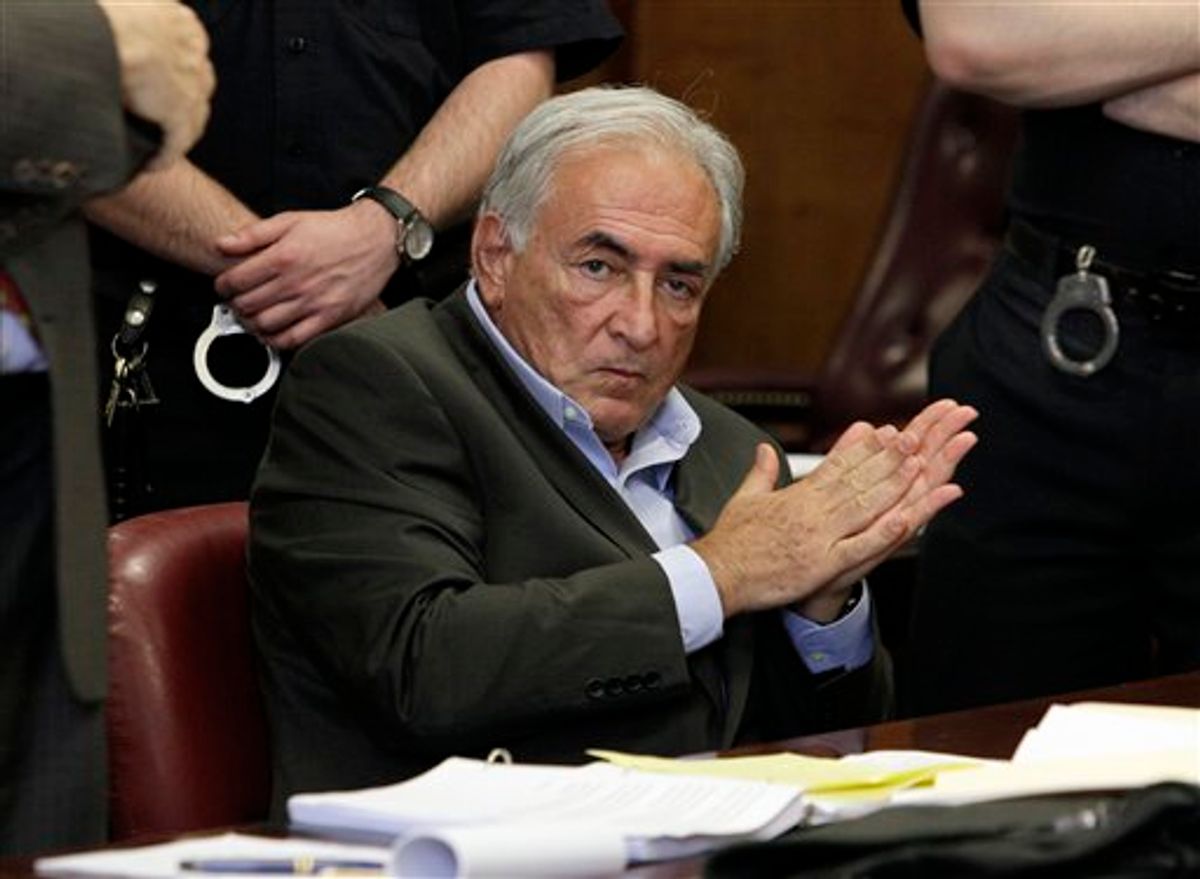 Former International Monetary Fund leader Dominique Strauss-Kahn listens to proceedings in his case in New York state Supreme Court, Thursday, May 19, 2011. A judge set bail at $1 million Thursday, and approved an elaborate arrangement under which the 62-year-old diplomat and banker would be confined to a private apartment in Manhattan and monitored by armed guards. (AP Photo/Richard Drew) (AP)
--

Last Wednesday, the IMF released Dominique Strauss-Kahn's formal letter of resignation. (The next day, DSK was granted bail by a New York judge; he is now staying in a Manhattan apartment at his wife's expense.) In that public letter, the former IMF director firmly denied the sexual abuse allegations that have been brought against him:

To all, I want to say that I deny with the greatest possible firmness all of the allegations that have been made against me. ... I want to devote all my strength, all my time, and all my energy to proving my innocence.

This morning, CNN published DSK's personal good-bye memo to his IMF colleagues. In this note -- quite separate from his public resignation letter, which he calls "one of the most difficult communications of my life" -- he again protests his innocence, writing:

I deny in the strongest possible terms the allegations which I now face; I am confident that the truth will come out and I will be exonerated. In the meantime, I cannot accept that the Fund -- and you dear colleagues -- should in any way have to share my own personal nightmare. So, I had to go.

Unsurprisingly, the body of the letter emphasizes not his recent personal catastrophe, but rather the accomplishments of the Fund under his leadership:

I don’t want to leave without remembering with you some key milestones. The early case for fiscal stimulus. The support, analytical and otherwise, for the crisis response by the G20 and the world. The introduction of sensible flexibility in lending tools (FCLs, etc). The large deployment of resources—both securing them, and using them, including in Western Europe for the first time in decades. New tools for identifying crisis risks, like the early warning exercise. Stronger engagement with the emerging market countries, especially in Asia, and with the low-income countries, especially in Africa, including with the new zero interest rate loans. The downsizing of the Fund—difficult as it was—and putting the Fund’s finances on a sound basis with the new income model. And the historic governance reforms, which have strengthened the sense of ownership across the entire global membership.

He ends on a personal, even emotional note:

I do not doubt, not for one instant, that what the institution has achieved in the last three and a half years is the fruit of your thinking, your work, your conviction. ... I feel privileged and humbled to have worked with such an extraordinary group of people. I will cherish our time together.

Read the full text of the letter here.