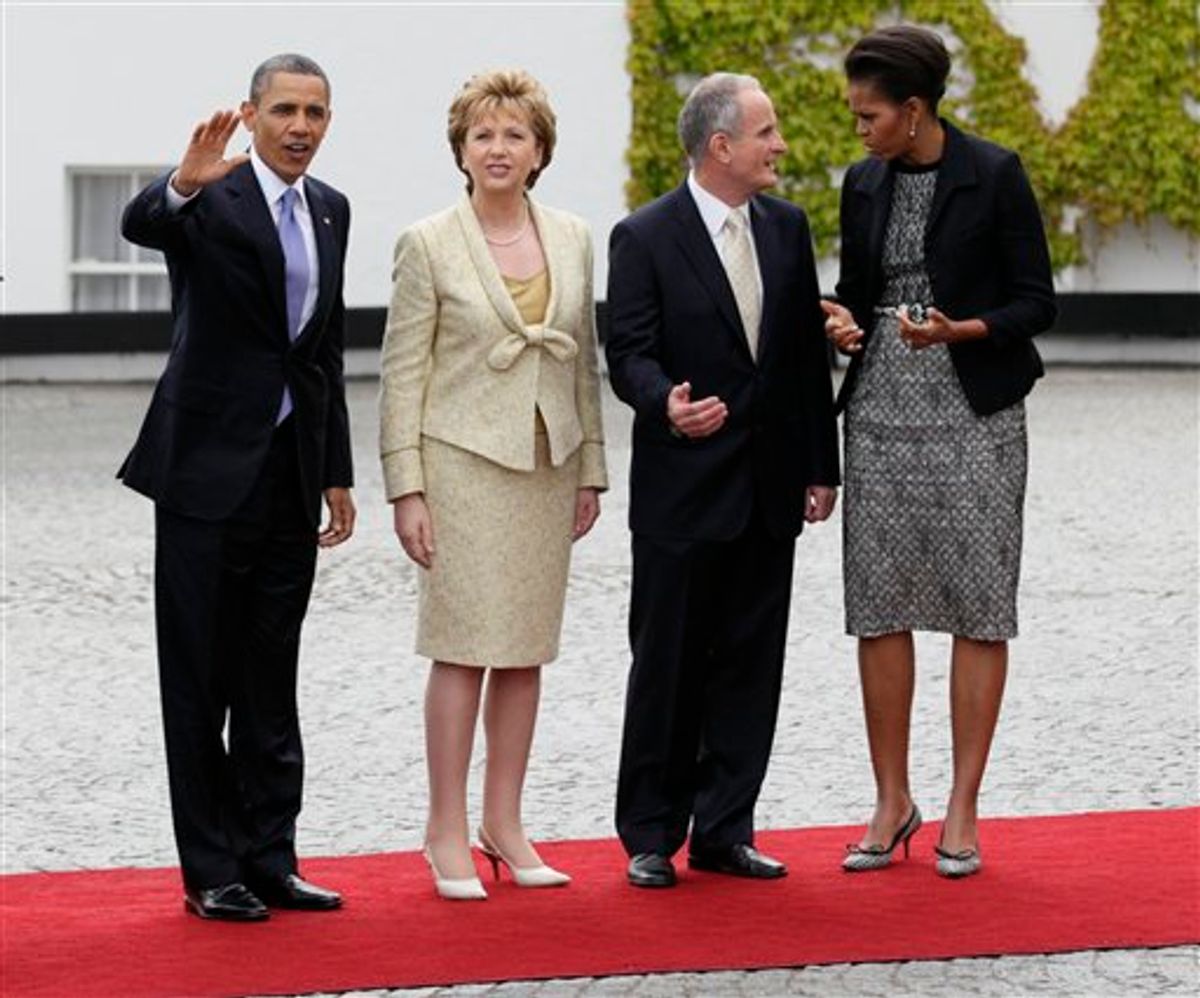 From left, President Barack Obama, President of Ireland Mary McAleese and her husband Martin McAleese, and first lady Michelle Obama stop to be photographed as President Barack Obama arrives at the Presidential Residence in Dublin, Ireland, Monday, May 23, 2011. President Barack Obama opens a six-day European tour with a quick dash through Ireland, where he will celebrate his own Irish roots and look to give a boost to a nation grappling with the fallout from its financial collapse.(AP Photo/Carolyn Kaster) (AP)
--

President Barack Obama said Monday that the U.S. and Ireland share a "blood link" that extends beyond strategic interests or foreign policy into the hearts of the millions of Irish Americans who still see a homeland here.

And though Obama didn't mention it in brief comments alongside the Irish prime minister shortly after arriving in Dublin, that blood link extends to the president himself. Obama was to set out later in the day for Moneygall, the tiny village in County Offaly that is the improbable ancestral homeland of Obama's great-great-great grandfather on his Kansas-born mother's side.

"This continues to symbolize the homeland and the extraordinary traditions of an extraordinary people," Obama said after meeting with Irish Prime Minister Enda Kenny on the first stop of a six-day, four-country Europe tour.

The president, who has struggled very publicly in recent days with his own role trying to broker peace between Israel and the Palestinians, also said during his visit with Kenny "how inspired we have been by the progress that's been made in Northern Ireland. It speaks to the possibilities of peace, and people in longstanding struggles being able to reimagine their relationships."

Obama spoke of the queen's recent visit of reconciliation and said it "sends a signal not just in England, not just here in Ireland, but around the world. It sends what Bobby Kennedy once called a 'ripple of hope' that may manifest itself in a whole range of ways."

Kenny said the Irish people had been awaiting the president's visit and his pilgrimage to Moneygall. "Their excitement is palpable," he said.

As the story goes, Falmouth Kearney, a shoemaker, left Moneygall for the United States in 1850 at the height of Ireland's Great Famine. Obama's roots in the town were discovered during the 2008 presidential campaign.

Residents in the village of about 350 some 80 miles southwest of Dublin have been eagerly anticipating Obama's arrival, applying fresh coats of paint to their homes, patching up the sidewalks and hurriedly building a coffee shop called -- what else? -- Obama Cafe.

White House aides say the president shares their excitement and may even raise a pint at a local pub and connect with a few distant relatives.

First, though, after traveling overnight from Washington aboard Air Force One, the president and first lady Michelle Obama met Ireland's President Mary McAleese at her official residence, and Obama participated in a tree planting ceremony. He tossed shovels of dirt at the base of a young oak as children rang a peace bell marking the 10th anniversary of the Good Friday accord, the historic agreement that put Northern Ireland on the road to peace. Nearby stood trees planted in past visits by then-presidents Bill Clinton and John F. Kennedy, and one planted just last week by the queen of England during her visit here.

Obama then headed into his meeting with Kenny, and he was to visit with U.S. embassy staff before his travel to Moneygall, where excited residents waited to cheer their connection to the U.S. president.

"It's certainly quite likely that in a town of that size that is so deeply rooted in that part of Ireland that there are people who share those ties," said Ben Rhodes, Obama's deputy national security adviser for strategic communications.

Obama was to wrap up his trip here with an open-air speech at College Green, the same spot in the center of Dublin where President Bill Clinton drew a massive crowd for a speech during his 1995 trip to Ireland.

Obama's remarks will be part of a larger rally that includes musical performances and appearances by popular Irish actors and athletes. In keeping with the festive mood, Obama aides said the president's speech would not be political, instead focusing on the deep ties that bind the U.S. and Ireland.

"It's also a chance to talk about the enormous affinity, frankly, that the American people have for Ireland that's rooted in part in the huge population of Irish-Americans here," Rhodes told reporters before the president left Washington.

Obama arrived just days after Britain's Queen Elizabeth II visited the Emerald Isle, the first trip to Ireland by a British monarch in about 100 years.

The back-to-back visits have given the Irish a much-needed reason to celebrate as they struggle to climb out of the financial hole created by the collapse of the country's banks and housing market.

Gripped by debt, Ireland was forced to take a bailout from the European Union and International Monetary Fund in November that could total $100 billion. The rescue package came with stringent conditions that will lead the Irish to slash 25,000 jobs from the state payroll, leaving many in this country of 4.5 million with deep uncertainty about their financial future.

Heather Conley, a Europe expert at the Center for Strategic and International Studies, said she hopes Obama's visit includes "a moment of reflection to see the personal impact and toll" the economic crisis has levied on Ireland and other countries in the region.

After spending the night in Dublin, Obama heads to London for a two-day state visit at the invitation of the queen. He'll then travel to Deauville, France, to meet with the heads of leading industrial nations, before ending his Europe trip with a visit to Poland, a strategically important Central European ally.

An overarching theme of Obama's trip -- his eighth to Europe since taking office -- will be to reassure the region that it still has a central role in U.S. foreign policy, even though Obama has put a premium on boosting U.S. relations with Asia and emerging markets elsewhere in the world.

The president is expected to emphasize the need for the U.S. and Europe to be in lockstep against the backdrop of sweeping unrest in the Middle East and North Africa, not only in the NATO-led bombing campaign in Libya, but also as financial backers for countries in the region, like Tunisia and Egypt, that are pressing forward with democratic transitions.