Will Lance Armstrong wind up behind bars?

The former cycling champion's legacy is in jeopardy. But don't expect to see him locked up just yet 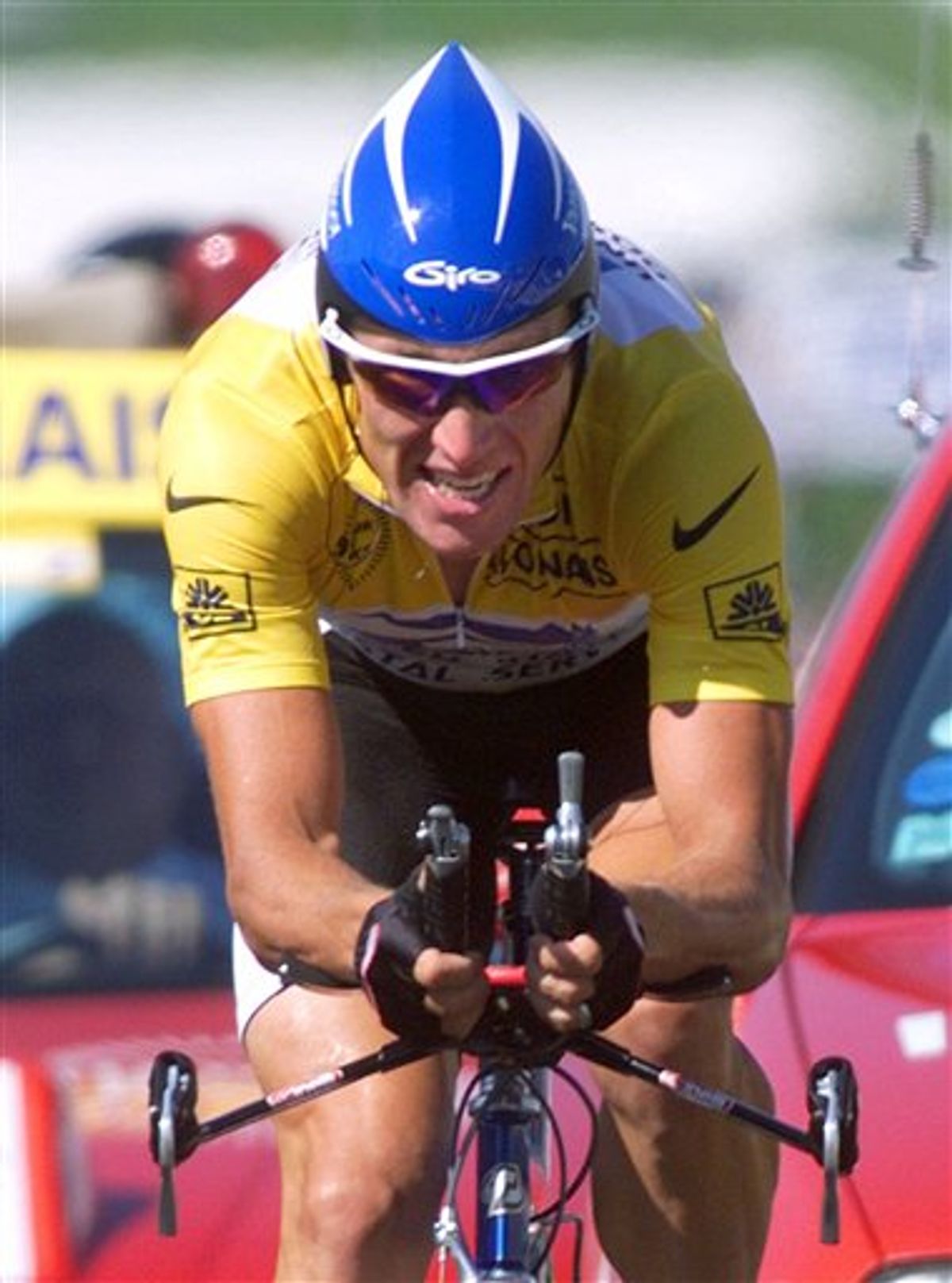 FILE - In this July 24, 1999 file photo, overall leader Lance Armstrong of the U.S. strains on his way to winning the 19th stage of the Tour de France cycling race, a 57-kilometer individual time trial around the Futuroscope theme park near Poitiers, western France. Tyler Hamilton, a former teammate of Armstrong, has told CBS News that he used performance-enhancing drugs with the seven-time Tour de France winner to cheat in cycling races, including the tour. Armstrong has steadfastly denied doping and has never failed a drug test. (AP Photo/Laurent Rebours, File) (AP)
--

Though critics have been sounding the alarm for years, an incendiary "60 Minutes" report last night could come to mark a definitive turning point in the public's perception of the cycling great. Tyler Hamilton, a former teammate, told CBS' Scott Pelley that he took performance-enhancing drugs with Lance Armstrong over the course of three seasons, starting in 1999. The interview corroborates claims made by another disgraced cyclist, Floyd Landis, who last year accused Armstrong of violating the sport's policy against PEDs.

The allegations were many, and painted a picture of institutionalized doping among members of Armstrong's U.S. Postal team. But what might have been most interesting about Hamilton's interview, from a legal point of view, was his claim that he shared the same information with a federal grand jury that was impaneled last year to investigate Armstrong. According to CBS, three former teammates have now told federal investigators that they saw Armstrong using banned substances during his period of Tour de France dominance. And, as the prosecution builds a case, it's only natural to wonder when the other shoe might drop. Could Lance Armstrong really go to jail?

There's certainly a precedent. Many will remember disgraced track-and-field star Marion Jones, who spent six months in federal prison after she lied under oath about steroid use. Home-run king Barry Bonds, likewise, was convicted last month on an obstruction-of-justice charge connected to his own steroid scandal. The case against Armstrong may be even more serious.

Information from the grand jury proceedings is sealed, meaning there are few hard answers right now about the investigation. But we do have some idea what he might be up against. According to Business Insider's Henry Blodget:

The government appears to be building a case that Lance Armstrong and other team-members defrauded the U.S. government by saying they were clean when they weren't in order to get sponsorship money from the U.S. Postal Service.

Indeed, if investigators find that Armstrong and his teammates lied about his use of banned substances in order to procure sponsorship money from the U.S. Postal Service -- a federal agency -- he could face charges of "fraud against the US Government, racketeering, conspiracy to defraud the government and a number of other charges."

According to Daniel Richman, professor at Columbia University and federal criminal law expert, a few different factors will determine what actions federal investigators take against Armstrong. One, whether or not doping actually occurred, seems less and less in doubt with each subpoenaed teammate who comes out against Armstrong. Another factor relates to the details of the U.S. Postal agreement: If it turns out that Armstrong lied about drug use in order to help secure sponsorship money, then a fraud case might proceed. (Richman also points out that Armstrong could face similar charges if he lied to any other sponsors, federal or no.)

Still, Richman declined to guess what specific charges Armstrong might confront -- or what kind of sentencing he might face, if convicted -- noting that "anyone reputable would try to avoid opinion on fraud sentencing" in this day and age.

"We really don't know what we have here," Richman said. "The fact that there is a very intense [investigation] pursuing this matter ... and the fact that many people around Armstrong are feeling free to share their recollections or views with the public, really may raise the pressure on prosecutors to go forward. But that doesn't at all mean that there's an underlying crime here."