In an AIPAC speech Sunday, the president clarified his statement on the 1967 borders 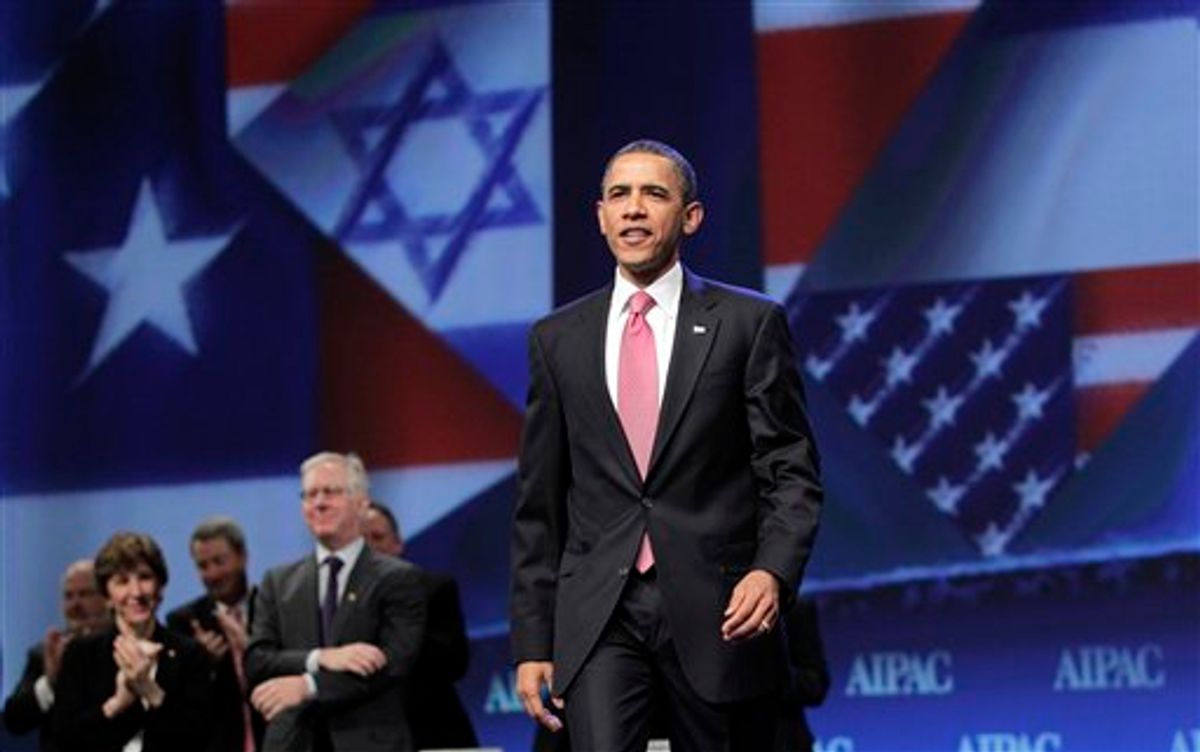 President Barack Obama arrives to speak at the American Israel Public Affairs Committee (AIPAC) convention in Washington, Sunday, May 22, 2011. After a contentious couple of days this week when he clashed publicly with Israeli Prime Minister Benjamin Netanyahu over ideas for a permanent Palestinian state, Obama is focusing on the deep U.S.-Israeli friendship and alliance. (AP Photo/J. Scott Applewhite) (AP)
--

These were the words the Israeli government and its supporters on American soil -- who expressed outrage after Obama used a State Department speech last week to call for the '67 borders to serve as the starting point for negotiations between Israel and the Palestinians -- wanted to hear. According to the Israeli newspaper Haaretz, Obama satisfied Israeli Prime Minister Binyamin Netanyahu's ruling Likud party. Likud member Carmel Shama-Hacohen commented:

President Obama gave an explicit, emphatic 'no' to the '67 lines and Hamas [while expressing] boundless support for the State of Israel as a Jewish and a democratic state whose security is ensured.

Indeed, Obama's Sunday speech clarified that -- contrary to what hysterical reactions to his Thursday address -- he had never demanded that Israel and Palestine revert to pre-1967 borders, but rather called for a peace deal "based on the 1967 lines with mutually agreed swaps." He emphasized:

Let me reaffirm what 1967 lines with mutually agreed swaps means. By definition, it means that the parties themselves - Israelis and Palestinians - will negotiate a border that is different than the one that existed on June 4, 1967. That is what mutually agreed-upon swaps means

The president's clarifications on Sunday allayed many unfounded fears among the pro-Israel lobby. AIPAC's official statement in reaction to Obama's address stated:

We appreciate [Obama's] statement that the U.S. does not expect Israel to withdraw to the boundaries that existed between Israel and Jordan in 1967 before the Six Day War.

And Josh Block, a former AIPAC spokesman who is a senior fellow at the Progressive Policy Institute, told the Washington Post:

By adding a whole section to the speech that was missing on Thursday, President Obama put himself in line with presidents since Lyndon Johnson who have said again and again, Israel cannot go back to the 1949/1967 lines.

However, according to the Post's Jennifer Rubin (reporting on the AIPAC reaction in a manner true to her ultra-conservative form), Obama's speech dismayed a number of AIPAC members in the audience. She noted:

In interviews with about two dozen attendees of all ages, some observant Jews and some not, the reaction was evenly divided between those unimpressed if not dismayed (on the prospects of Obama’s reelection a middle aged man from Michigan said, “I don’t want to look into that abyss”) and those willing to believe Obama cleared everything up.

According to Haaretz, the Arab League will convene in the coming days to issue an official response to Obama's remarks. Meanwhile, Palestinian reactions have been unsurprisingly mixed. President Mahmoud Abbas defended his Fatah faction's recent unity deal with Hamas. Obama called the unity agreement an "enormous obstacle to peace." According to Ynet News, Abbas has responded, saying:

Hamas is part of Palestinian society, and will take part in the democratic game as opposition.

The Israeli Prime Minister will address Congress Tuesday and it will be interesting to compare reactions to this -- particularly from members of the GOP, who tried, but ultimately could not succeed in casting Obama in an anti-Israel position.