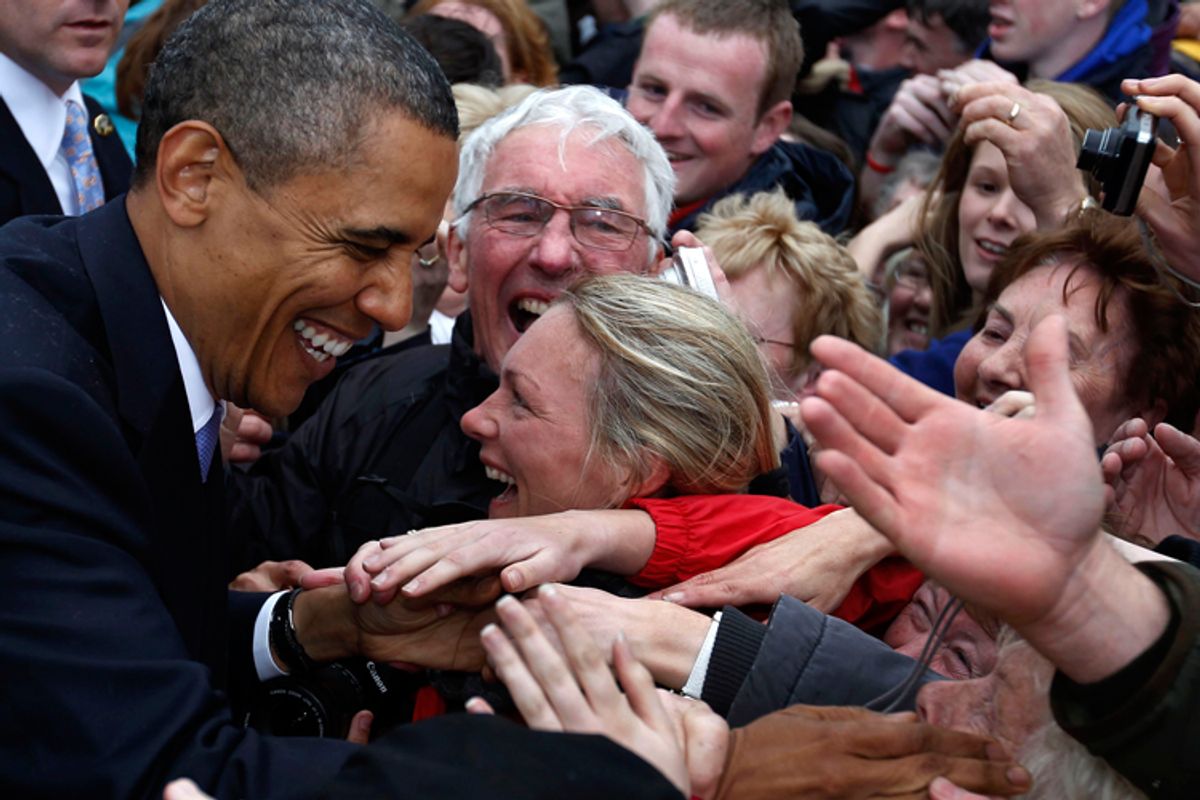 President Obama smiles as he shakes hands with a crowd of local residents in Moneygall.
--

The cynical may dismiss it as just another campaign stop, but I found myself unexpectedly moved by President Obama's visit to Dublin -- the overwhelming adulation from the Irish as well as the president's warm speech, claiming his own Irish heritage and praising the bonds between the two countries.

He introduced himself as "Barack Obama of the Moneygall Obamas, and I've come home to find the apostrophe we lost somewhere along the way." He joked about wishing he'd known of his Irish ancestry as a young politician in Irish Chicago, where he wound up bringing up the rear at the annual St. Patrick's Day parade, just in front of the garbage brigade. He praised the role of Irish American soldiers in the Revolutionary and Civil Wars. And he spoke personally, and movingly, about his grandfather's grandfather Falmouth Kearny, who left tiny Moneygall during "The Great Hunger" -- the more common Irish term for the Famine of 1847-48 -- not only praising his courage but acknowledging how "heartbreaking" it must have been to leave Ireland. For the Irish who, generations later, still see themselves as exiles, it was a knowing nod to the only partly voluntary nature of their emigration.

I can't find studies breaking out the Irish vote in 2008, but Obama was perceived as struggling to win the support of Irish during that election. They were said to favor Hillary Clinton, and I remember Obama spending St. Patrick's Day 2008 in Scranton, Penn., where the Irish crowd made it clear it backed Clinton, and Obama struggled gamely to win them over. It wasn't long after his unfortunate comment about working-class Pennsylvania voters clinging to their guns and religion, which probably didn't go over big in working-class Irish Catholic precincts of Pennsylvania.

Just a couple of months ago, I was saddened by the reaction of Irish-Americans who learned from Ancestry.com that they were related to Obama, just in time for St. Patrick's Day this year. "I really don't like to claim a relationship to Obama," Roma Joy Palmer, 66, of Mulvane, Kan., told the Associated Press. "He is not my favorite President. I don't have anything against him personally, but I don't think we have the same agenda." Another relative, 83-year-old Dorma Lee Reese of Tucson, expressed similar feelings. "I'm not a Democrat, so I can't say I clapped," she said.

So it was nice to see the president welcomed so warmly by the Irish in Ireland. Obama also referenced the "unlikely friendship" between Ireland's "Great Liberator" Daniel O'Connell, and American abolitionist Frederick Douglass, who was born a slave. It's one of history's great stories: Douglass loved his visits to Ireland, where he wrote that he felt "not like a color, but like a man"; O'Connell, a staunch supporter of the American abolition movement, was honored by New York's African-American Abyssinian Baptist Church in 1833, calling him "the friend of oppressed Africans and their descendants, and the unadulterated rights of man."

But that inspiring friendship had one disappointing dimension that the president didn't mention. When Douglass and other abolitionists tried to use O'Connell's popularity with Irish Americans to win them to the anti-slavery cause -- especially as Irish Catholics seemed to be lining up with the pro-slavery Democratic Party -- they failed. In 1841, 70,000 Irish men and women, including O'Connell, signed an "Address from the People of Ireland to their Countrymen and Countrywomen in America," beseeching Irish Americans to "CLING BY THE ABOLITIONISTS," but the message didn't sell. That failed coalition is central to "whiteness studies" scholarship -- it's a pivot point for Noel Ignatiev's shrill "How the Irish Became White," and it figured prominently, and one-sidedly, in David Roedeger's "The Wages of Whiteness" and Nell Irvin Painter's otherwise astute "A History of White People" – showing how the Irish chose whiteness over justice. It's actually much more interesting, with lessons about black-Irish tensions that persist to this day.

Under violent attack by Nativists, Irish Catholics struggled fiercely for acceptance; they were unlikely to join the abolitionist movement, the radical frontier of the anti-slavery effort. Another problem was, some prominent abolitionists and anti-slavery activists were also virulently Nativist and particularly anti-Irish Catholic. Almost the entire storied Beecher clan preached a fiery Nativism, from Lyman Beecher (father of Uncle Tom's Cabin author Harriett Beecher Stowe), whose days of anti-Catholic sermons and crusading formed the cultural backdrop to the 1834 torching of an Ursuline convent in Charlestown, Mass., through Henry Ward Beecher, who denounced the Irish as "the most admirable race that ever abominated the earth" and the "destroyers" of many nations. Abolitionist martyr Elijah Lovejoy, murdered by an Illinois mob inflamed by his anti-slavery newspaper, crusaded against Catholicism at least as stridently as against slavery. Boston's Theodore Parker, a passionate defender of abolitionist John Brown’s radicalism, despised the Irish just as passionately, referring to them as "an ignorant, idle, turbulent, and vicious population" and as "wild bisons leaping over the fences which easily restrain the civilized domestic cattle," who threatened American democracy. As historian Peter Kolchin notes: "Some abolitionists managed to combine a passionate belief in the goodness and intellectual potential of black people with an equally passionate conviction of the unworthiness of the Irish."

Seeing so many of their enemies among O'Connell's abolitionist friends, Irish Catholics rejected the Liberator's appeal. O'Connell kept crusading, though he acknowledged that "there are amongst the abolitionists many wicked and calumniating enemies of Catholicity and the Irish." He even suggested the need for "an Irish Address in reverse": an "Address to the Abolitionists" that would ask them to "cooperate in the spread of Christian charity with the Irishmen and Catholics in America, and obtain their assistance." Needless to say, no such cooperation ever materialized, and for rejecting O'Connell's appeal to join the abolitionists, the Irish went down in history -- well, at least in whiteness studies tomes -- as backward racists. The fact is, colliding at the bottom of industrializing American society in the mid 1800s, the Irish and African-Americans had different enemies, and different friends. The poorly understood legacy of being pitted against one another persists to this day. It flashed periodically during the 2008 primary; we can only hope we don't see it again in 2012.

That's why it was so nice to see Obama's eloquence about his Irish heritage, and the way his "family" in Ireland embraced him. MSNBC and CNN cut over from covering the awful storms in Joplin, Mo., to present Obama's speech in full; Fox did so only briefly, which was sad because the Fox audience (my Irish relatives among them) might have been moved by Obama's Irish welcome. But Fox did cover the president's visit by pushing an absolutely false story that the U.S. planned to bail out Ireland. Roger Ailes, ever Richard Nixon's media man, wouldn't feature a story that might shake up his aging white audience, or as it's also called, the GOP base.