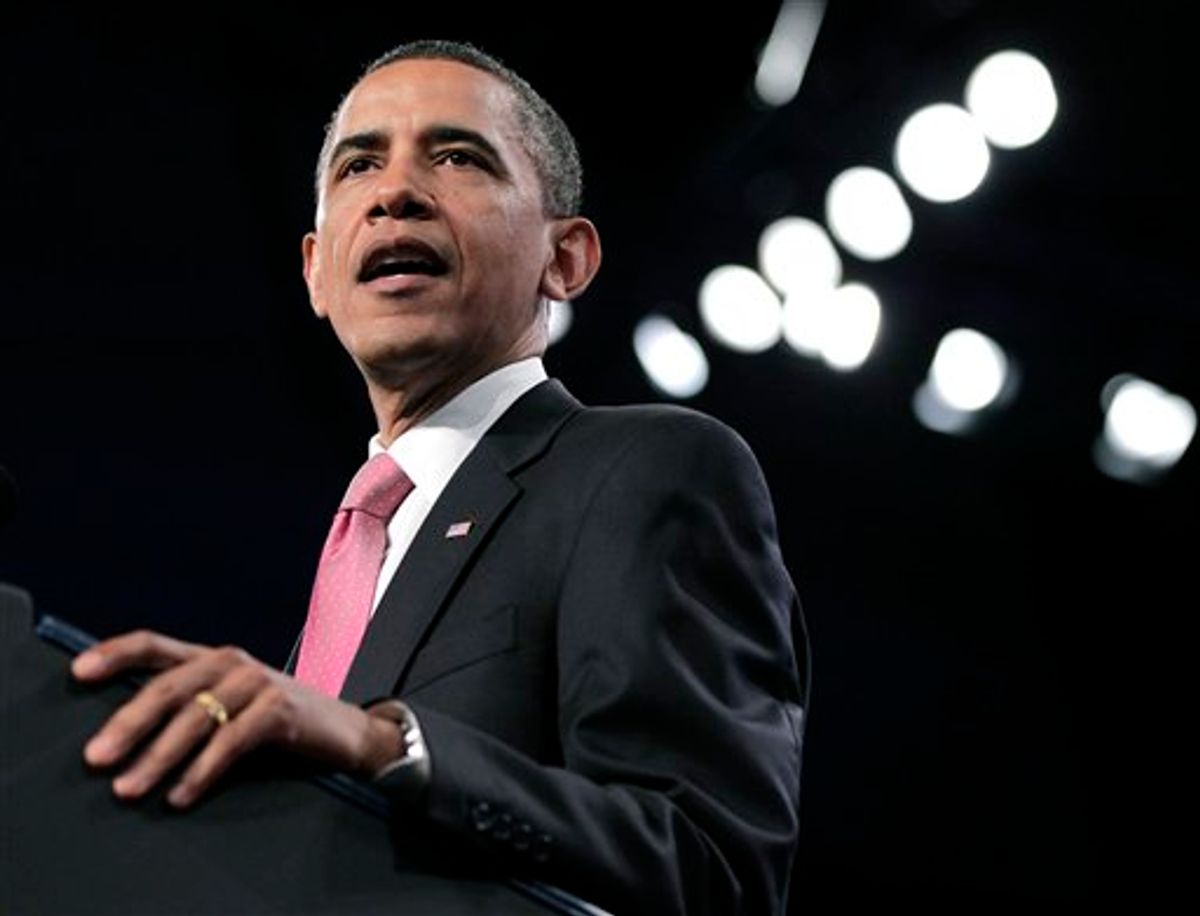 President Barack Obama tells the American Israel Public Affairs Committee (AIPAC) convention that the bonds between the US and Israel are "unbreakable", Washington, Sunday, May 22, 2011. After a contentious couple of days this week when he clashed publicly with Israeli Prime Minister Benjamin Netanyahu over ideas for a permanent Palestinian state, Obama is focusing on the deep U.S.-Israeli friendship and alliance. (AP Photo/J. Scott Applewhite) (AP)
--

And then there were three.

With Sunday's news that Indiana Governor Mitch Daniels will not seek the Republican presidential nomination, the GOP is down to a trio of obviously plausible candidates for president -- for now, anyway.

It is now highly likely that Barack Obama’s 2012 opponent will be Mitt Romney, Tim Pawlenty (who is set to formally declare his candidacy today), or Jon Huntsman. It is also not inconceivable that an unexpected candidate -- Rick Perry or Chris Christie are the most logical prospects -- might yet swoop into the race and nab the nomination. But the prospects are remote, at best, that any of the other candidates actively pursuing the nomination -- Newt Gingrich, Rick Santorum, Herman Cain, Michele Bachmann, Ron Paul, and Gary Johnson -- will emerge victorious.

Why would Daniels, who doesn’t have much of a national reputation, lacks obvious appeal to the party’s activist base, and was barely registering in polls, have belonged in the top tier of candidates? Because he had the potential to emerge as the consensus choice of his party’s opinion-shaping elites -- elected officials, top fund-raisers, interest group chiefs, commentators and other thought leaders who might have ultimately concluded that he represented the best possible mix of ideological acceptability and general election viability. Had he won them over, their direct and indirect support would have fueled his campaign with cash, endorsements, and buzz, trickling down to the rank-and-file and lifting Daniels' polling support.

This wouldn’t have automatically happened, of course, and there’s a chance that as a candidate Daniels would have remained an asterisk and dropped out after humbling showings in Iowa and New Hampshire. But his gubernatorial experience, deep ties to the party’s national establishment, calm and reassuring manner, and reluctance to embrace culture war politics (I know, I know, he says he'll sign that Planned Parenthood bill) were all pluses to elites, who ultimately want to back someone who will win in November and not forget them once he or she is in office. Everything about Daniels suggests that he’d be a perfectly fine general election candidate -- generic and inoffensive enough to defeat Obama if economic anxiety is high and voters are looking to toss Obama out.

The same cannot be said for most of the other candidates now in the GOP mix. Gingrich, Santorum, Cain, Bachmann, Paul and Johnson all flunk the basic viability test. All of them are far too ideological, too polarizing, or too inexperienced (or some combination of the three) to be good November bets. They each, in their own way, evoke Christine O’Donnell, Sharron Angle and Ken Buck, whose profound deficiencies cost Republicans statewide elections they should have won last fall. It is unimaginable that the GOP’s elites will unite behind any of them in 2012. The best case for these candidates seems to a repeat of what Pat Buchanan pulled off in 1996, when he finished a close second in Iowa and then won New Hampshire -- at which point terrified party elites rushed to Bob Dole’s side and helped him win virtually every contest the rest of the way.

Of the remaining candidates, only Romney, Pawlenty and Huntsman pass this basic test, which is why it’s so likely that one of them will end up winning. The scarcity of options for GOP elites is one of the reasons I’ve argued Romney can overcome his "healthcare problem" -- the fact that he signed (and refuses to apologize for) a universal coverage law with an individual mandate when he was governor of Massachusetts. Elites may have their doubts about Romney, but they know he can win (again, provided the general election climate is right) and they know he’ll be a team player. They may not be thrilled with the idea of nominating him, but he’ll do. And that may be good enough -- especially when you consider how little enthusiasm Pawlenty, who has been running aggressively and trying extremely hard to capitalize on Romney’s healthcare problem, has thus far stirred. Pawlenty may end up being the "good enough" candidate too, but right now he is surviving only on potential. Huntsman is a newer entrant and is only now -- with several other potentially serious prospects (Daniels, Mike Huckabee, John Thune, and Haley Barbour) dropping out -- starting to get a real look.

There is also the "white knight" scenario, in which a new, exciting candidate rides to the GOP’s rescue. There were reports last week that Perry, who is in his third full term as Texas’ governor, might suddenly be interested in running. He could potentially be acceptable to elites. So could Christie, one of the strongest communicators in today’s GOP. Perry has shown in Texas that he can raise serious money, while Christie, who parlayed his role as a Bush 2000 "pioneer" fund-raiser into his career-making job as U.S. attorney, is well-connected in the cash rich tri-state area. As I wrote last week, it's entirely possible that both Perry and Christie would fall flat on their faces as candidates -- just like Fred Thompson in 2008 and Wesley Clark in 2004, the two most recent late entrants. But with Daniels’ departure bringing further definition to the GOP field, they are both worth watching in the weeks ahead. (Jeb Bush has also been the subject of white knight speculation, but he apparently ruled it out again on Sunday. Given the baggage of his family name, Bush has always been an extremely unlikely '12 candidate.)

It’s tempting to regard the scarcity of truly viable GOP candidates as good news for Obama, but it really doesn’t say much about his reelection prospects. After all, in Romney, Pawlenty and Huntsman, the GOP has three candidates who would likely do fine as nominees; they would probably do as well -- not better, not worse -- as a generic Republican candidate would. And if the economy is struggling and voters want Obama out, "generic" will be enough for the GOP to win. And if the economy is doing better and voters want to keep Obama, then it really doesn’t matter whom the Republicans nominate – they'll lose. As Brendan Nyhan was quick to point out on Sunday, we've seen a scenario like this before, when numerous big-name Democrats declined to seek their party’s 1992 nomination, leaving a small, late-starting field that was derided for its supposed weakness. That’s the field that produced Bill Clinton.