The hard cut beauty of "Treme" 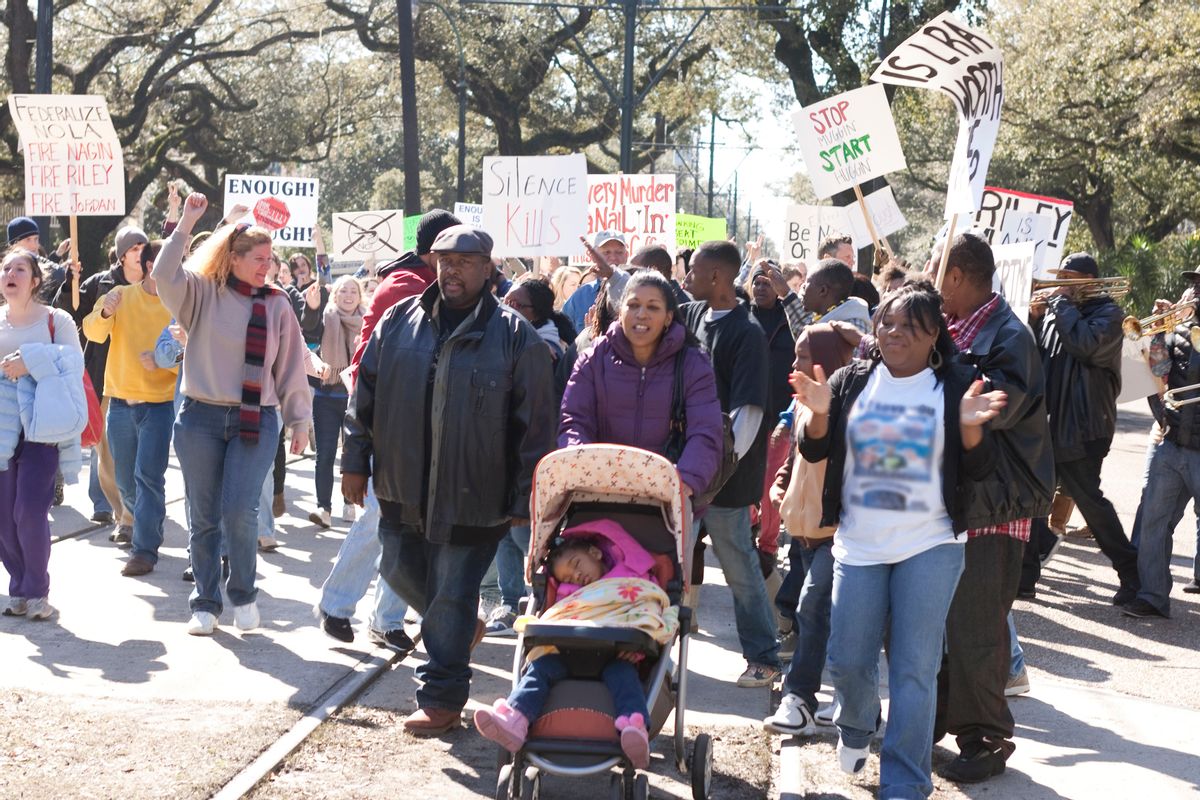 The fifth episode of the second season of "Treme" had no obvious dramatic high points, no shattering moments. As written by Mari Kornhauser and directed by Rob Bailey, it was pretty much a classic mid-season episode of a sprawling ensemble cable drama. But in every way but two (which I'll get to in a minute) it seemed a near-perfect expression of the soul of "Treme."

Titled "Slip Away" (after a number performed by Antoine's new band), the episode began and ended with signature "Treme" setpieces -- public gatherings that evolved into a live musical performances. The first was a memorial service (for Dinerral) that segued into a musical procession, then fell silent as all the musicians stopped playing and held their instruments aloft in salute. The second was a march to "End the Violence" in storm shattered, crime addled New Orleans. It began with a shot of a bicycle -- the possession of a former murder victim, briefly glimpsed earlier scenes, and accumulating flowers and candles. Then it jumped from location to location, showing groups of marchers in different neighborhoods, converging.

Both setpieces shared a  quality that is distinctively "Treme," and distinctly unlike most modern TV shows and movies: a commitment to genuinely documentary-like images and sounds. What you saw and heard in these sequences was what you might have seen and heard if you were there in those spaces.  And when the episode cut from one place to another, there were no attempts to smooth the transitions --  just hard cuts, for both picture and sound.

The effect was very "analog." It reminded me of switching channels on a monaural, pushbutton car radio, or watching a theatrical documentary shot on film. Hard cuts are the simplest way to tell any kind of story with moving pictures. The show's hard cut aesthetic expresses its understated style.

We weren't celebrating or mourning any particular characters who meant a lot to us as viewers. We were just watching people gather and behave. Yet the two sequences had an embracing sensibility, warm and inviting, because they were so direct.  The opening could make a statue misty. The ending evoked a feeling similar to what I imagined that Lt. Colson was experiencing as he watched the demonstrators: an appreciation for the vastness and diversity of a city, and a sense of pride in one's fellow humans for for having sized up a problem and decided to something, anything, rather than sit there in a fog. I especially loved how the episode cut between locations defined by music, and locations defined by chanting voices and marching feet. It gave the viewer a sense of the hugeness of New Orleans, and the literal and figurative distance between characters, more effectively than showier, more overtly "visual" effects (a helicopter shot, a CGI map).

The middle section of the episode wasn't as magnificent. What could be?  But it shared many of the same qualities: precision, simplicity, humility. It reminded me of watching a knocked-down fighter pick himself up off the canvas. Midway through the second season, we're seeing a bit of the post-Katrina numbness wear off. The misery inflicted by the city's crime epidemic seems to have collectively knocked the major characters back to the here and now and forced them to focus, and accept that if they don't at least try to run their own lives, someone else (or something else) will.

Albert's re-filing that plumbing paperwork after railing against the injustice of it all; Janette apologizing for her drink-tossing episode last week, eating several platefuls of humble pie, and starting again from a kitchen's bottom rung; Sofia confronting the basic facts of her father's death, retracing his steps and revisiting the site of his suicide, a ferry boat; Delmond Lambreaux embracing the musical legacy of his hometown; Davis hustling to get a sampler album out, getting an unexpected assist from his Aunt Mimi, and slowly realizing he'll never be a great musician, perhaps not even a good producer; Lt. Colson realizing that his department was botching a murder investigation and deciding to speak up about it, even second guess his colleagues; Annie writing her first song (not bad for an amateur), being informed that it's basically Bob Dylan's "Don't Think Twice, It's Alright," and receiving the news with good humor and undimmed enthusiasm: these subplots and others showed people tapping their greatest potential, their best selves. "It's time to get out of your doggone house and start to make a difference!" Council President Oliver Thomas told a TV news crew, "each one, everyone."  Or as Albert put it -- bitterly, and in a very different context -- "I'm out here on my own, getting shit done!"

That climactic close-up of LaDonna was even more affecting because it wasn't about action, but the buried promise of action. Khandi Alexander played the moment small, almost blank faced. But there was a spark in LaDonna's eyes as she watched TV coverage of the march, as if she recognized that the marchers were speaking for her, too.

I have a few concerns about "Treme," some of which have already been addressed in earlier columns. One is the show's committment to an almost mathematically democratic type of TV storytelling -- one that keeps scenes very short, and shuffles from character to character, as if striving to meet a minimum screen time quota for each key actor. "Slip Away" was less committed to that approach than some "Treme" episodes, and that was a good thing. I liked that we got to see Sonny settling into the band but didn't have to hear a word out of his mouth or watch him be bitter and petty and/or vaguely ashamed for the zillionth time. (I find the character tediously shallow.)  And I liked that the most dynamic and engrossing stories (Lt. Colson, Janette and especially Sofia) were more prominent than the others.

My major stylistic complaint -- one that my colleague Edward Copeland has explored in fearsome detail -- is that the season two episodes seem terrified of boring the audience, so they cut away from scenes after 30 seconds or a minute, or two minutes, tops -- even if it means cauterizing a terrific musical number, or shattering what could have been an elegant, self-contained sequence into awkward blocs. The worst such moment was when they cut away from New York's Blue Note to give us a few forgettable seconds from an open mike night in New Orleans, then quickly returned to the Blue Note. This felt like abuse of the hard cut aesthetic. The effect reminded me of an impatient person switching channels on an old TV, turning the knob from left to right and back again. But these are minor gripes. Fact is, decent "Treme" is better than almost anything else on TV, and great "Treme" is sublime. This was sublime.