Residents were given only a 20 minute warning before tornado hit 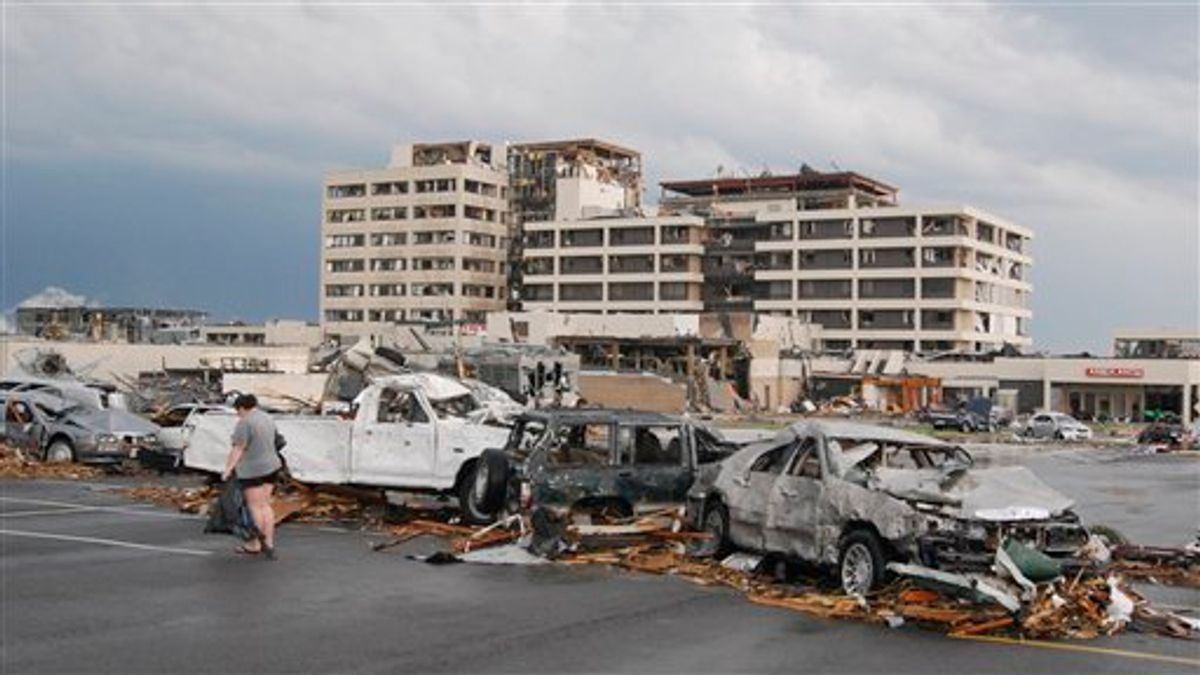 Damaged vehicles litter the parking lot of St. John's Hospital in Joplin, Mo, after a tornado hit the southwest Missouri city on Sunday evening, May 22, 2011. A massive tornado blasted its way across southwestern Missouri on Sunday, flattening several blocks of homes and businesses in Joplin and leaving residents frantically scrambling through the wreckage. (AP Photo/Mike Gullett) (AP)
--

A massive tornado that tore through the southwest Missouri city of Joplin killed at least 89 people, but authorities warned that the death toll could climb Monday as search and rescuers continued their work at sunrise.

City manager Mark Rohr announced the number of known dead at a pre-dawn news conference outside the wreckage of a hospital that took a direct hit from Sunday's storm. Rohr said the twister cut a path nearly six miles long and more than a half-mile wide through the center of town, adding that tornado sirens gave residents about a 20-minute warning before the tornado touched down on the city's west side.

Much of the city's south side was leveled, with churches, schools, businesses and homes reduced to ruins.

Fire chief Mitch Randles estimated that 25 to 30 percent of the city was damaged, and said his own home was among the buildings destroyed as the twister swept through this city of about 50,000 people some 160 miles south of Kansas City.

"It cut the city in half," Randles said.

An unknown number of people were injured in the storm, and officials said patients were scattered to any nearby hospitals that could take them.

Authorities planned to conduct a door-to-door search of the damaged area Monday morning, but were expected to move gingerly around downed power lines, jagged debris and a series of gas leaks that caused fires around the city overnight.

"We will recover and come back stronger than we are today," Rohr said defiantly of his city's future.

"It's a very, very precarious situation," Nixon told CNN. "It's going to be a stark view as people see dawn rise in Joplin, Missouri."

Residents said the damage was breathtaking in scope.

"You see pictures of World War II, the devastation and all that with the bombing. That's really what it looked like," said Kerry Sachetta, the principal of a flattened Joplin High School. "I couldn't even make out the side of the building. It was total devastation in my view. I just couldn't believe what I saw."

The same storm system that produced the Joplin tornado spawned twisters along a broad swath of the Midwest, from Oklahoma to Wisconsin. At least one person was killed in Minneapolis. But the devastation in Missouri was the worst of the day, eerily reminiscent the tornadoes that killed more than 300 people across the South last month.

Among the worst-hit locations in Joplin was St. John's Regional Medical Center. The staff had just a few moments' notice to hustle patients into hallways before the storm struck the nine-story building, blowing out hundreds of windows and leaving the facility useless.

In the parking lot, a helicopter lay crushed on its side, its rotors torn apart and windows smashed. Nearby, a pile of cars lay crumpled into a single mass of twisted metal. Matt Sheffer dodged downed power lines, trees and closed streets to make it to his dental office across from the hospital. Rubble littered a flattened lot where a pharmacy, gas station and some doctor's offices once stood.

"My office is totally gone. Probably for two to three blocks, it's just leveled," he said. "The building that my office was in was not flimsy. It was 30 years old and two layers of brick. It was very sturdy and well built."

St. John's patients were evacuated to other hospitals in the region, said Cora Scott, a spokeswoman for the medical center's sister hospital in Springfield.

Early Monday morning, floodlights from a temporary triage facility lit what remained of the hospital that once held as many 367 patients. Police officers could be seen combing the surrounding area for bodies.

Miranda Lewis, a spokeswoman for St. John's, was at home when the tornado sirens began going off. By early Monday, she still had no details on any deaths or injuries suffered at the hospital in the tornado strike, although she had seen the damaged building.

"It's like what you see someplace else, honestly," Lewis said. "That's a terrible way to say it, but you don't recognize what's across the street.

"I had seen it on television, but until you're standing right here and see the devastation, you can't believe it."

Michael Spencer, a national Red Cross spokesman who also assisted in the aftermath of a tornado that devastated nearby Pierce City in 2003, was also stunned.

"I've been to about 75 disasters, and I've never seen anything quite like this before," Spencer said. "You don't typically see metal structures and metal frames torn apart, and that's what you see here."

Triage centers and shelters setup around the city quickly filled to capacity. At Memorial Hall, a downtown entertainment venue, nurses and other emergency workers from across the region were treating critically injured patients.

At another makeshift unit at a Lowe's home improvement store, wooden planks served as beds. Outside, ambulances and fire trucks waited for calls. During one stretch after midnight Monday, emergency vehicles were scrambling nearly every two minutes.

Winds from the storm carried debris up to 60 miles away, with medical records, X-rays, insulation and other items falling to the ground in Greene County, said Larry Woods, assistant director of the Springfield-Greene County Office of Emergency Management.

Travel through and around Joplin was difficult, with Interstate 44 shut down and streets clogged with emergency vehicles and the wreckage of buildings.

Jeff Lehr, a reporter for the Joplin Globe, said he was upstairs in his home when the storm hit but was able to make his way to a basement closet.

"There was a loud huffing noise, my windows started popping. I had to get downstairs, glass was flying. I opened a closet and pulled myself into it," he told The Associated Press. "Then you could hear everything go. It tore the roof off my house, everybody's house. I came outside and there was nothing left."

An aching helplessness settled over residents, many of whom could only wander the wreckage bereft and wondering about the fate of loved ones.

Justin Gibson, 30, huddled with three relatives outside the tangled debris field of what remained of a Home Depot. He pointed to a black pickup that had been tossed into the store's ruins and said it belonged to his roommate's brother. "He was last seen here with his two little girls," ages 4 and 5, Gibson said.

"We've been trying to get ahold of him since the tornado happened," Gibson said, adding his own house had been leveled.

"It's just gone. Everything in that neighborhood is gone. The high school, the churches, the grocery store. I can't get ahold of my ex-wife to see how my kids are," he said, referring to his three children, ranging in age from 4 months to 5 years.

"I don't know the extent of this yet," Gibson said, "but I know I'll have friends and family dead."

Minneapolis city spokeswoman Sara Dietrich said the death there was confirmed by the Hennepin County medical examiner. She had no other immediate details. Only two of the 29 people injured there were hurt critically.

Though the damage covered several blocks in Minneapolis, it appeared few houses were totally demolished. Much of the damage was to roofs, front porches that had been sheared away, or smaller items such as fences and basketball goals.

In Wisconsin, the mayor of La Crosse declared a state of emergency Sunday after a powerful storm tore roofs from homes and littered streets and lawns with downed trees and debris.

Additional storms were predicted across the southern Plains through Thursday morning.

An advisory from the Storm Prediction Center in Norman, Okla., said warm weather Monday could fuel instability in advance of another weather system. A few tornadoes, some strong, could occur -- starting in Oklahoma and southern Kansas in the afternoon and in North Texas in the late afternoon.