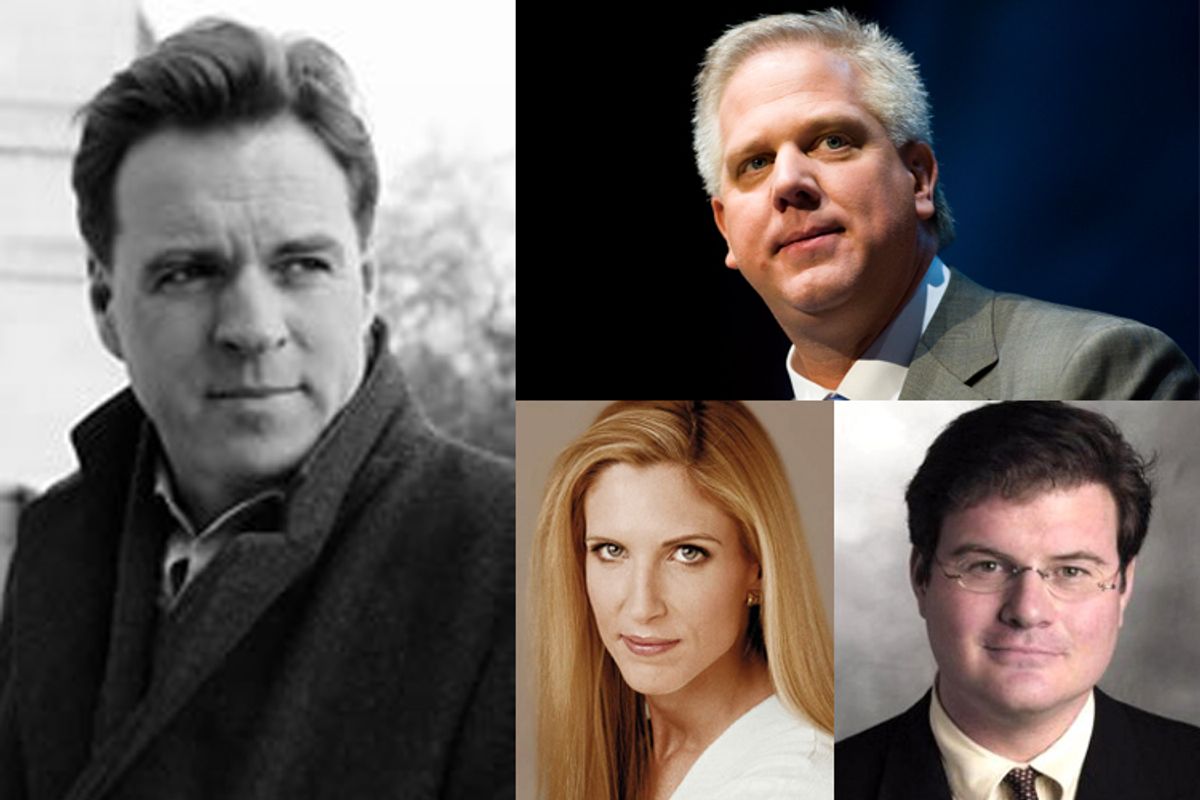 The right-wing British historian Niall Ferguson seems to have conquered America: pushing his latest perishable book, "Civilization," this one based on the trendy and quickly dated conceit of the six (or is it seven?) "killer apps" of Western civilization; writing cover stories for Newsweek; debating foreign policy on TV with Zbigniew Brzezinski; and pouting and snarling his way through a debate about economics with Paul Krugman, Jeff Madrick and Bill Bradley. If you missed his Chicago lecture on the imminent decline of America, then at least on YouTube you can still catch him warning before the 2008 presidential election that "Islamic jihadists" and "Europeans" were hoping that John McCain would lose. Recently, it was announced that Henry Kissinger has made him his official biographer, perhaps in the hope that Ferguson, who thinks that the Kaiser should have been allowed to crush Europe, will be equally kind to Kissinger’s reputation. Time magazine in 2004 named Ferguson one of the 100 most influential people in the world, which might help to explain the condition of the world.

"The Elite Turns Against Obama," screamed a recent headline in the Daily Beast.

According to former New York Daily News gossip columnist Lloyd Grove, the evidence that "the intelligentsia" was turning against Obama consisted of a panel at the Aspen Institute, where the right-wing New York Daily News owner Mort Zuckerman agreed with Ferguson that the Democrats are hurting America. Ferguson, described as a "dashing Brit" by gossip columnist Grove, praised Republican congressman Paul Ryan’s scheme for abolishing Social Security and Medicare, a plan so callous and unpopular that other Republicans have scrambled to distance themselves from it. The Dashing Brit then told the assembled plutocrats that unemployed Americans are lazy: "The curse of long term unemployment is that if you pay people to do nothing, they’ll find themselves doing nothing for long periods of time." On an earlier occasion he created a stir when he compared Barack Obama to the lascivious cartoon character Fritz the Cat, because, he said, both are "black and lucky."

What accounts for the attention lavished by the American media on a huckster as vulgar and shallow as Niall Ferguson? His accent surely is part of the explanation. Only a combined lack of personal and national self-confidence can explain the way that America’s publishers and producers -- many of them insecure, upwardly mobile social climbers -- will fawn over a mediocre British pundit or pop historian whom they would completely ignore if he were Tony Zacarelli from Long Island or Fred Huffernagel from Oregon. Little has changed since the Midwesterner Jay Gatz, to be taken seriously on the Anglophile East Coast, had to change his name to Gatsby before he could qualify as "dashing."

Ferguson is the most prominent of a number of British conservative intellectuals and journalists who have found more sympathetic audiences in the U.S. than in their own country, where their enthusiasm for Victorian imperialism and Victorian economics stigmatizes them as cranks. His Old World accent and reactionary politics might not have been sufficient to earn Niall Ferguson his cisatlantic celebrity, were it not for the demise of American intellectual conservatism, chronicled by Sam Tanenhaus and others. The mass extinction of America’s intellectual right at the hands of anti-intellectual Jacksonian populists like the Tea Partyers has created a lack of native conservative thinkers with impressive academic credentials who are willing to dash to a TV studio at a moment’s notice. And in an era when the conservative movement is symbolized by lightweights like Glenn Beck, Ann Coulter and Jonah Goldberg, rather than William F. Buckley Jr., George Will and Irving Kristol, even Niall Ferguson can be mistaken for an intellectual.

Having begun his career as a historian of 19th-century banking, Ferguson became what in Britain is called a "television don" in 1998 with the publication of his book "The Pity of War," about World War I. Like the historian John Charmley, who expressed the same wish in the case of World War II, Ferguson belongs to the fringe element of British conservatism that regrets the absence of a German-British deal in the first half of the 20th century that would have marginalized the United States and might have allowed the British Empire to survive to this day.

According to Ferguson, Britain should have stayed out of World War I and allowed Imperial Germany to smash France and Russia and create a continental empire from the Atlantic to the Middle East. The joke is on Ferguson’s American conservative admirers, inasmuch as he laments the defeat of the Kaiser’s Germany because it accelerated the replacement of the British Empire by the United States of America and the eclipse of the City of London by Wall Street:

Had Britain stood aside -- even for a matter of weeks -- continental Europe could therefore have been transformed into something not wholly unlike the European Union we know today -- but without the massive contraction in British overseas power entailed by the fighting of two world wars ... And there plainly would not have been that great incursion of American financial and military power into European affairs which effectively marked the end of British financial predominance in the world.

Alas, the world got American primacy and decolonization rather than world domination by the City of London in league with the German General Staff. Fortunately, the U.S. can still redeem itself by re-creating the 19th-century British combination of imperialism and laissez-faire economics, a combination so unpopular in its homeland that it was repudiated by the British people themselves after 1945 without regrets, except on the part of a few far-right Tory crackpots like Niall Ferguson.

In "Colossus: The Price of America’s Empire" (2004), a slapdash tract that followed another titled "Empire: The Rise and Demise of the British World Order and the Lessons for Global Power" (2002), Ferguson declared: "Unlike most European critics of the United States, then, I believe the world needs an effective liberal empire and that the United States is the best candidate for the job." And should the neo-British American empire suffer from a shortage of willing cannon fodder, the Dashing Brit had a solution: "If one adds together the illegal immigrants, the jobless, and the convicts, there is surely ample raw material for a larger American army."

Ferguson displays a Colonel Blimpish brutality so casual that it can disgust even American conservatives. Benjamin Wallace-Wells in the Washington Monthly describes what happened when the British professor compared the tortures at Abu Ghraib to the American army’s hazing of new recruits:

"In behaving the way they did," Ferguson said, "those soldiers and military policemen [at Abu Ghraib] were largely doing to their prisoners what routinely people in the American military do to new recruits."

This was too much for even the conservatives in the audience. The guffaws grew louder, the muttered protests reached the front of the room. In the row in front of me, a broad-shouldered, uniformed officer stood up. "Big disagree here, sir," he bellowed. "Big disagree with your characterization." (Fleetingly, I wondered if this was how colonels address one another in private). "The institution I have spent my life in abhors what went on in Iraq," he said. "It's not the way we treat anyone -- a fresh recruit or a plebe at West Point." The crowd clapped vigorously. In less than 10 minutes, Ferguson had pulled off that rarest of Washington double plays, alienating liberals and conservatives alike.

As his remarks about torture at Abu Ghraib demonstrate, Niall Ferguson has the moral imagination of a teenage boy addicted to gruesome video games. Writing in the right-wing British tabloid the Telegraph in 2006, he described "The Origin of the Great War of 2007 -- and How It Could Have Been Prevented." In this lurid exercise in counterfactual history, Ferguson fantasized that President George W. Bush "was advised by his Secretary of State, Condoleezza Rice, to opt instead for diplomacy. Not just European opinion but American opinion was strongly opposed to an attack on Iran." Because the Bush administration was insufficiently bellicose, the result was the "devastating nuclear exchange of August 2007" between Iran and Israel that "marked the twilight of the West" as "Iraq’s Shiite population overran the remaining American bases in their country and the Chinese threatened to intervene on the side of Teheran."

Here is Niall Ferguson a few years earlier, bloviating in Foreign Policy in 2004 about the global anarchy that might result from a diminution of America’s relative power:

The worst effects of the new Dark Age would be felt on the edges of the waning great powers. The wealthiest ports of the global economy -- from New York to Rotterdam to Shanghai -- would become the targets of plunderers and pirates. With ease, terrorists could disrupt the freedom of the seas, targeting oil tankers, aircraft carriers, and cruise liners, while Western nations frantically concentrated on making their airports secure. Meanwhile, limited nuclear wars could devastate numerous regions, beginning in the Korean peninsula and Kashmir, perhaps ending catastrophically in the Middle East. In Latin America, wretchedly poor citizens would seek solace in Evangelical Christianity imported by U.S. religious orders.

This is typical of the inadvertently self-parodic rants to which Niall Ferguson owes his celebrity in the infotainment industry. The unintentionally comic effect -- not only nuclear wars in East Asia, South Asia and the Middle East, but also mass conversions of Latin Americans to Protestantism! -- brings to mind Bill Murray’s Dr. Peter Venkman in the movie "Ghostbusters":

Dr. Peter Venkman: This city is headed for a disaster of biblical proportions.

Mayor: What do you mean, "biblical"?

Stantz: Fire and brimstone coming down from the skies! Rivers and seas boiling!

Winston Zeddemore: The dead rising from the grave!

Mayor: All right, all right! I get the point!