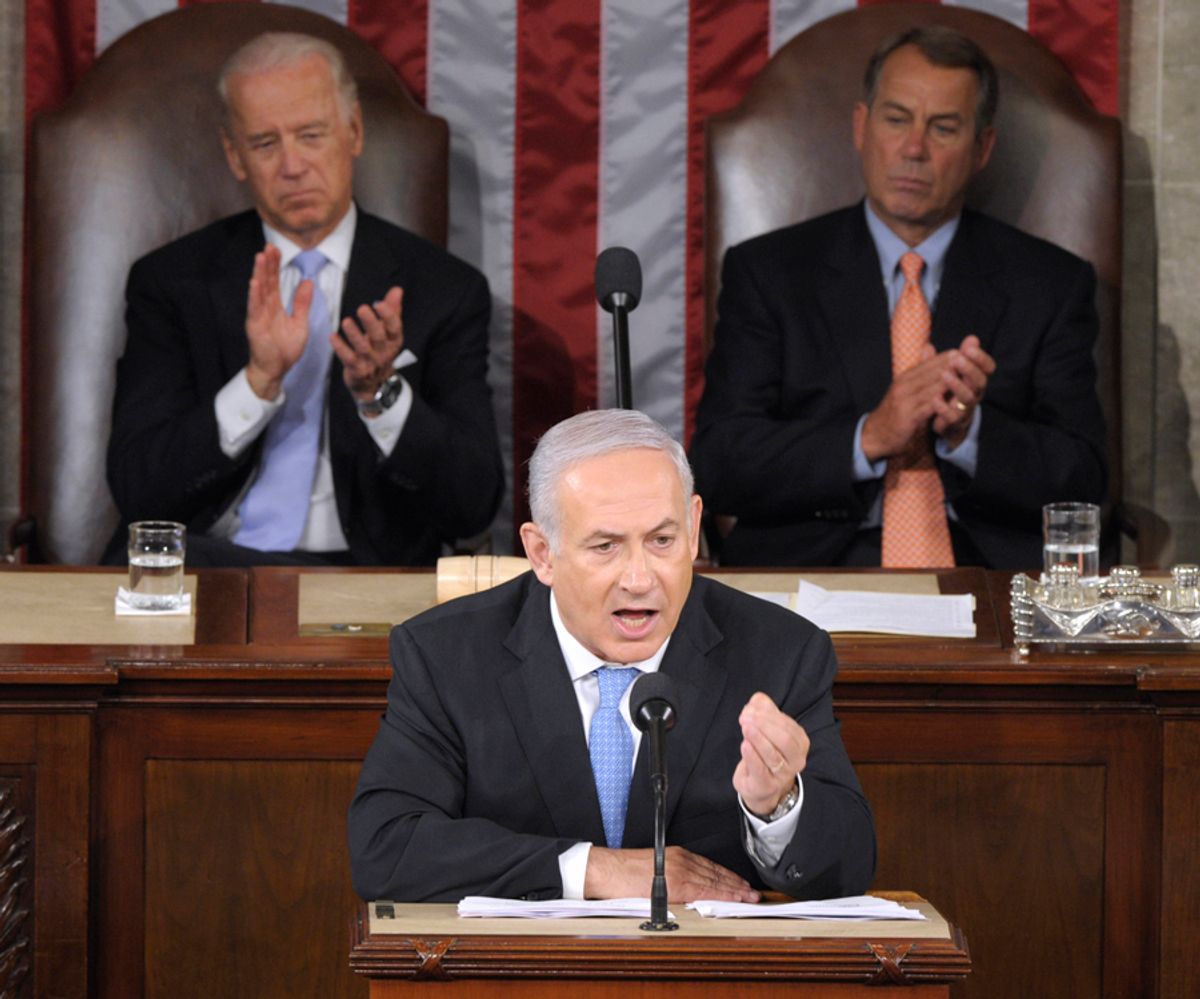 Israel Prime Minister Benjamin Netanyahu got 29 standing ovations during his speech before a joint meeting of Congress today. That compares to just 25 for President Obama's last State of the Union address, ABC points out.

Most members of Congress attended the speech, with a few notable exceptions (such as Sen. Rand Paul). So it's a worthwhile exercise to take a quick look at what members were clapping about during the roughly 50-minute speech. Here'a a quick guide to the lines that drew standing O's, with some explanation and context for just what Netanyahu was talking about:

1. I see a lot of new friends of Israel here as well. Democrats and Republicans alike!

There are increasing signs, even among hard-line pro-Israel types of both parties, that the Mideast conflict is becoming a partisan issue. Netanyahu wants to stress, at least publicly, the overwhelming bipartisan support in the U.S. for Israel and its policies.

3. You got bin Laden! Good riddance!

4. You don't need to send American troops to Israel, we defend ourselves.

The U.S. does, however, give (.pdf) $3 billion of military equipment and aid to Israel every year.

She was later identified as a young Jewish woman from California, Rae Abileah, who yelled, "Stop Israeli war crimes."

6. You can't have protests in the farcical parliaments of Tehran or Tripoli, this is real democracy!

Netanyahu used a similar line when his AIPAC speech was interrupted by Jewish anti-occupation protesters over the weekend. Left-wing Jews also interrupted a Netanyahu speech last year in New Orleans, so this seems like an increasingly common occurrence.

7. In a region where women are stoned, gays are hanged, Christians are persecuted, Israel stands out, it is different.

He's not including the gay, female or Christian Palestinians living under oppressive Israeli military occupation or the Israeli blockade of Gaza.

9. Leaders [like those of Iran] who spew such venom should be banned from every respectable forum on the planet.

10. There are many who rush to condemn Israel for defending itself against Iran's terror proxies. Not you. Not America!

11. The more Iran believes that all options are on the table, the less the chance of confrontation.

Since the campaign and throughout his presidency, this is the exact formulation President Obama has used about Iran and nuclear weapons -- "all options are on the table."

12. This is why I ask you to continue to send an unequivocal message: that America will never permit Iran to develop nuclear weapons.

That's a stronger formulation than Obama has used. It's also worth noting here that Netanyahu was claiming as early as 1995 that Iran was three to five years away from being able to build nuclear weapons.

14. We must also find a way to forge a lasting peace with the Palestinians.

15. I recognize that in a genuine peace we'll be required to give up parts of the ancestral homeland. And you have to understand this, in Judea and Samaria, the Jewish people are not foreign occupiers.

This point, which drew particularly raucous applause, is at odds with international law. "Judea and Samara" is a loaded term favored by the right-wing in Israel that basically refers to the West Bank, which has been ruled by the Israeli military since the 1967 war. The international community views the Israelis who live in the West Bank as settlers and the military that rules it as occupiers. And while Israeli citizenship is extended to the ever-growing population of Jewish settlers in the West Bank, the state has not officially annexed the West Bank besides East Jerusalem.

16. No distortion of history could deny the 4,000-year-old bond between the Jewish people and the Jewish land.

17. They [the Palestinians] should enjoy a national life of dignity as a free viable and independent people living in their own state.

19. And, worst of all, they [the Palestinians] continue to perpetuate the fantasy that Israel will one day be flooded by the descendants of Palestinian refugees. My friends, this must come to an end.

This is a reference to the Right of Return, the concept that Herman Cain fumbled over in an interview on Sunday. Some 700,000 Palestinians were displaced from their homes in 1948, the year of Israel's creation, through a still-disputed combination of forcible expulsion by Jewish forces and flight in the face of conflict. They and their descendants now number in the millions and live in both the West Bank and neighboring Arab countries, where they typically have a lower status than the rest of the population. Israel opposes these refugees' return to their old homes because it would threaten the Jewish ethnic majority in Israel.

20. It's time for President Abbas to stand before his people and say, "I will accept a Jewish state."

Here is what Abbas has said on the matter: "It is not my job to give a description of the state. Name yourself the Hebrew Socialist Republic -- it is none of my business." And: "Our position is that we recognize Israel. We fully believe in the two-state solution -- a Palestinian state on the 1967 borders and the state of Israel, living next to each other in peace and security. This is the best option for both people and we must not distance ourselves from the two-state solution."

21. Israel will not return to the indefensible boundaries of 1967.

See Judea and Samaria item above.

22. The Palestinian refugee problem will be resolved outside the borders of Israel.

Again, this is about maintaining a Jewish ethnic majority in Israel.

Because the sharing of Jerusalem has always been a key Palestinian demand -- and, indeed, because East Jerusalem, which was annexed by Israel in 1980, is still seen as occupied territory by the international community -- this statement by Netanyahu is essentially a rejection of a two-state solution to the conflict.

24. Imagine there's a siren going on now and we have less than 60 seconds to find shelter from an incoming rocket. Would you live that way? Do you think anyone could live that way? Well, we're not going to live that way either.

25. It's vital that Israel maintain a long-term military presence along the Jordan River.

26. Peace cannot be imposed, it must be negotiated.

Translation: Any of you thinking about a more robust role for America or the United Nations in pressing for resolution of the conflict, don't even think about it.

27. Israel will not negotiate with a Palestinian government backed by the Palestinian version of al-Qaida.

When asked by a New York Times reporter on Sept. 11, 2001, for his reaction to the terrorist attacks, Netanyahu replied that "it's very good" for U.S.-Israel relations. Lines like this one are why. Though the comparison between al-Qaida, a stateless, decentralized international terrorist group, and Hamas, a nationalist movement based in Palestine that sometimes uses terrorism, is a stretch.

28. So I say to President Abbas, tear up your pact with Hamas. Sit down and negotiate. Make peace with the Jewish state. And if you do, I promise you this, Israel will not be the last country to welcome a Palestinian state as a new member of the United Nations, it will be the first to do so.

Expect to hear this formulation more and more when the Palestinians go to the U.N. in September to seek recognition of statehood, a move Israel fiercely opposes.

29. May God bless all of you. And may God forever bless the United States of America.

Haaretz columnist Nehemia Shtrasler summarizes where the speech leaves us -- with no negotiations in sight:

Netanyahu is not willing to return to the 1967 borders ("with slight adjustments"), because in his opinion, they are not defensible. He is not willing to withdraw from the Jordan River, and he also wants the Palestinians to declare in advance that they will waive the right of return and recognize Israel as a Jewish state. That is why there is nothing to talk about with regard to resuming negotiations. There's no chance of that. And Obama knows it too.

Here's the video of the speech: