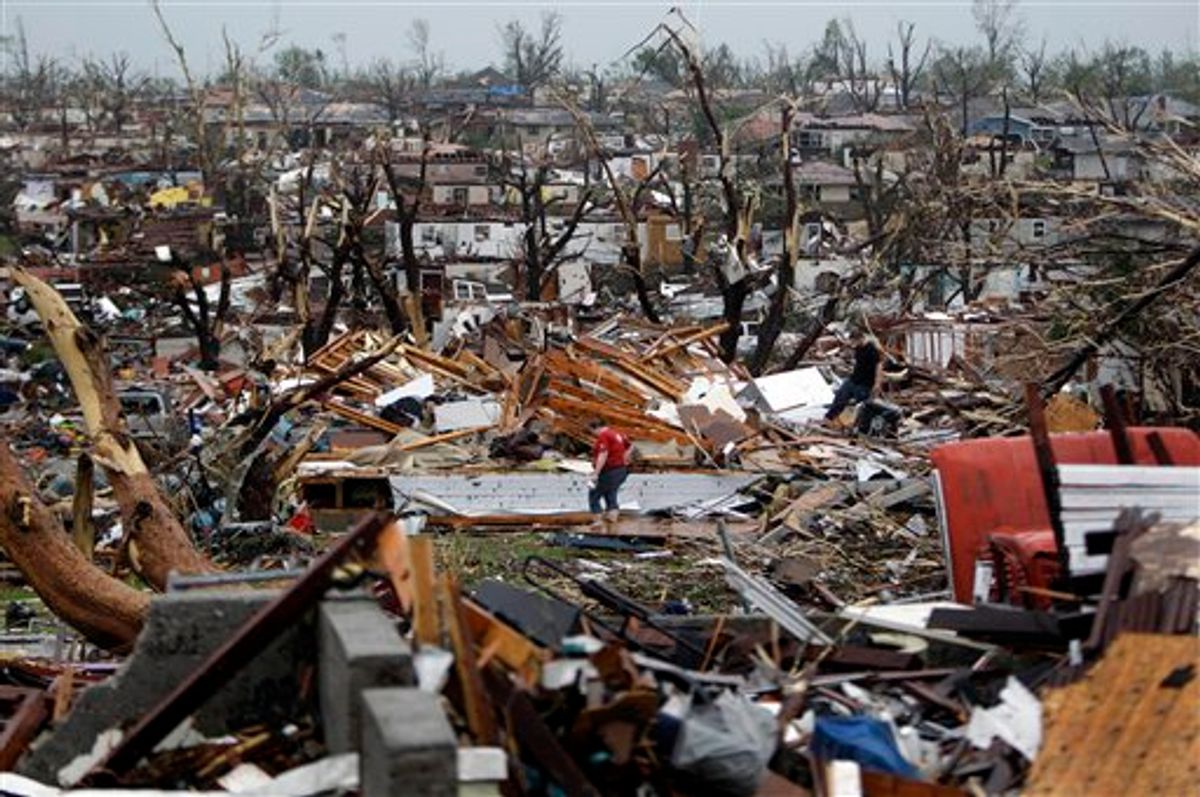 Meghan Miller stands in the middle of a destroyed neighborhood as she checks on her sister-in-law's home Monday, May 23, 2011, in Joplin , Mo. A large tornado moved through much of the city Sunday, damaging a hospital and hundreds of homes and businesses. (AP Photo/Jeff Roberson) (AP)
--

Crews busted holes in concrete slabs and sifted through strewn home goods Tuesday as rescuers focused on crumpled big-box stores and apartment complexes in Joplin in a frantic search for survivors of the deadliest single U.S. twister in about 60 years.

One team poked through the remains of a Home Depot store, while others searched a Walmart and wrecked apartments as the clock ticked down on another round of severe storms that was forecast to hit later in the day.

A later search was planned with search-and-rescue dogs, and officials planned to test the city's nine warning sirens while the sun was shining.

The massive tornado that ripped through the heart of the blue-collar southwest Missouri city of 50,000 people on Sunday was the deadliest on record in nearly six decades.

Sam Murphey, a spokesman for Gov. Jay Nixon's office, said Tuesday that 117 bodies had been found but he didn't know when or where the latest one was discovered. Fire chief Mitch Randles said he knew of only 116 people who had been found.

The two also differed on the number rescued, with Murphey putting it at 17 and Randles saying he knew of only seven.

Rescuers found one person alive at the Home Depot on Monday, but they also discovered seven bodies under one concrete slab, officials said. Search-and-rescue team leader Doug Westhoff said team members have searched as much of the store's interior as they can and are now focused on what's under the concrete panels. After the holes are drilled, dogs will be brought in to try to detect any human scent.

After rescuers pulled seven survivors from rubble Monday, Randles and others said they still hoped to find people alive. Westhoff agreed, but said the outlook was bleak because of the size of the slabs and magnitude of the collapse.

Until this week, the deadliest single tornado on record with the National Weather Service in the past six decades was a twister that killed 116 people in Flint, Mich., in 1953.

More deaths have resulted from outbreaks of multiple tornadoes. On April 27, a pack of twisters roared across six Southern states, killing 314 people, more than two-thirds of them in Alabama. That was the single deadliest day for tornadoes since the National Weather Service began keeping such records in 1950.

The agency has done research that shows deadlier outbreaks before 1950. It says the single deadliest day that it is aware of was March 18, 1925, when tornadoes killed 747 people. The day also saw what weather officials believe was the single deadliest tornado when one twister ripped through Missouri, Illinois and Indiana, killing 695 people.

Sunday's tornado slammed straight into St. John's Regional Medical Center, one of the hardest-hit areas in Joplin. The hospital confirmed that five of the dead were patients -- all of them in critical condition before the tornado hit. A hospital visitor also was killed.

The tornado destroyed possibly "thousands" of homes, Randles told The Associated Press. It leveled hundreds of businesses, including massive ones such as the Home Depot and Walmart.

Speaking from London, President Barack Obama said he would travel to Missouri on Sunday to meet with people whose lives have been turned upside down by the twister. He vowed to make all federal resources available for efforts to recover and rebuild.

"The American people are by your side," Obama said. "We're going to stay there until every home is repaired, until every neighborhood is rebuilt, until every business is back on its feet."

Craig Fugate, director of the Federal Emergency Management Agency, told NBC's "Today" show Tuesday that Obama has declared a disaster in the area, which means residents are eligible for his agency's assistance.

"We're here for the long haul, not just for the response," Fugate said.

The Storm Prediction Center also issued a high-risk warning before the deadly outbreak in the South in April.