Does Rudy Giuliani know how to take a hint? 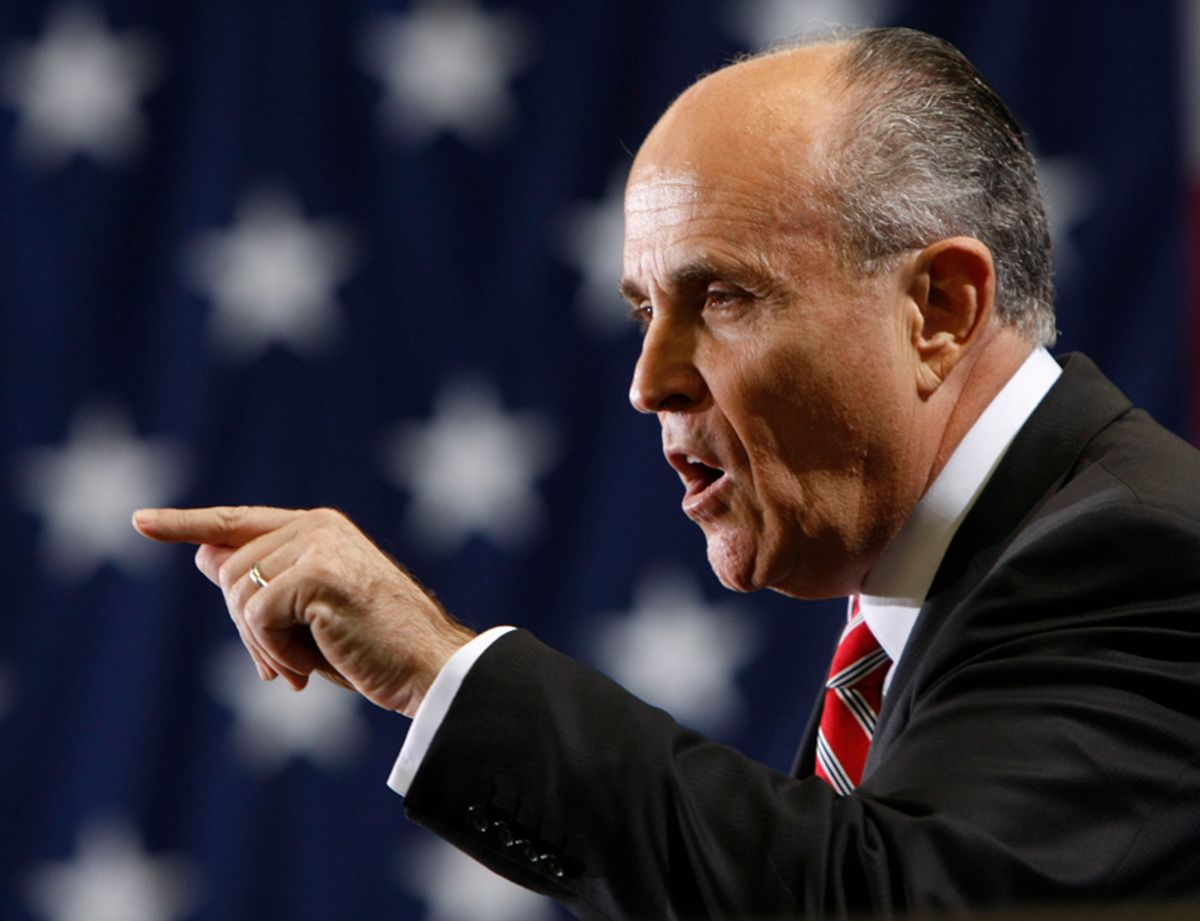 On Sunday night, Rep. Peter King, R-N.Y., floated a Rudy Giuliani trial balloon, claiming to reporters that the former New York mayor has been quietly lining up donors and is seriously considering another presidential campaign. Byron York of the Washington Examiner, who is well-sourced among Beltway Republicans, reported on the possibility with surprising credulity, noting that Giuliani placed third in the most recent New Hampshire poll.

Polls this early are, as York should know, total hogwash. It's a contest based on name recognition, long before most voters have started to pay attention. That's why Giuliani led the Republican field in national polls throughout 2007, with Fred Thompson in second. Both candidates crashed and burned dramatically in the early primaries and were gone before Super Tuesday. There were four main reasons Giuliani's campaign failed last time, and none of them have been ameliorated since:

His political record is too socially liberal. This is a guy who started his mayoral campaign in 1989 running to Ed Koch's left and compared himself to liberal lion Fiorello La Guardia (whom he called New York's greatest mayor). Although he shifted right when David Dinkins got the Democrats' mayoral nomination, Giuliani remained pro-choice and pro-gay rights: He even once bunked with a gay couple and famously dressed in drag. Giuliani endorsed Mario Cuomo for governor in 1994. He was a New York Republican, not the sort who can play in South Carolina. His stance on abortion -- Giuliani gave up on his brief attempt to pretend he is anti-abortion rights when it was revealed that he had donated to Planned Parenthood, the GOP's new ACORN -- would be a major sticking point. Elite national Republicans like King and York don't actually care about abortion -- see the sections in "Game Change" on how McCain advisors had no objection to putting Joe Lieberman on his ticket -- but actual Republicans do. That's why McCain reluctantly concluded that he couldn't choose Lieberman. A pro-choice Republican nominee would either trigger significant defections from the religious right to a third-party candidate or simply prompt many of those voters to stay home next November.

He wasn't terribly popular or successful as mayor. National Republicans may not know this, and New York Republicans like Peter King may have conveniently forgotten, but Giuliani's political career was over before Sept. 11, 2001. His abrasive manner and controversial policies had resulted in lousy approval ratings. He was trailing carpetbagger Hillary Clinton in the 2000 Senate race before he dropped out. His vulnerabilities have never been seriously exploited by an opponent, but don't think Mitt Romney would hesitate to unload on him in a close race, especially now that we're four years further past Giuliani's post 9/11 beatification.

Speaking of vulnerabilities, Giuliani has nasty skeletons in his closet, even by the standards of a Republican politician. He has been twice divorced: His first wife was his second cousin, and he  dumped his second wife for his quirky mistress, Judith Nathan, at a press conference before informing his wife in person. During the last campaign Ben Smith of Politico reported that Giuliani improperly used police escorts to take Nathan to trysts in the Hamptons. To be fair, Giuliani's pecadillos pale in comparison to those of Bernard Kerik, a Giuliani crony who started as his driver and was ultimately promoted to chief of the NYPD. When Giuliani recommended Kerik to be secretary of Homeland Security after the 2004 election, a bevy of embarrassing revelations ensued, from his affair with publish Judith Regan in apartments near ground zero that were paid for by taxpayers and intended for rescue workers, to accepting favors from contractors with alleged mafia links.

He also has no message. Giuliani events in New Hampshire in 2008 were depressing affairs. Small crowds, silently bored to death by Giuliani droning on about the importance of lowering the corporate income tax and the various taxes he cut as mayor. It seemed that Giuliani figured he had the national security hawk vote lined up and needed to focus on fiscal conservatives (since he surely could not count on social conservatives). But his only line that drew applause was a throwaway at the end when he would mention the need to "stay on offense" against Islamist terrorism.

But that brings us to the point that Giuliani's one major selling point -- that he happened to be mayor of New York on 9/11 -- has been surpassed by events since the last election. President Obama just killed Osama bin Laden, so Giuliani can hardly claim that he would be more committed to taking out al-Qaida. The Iraq war, which Giuliani vociferously supported, is viewed by everyone who doesn't work for Fox News as a failure. Even the war in Afghanistan is increasingly unpopular. Meanwhile, the news out of the Middle East is of the Arab Spring, which gives us hope that the region will accommodate itself to modernity and democracy rather than being a fount of anger and frustration looking for a target. Giuliani's dour and militaristic view of Middle Eastern affairs seems especially out of step with the times.

Mostly, Americans are just worried about the economy, and Giuliani already proved last time that he can't win the nomination with an economic policy focus. Giuliani is unlikely to run, and if he does, he is virtually certain not to win the nomination. The discussion of a Giuliani candidacy is evidence of nothing so much as the desperation of Republicans who want an alternative to their current uninspiring field. But they should take heart: Michele Bachmann might still run.