The president ruled out a deadline for ending NATO's military assault 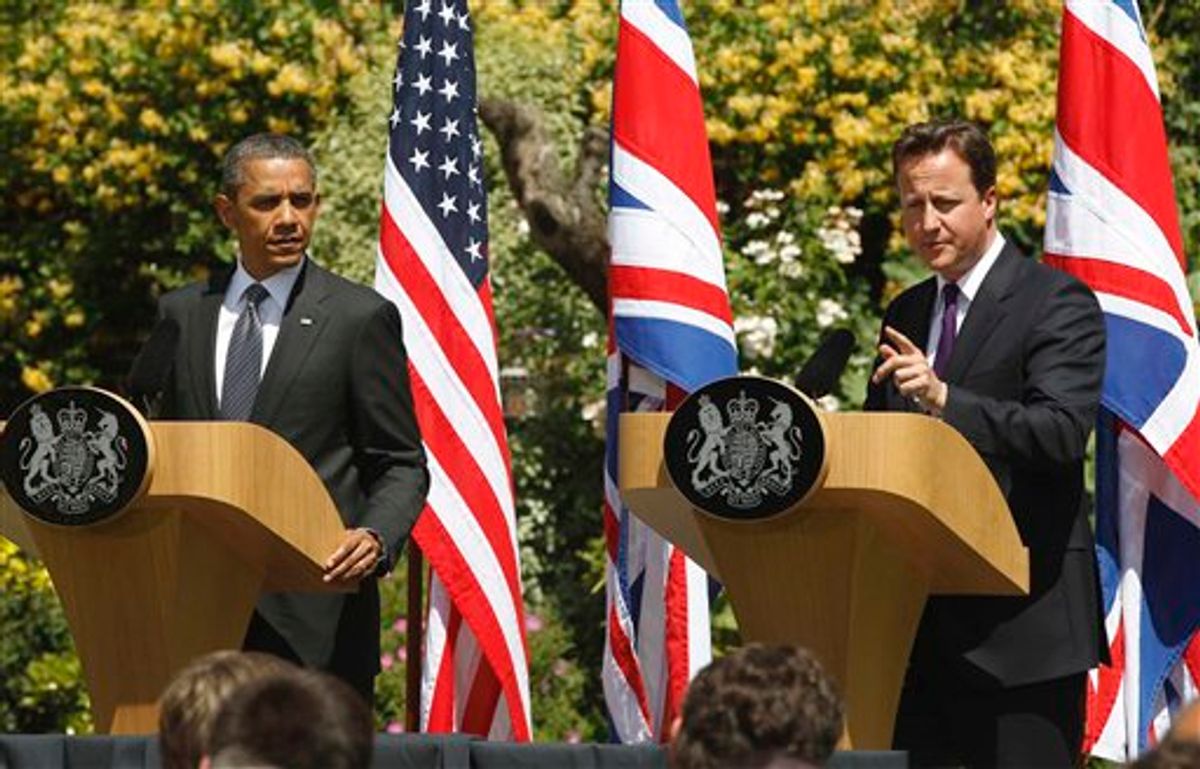 President Barack Obama and British Prime Minister David Cameron on Wednesday promised a relentless and punishing pummeling of Moammar Gadhafi's forces in Libya, pressing for his ouster. Obama ruled out a deadline for ending NATO's military assault and said it would be over "in a timely fashion."

"There will not be a let-up in the pressure we are applying" on Gadhafi, the visiting president said Wednesday at a joint news conference with Cameron, ahead of an address that Obama was to make to both houses of the British Parliament.

"Ultimately this is going to be a slow, steady process in which we're able to wear down the regime forces," Obama said.

"I believe that we have built enough momentum that, as long as we sustain the course, we're on, he will step down," the president said.

Cameron rallied behind Obama's approach, saying what was needed in Libya was "patience and persistence."

In a wide-ranging question and answer session that exposed a disagreement over Mideast peacemaking strategy, Obama and Cameron reaffirmed their joint resolve on Libya. The statements of mutual support came despite complaints among some NATO countries about the reduced U.S. role since NATO took the lead after the initial days of the two-month-old campaign against Gadhafi.

"We've been extraordinarily successful in avoiding civilian casualties," Obama said at one point. And he once again ruled out ground forces in Libya. "That means that sometimes we may have to be more patient than people would like," he conceded.

Said Cameron: "I would agree that the two key things here are patience and persistence." He said "we're extremely strong together in wanting to see the same outcomes."

France among other NATO countries has pushed for a more aggressive military approach in Libya, but Obama gave no indication that increased firepower would be forthcoming from the U.S. even though officials in some allied nations would like to see that.

At the same time, the president said the U.S. is "strongly committed to seeing the job through, making sure that, at a minimum, Gadhafi doesn't have the capacity to send in a bunch of thugs to murder innocent civilians and to threaten them."

The international community has stepped up both the air campaign and diplomatic efforts against the regime in a bid to break a virtual stalemate between the rebels in the east and Gadhafi, who maintains a stranglehold on most of the west.

The military campaign in Libya began with what seemed a narrowly defined mission: to enforce a no-fly zone and protect civilians from attack. Two months later, the campaign has evolved into a ferocious pounding of the country's capital, Tripoli, in what appears an all-out effort to oust Gadhafi. But that goal remains elusive.

The Libyan opposition remains weak. NATO, the North Atlantic military alliance which took over command of the campaign from the U.S. on March 31, appears to have no clear exit strategy. Two of the allies, Britain and France, have descended into public squabbling over bringing the fight closer to Gadhafi with attack helicopters. And the French foreign minister said Tuesday his country's willingness to continue the campaign was not endless.

On Middle East peace, Cameron strongly supported Obama's recent speech in which the president explicitly endorsed a return to Israel's pre-1967 borders, along with mutually agreed-to land swaps, as the starting point for peace talks with Palestinians.

That stance from Obama initially angered Israel, although nerves have calmed as Obama emphasized the nuances of his position as representing no departure from the stances of previous U.S. administrations.

But differences between the allies emerged on the question of the Palestinians' unilateral pursuit of statehood at the United Nations.

Obama strongly opposes the move, as he reiterated Wednesday.

"The only way that we're going to see a Palestinian state is if Israelis and Palestinians agree on a just peace. And so I strongly believe that for the Palestinians to take the United Nations route, rather than the path of sitting down and talking with the Israelis, is a mistake. And it does not serve the interests of the Palestinian people," Obama said.

"The United States will continue to make that argument both in the United Nations and in our various meetings around the world."

European countries have been more open to a statehood bid by the Palestinians, and Cameron declined to commit himself one way or the other.

"We don't believe that the time for making a decision on the UN resolution -- there isn't even one there at the moment -- is right yet," Cameron said. "We want to discuss this within the European Union and try to maximize the leverage and pressure the European Union can bring on both sides to get this vital process moving."

On another matter, Obama said the U.S. is increasing pressure on Syria's President Bashar Assad and his regime, which has been attacking protesters there.

The news conference came on day three of Obama's four-country, six-day Europe tour, which began in Ireland and will take him to France on Thursday for an economic summit, and finally to Poland.