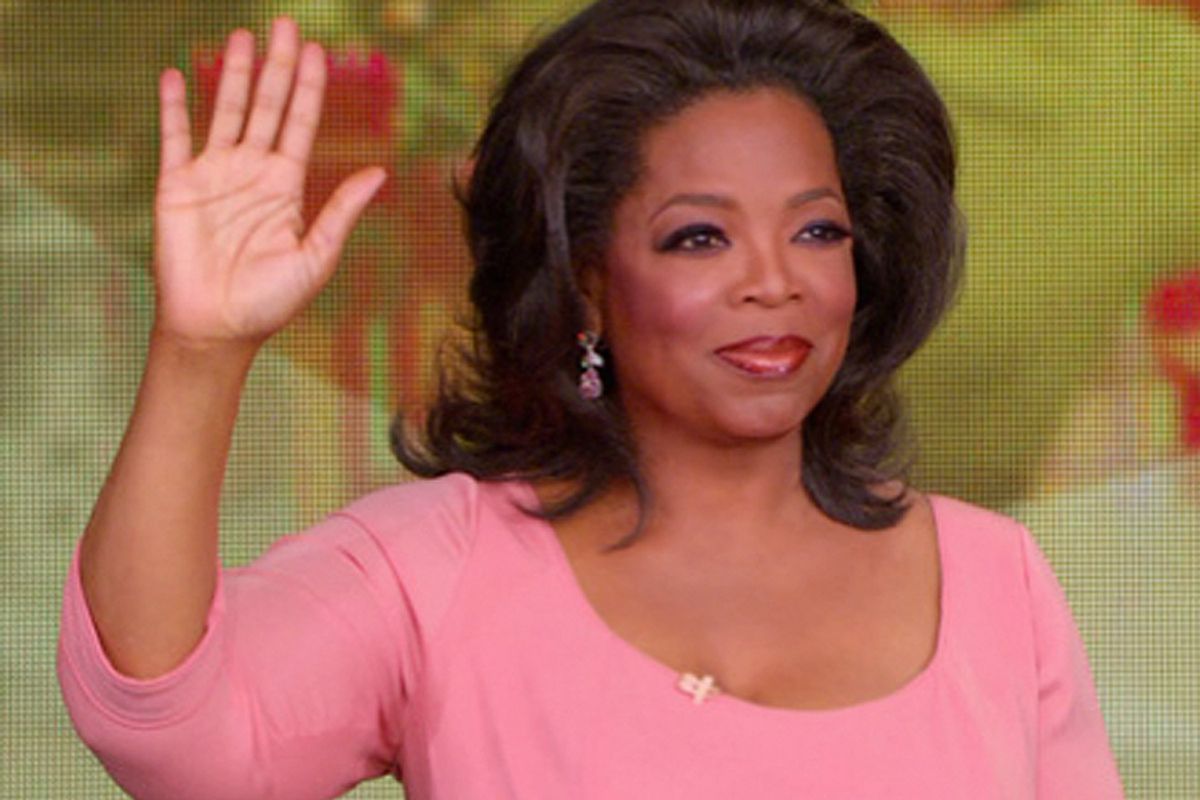 Oprah Winfrey's final show summed up everything she's been about for a quarter century. It was funny, warm, sweet and informative, and felt easygoing even though it was clearly written and rehearsed within a millimeter of its life. The episode had sharing and oversharing, confessions and anecdotes, photographs of Oprah in unfortunate clothes and hairstyles, and callbacks to shows and guests that made a big impression on the host during her journey toward self-knowledge -- which, she assured us, was what her boundary-breaking, influential, astoundingly popular stint on daytime was truly about, anyway.

No, wait, scratch that. Her show wasn't truly about Oprah at all. It was about you. All of you. But especially you, the individual sitting there watching her "every day," as she said.

She had a message for you, the individual. Several messages, actually -- and they were all intertwined: Take responsibility for your life. Be honest with yourself and others. Be responsible for the energy you put out in the world, because that energy comes back around eventually. Also: There is a God, or a life force, and you should get to know him/her/it, because he/she/it can improve your judgment and guide your life.

There was a clip reel of people admitting things on TV that they had never told close friends and family members. They said they were alcoholics or drug addicts, that they had HIV, that they had endured or inflicted spousal abuse. The confessions had a snowball effect and became collectively cathartic, Oprah said: "Little by little, we started to release the shame."

One of the clips was of Oprah herself circa 1986, revealing that she herself had been sexually abused as a child. Another clip referenced the recent broadcast in which actor-director Tyler Perry said he'd been sexually abused as a child, then led an audience of 200 fellow sexual abuse survivors, all men, while they stood together holding pictures of themselves as kids.

Long sections of Oprah's final syndicated broadcast, which amounted to a 42-minute monologue interspersed with video clips, suggested a church service, though precisely what kind varied from moment to moment.

Sometimes it felt like Sunday school for kids. Other times it felt like a sermon, or the opening remarks of a self-help group leader opening a meeting in a church basement.  "Don't wait for anybody else to fix you, to save you or complete you," she said. "'Jerry Maguire' was just a movie. [But] no one completes you. We have seen that with guest after guest. When you accept that you are responsible for your life, you...get....free."

Still other times the broadcast evoked the famous sequence in "The Adventures of Tom Sawyer" where Tom Sawyer and Huck Finn, presumed dead, attend their own funeral service and hear themselves eulogized. But here was Oprah doing the eulogizing. In an especially unfortunate moment, she suggested that God was responsible for the meeting of her father's sperm and her mother's egg. That may very well be true, but if so, it's true for every other human being as well -- and when you put it in the words that Oprah chose, it can't help but sound oddly messianic.

Oprah's last words before exiting stage left were, "to God be the glory."

She talked about how, deep down, she really wanted to be a teacher, and near the end of the broadcast, she introduced her very first mentor, her fourth grade teacher Mrs. Mary Alice Duncan, who was sitting there in the audience, tearing up and grinning.

She said that her guests taught her that there was "no need to feel superior to anybody" because "there is a common thread that runs through all of our pain and all of our suffering, and that is unworthiness, not feeling worthy enough to own the life that you were created for...Your being here, your being alive, makes worthiness your birthright. You alone are enough."

She said that within each person, no matter what his or her race, creed, color or life experience, is a little voice that asks, "Do you see me? Do you hear me? Does what I say mean anything to you?" That voice, Oprah said, was what she hoped to answer, encourage and embrace over the course of 25 years and 4,561 shows.

It would have been nice if, at some point during the telecast, even a single audience member had been permitted to utter one syllable. There was no dialogue, only monologue interspersed by cheers, laughter and applause. The key to Oprah's success, she assured us, is that she knows that deep down, everyone wants to be heard. But in this last broadcast, nobody else got a word in edgewise.

It was a final summation in a career which, judged in terms of social good and emotional healing, required no defense. Oprah is a force for good, period. She may inspire love, loathing, bafflement, amusement, irritation, you name it, but there is no possible way to evalute the sum total of her career on TV without concluding that the world is a somewhat better place because she was in it. And yet here she was making a case for herself, Oprah Winfrey for the defense, as if she wasn't worthy of all this attention and acclaim. As if she didn't get her own memo. It was poignant in ways she herself probably didn't intend.

She left her stage, her classroom, her pulpit, unfinished. A work in progress.