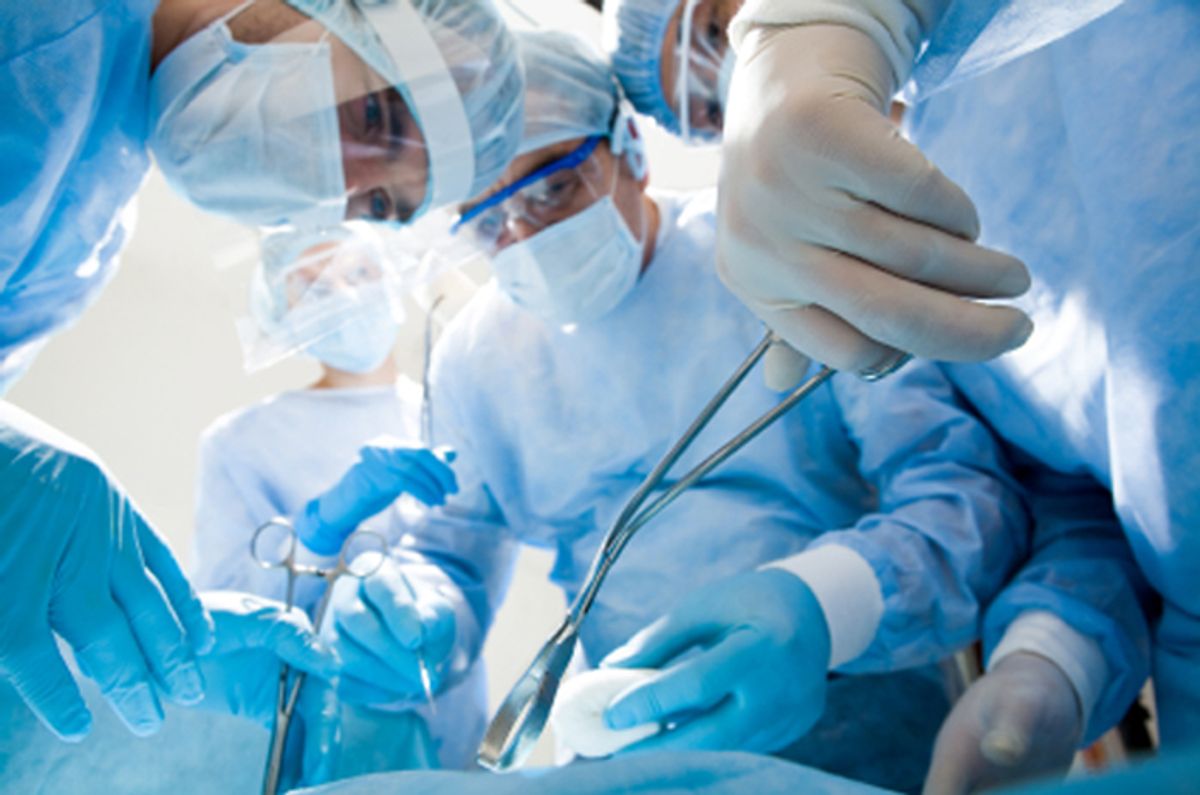 There's this lawmaker out of Kansas, Rep. Peter DeGraaf, who has a lot to say about abortion. He's currently best known for saying that women should plan ahead in case of rape and not expect their regular insurance to cover an abortion after an assault. And I could spend a lot of time discussing the flaws in his logic, or even hashing out when life begins, but what I'm really concerned about is the idea that anyone besides a pregnant woman should have a say in what she does with her body after finding out she's pregnant.

I'm a mom, and I love my sons more than anything. And it is because I love them that I had an abortion at 20 weeks. It was my fifth pregnancy (I'd had two earlier miscarriages), and, as it turned out, my last. There was trouble from the beginning; I didn't experience any of the normal indicators of pregnancy, so I was already ten weeks along when I found out. I hadn't so much as missed a period; in fact, I was seeing an OB/GYN because of the increased heaviness in my cycle. When we found out, I talked it over with my husband and we debated an abortion before deciding we'd try to make it work. My doctor told me that my pregnancy was very high risk and that she wasn't sure of a good outcome. Per her instructions, I took it very easy because I wanted to give the baby the best possible chance. But I kept having intermittent bleeding and I knew there was a good chance I wouldn't be able to carry to term.

I was taking an afternoon nap when the hemorrhaging started while my toddler napped in his room when I woke up to find blood gushing upward from my body. Though I didn't know it at the time, I was experiencing a placental abruption, a complication my doctor had told me was a possibility. My husband was at work, so I had to do my best to take care of me and my toddler on my own. I managed to get to the phone and make arrangements for both of my children before going to a Chicago hospital.

Everyone knew the pregnancy wasn't viable, that it couldn't be viable given the amount of blood I was losing, but it still took hours for anyone at the hospital to do anything. The doctor on call didn't do abortions. At all. Ever. In fact, no one on call that night did. Meanwhile, an ignorant batch of medical students had gathered to study me -- one actually showed me the ultrasound of our dying child while asking me if it was a planned pregnancy. Several wanted to examine me while I lay there bleeding and in pain. No one gave me anything for the pain or even respected my request to close the door even though I was on the labor and delivery floor listening to other women have healthy babies as the baby I had been trying to save died in my womb.

A very kind nurse risked her job to call a doctor from the Reproductive Health Clinic who was not on call, and asked her to come in to save my life. Fortunately she was home, and got there relatively quickly. By the time she arrived, I was in bad shape. The blood loss had rendered me nearly incoherent, but she still moved me to a different wing and got me the painkillers no one else had during the screaming hours I'd spent in the hospital. After she checked my lab tests, she told us I would need two bags of blood before she could perform the procedure. Her team (a cadre of wonderful students who should all go on to run their own clinics) took turns checking on me and my husband. They all kept assuring me that soon it would be over, and I would feel much better. My husband had to sign the consent for surgery (I was clearly not competent enough to make decisions), and they took me away along with a third bag of blood to be administered during the procedure.

Later I found out that the doctor had taken my husband aside as they brought me into surgery. She promised him she would do her best to save me, but she warned him there was a distinct possibility that she would fail. The doctor who didn't do abortions was supposed to have contacted her (or someone else who would perform the procedure) immediately. He didn't. Neither did his students. Supposedly there was a communication breakdown and they thought she had been notified, but I doubt it. I don't know if his objections were religious or not; all I know is that when a bleeding woman was brought to him for treatment he refused to do the only thing that could stop the bleeding. Because he didn't do abortions. Ever.

My two kids at home almost lost their mother because someone decided that my life was worth less than that of a fetus that was going to die anyway. My husband had told them exactly what my regular doctor said, and the ER doctor had already warned us what would have to happen. Yet none of this mattered when confronted by the idea that no one needs an abortion. You shouldn't need to know the details of why a woman aborts to trust her to make the best decision for herself. I don't regret my abortion, but I would also never use my situation to suggest that the only time another woman should have the procedure is when her life is at stake. After my family found out I'd had an abortion, I got a phone call from a cousin who felt the need to tell me I was wrong to have interfered with God's plan. And in that moment I understood exactly what kind of people judge a woman's reproductive choices.

Mikki Kendall is a writer and occasional feminist.