Scotty McCreery wins in a star-studded finale, but the big question is: Can this show survive? 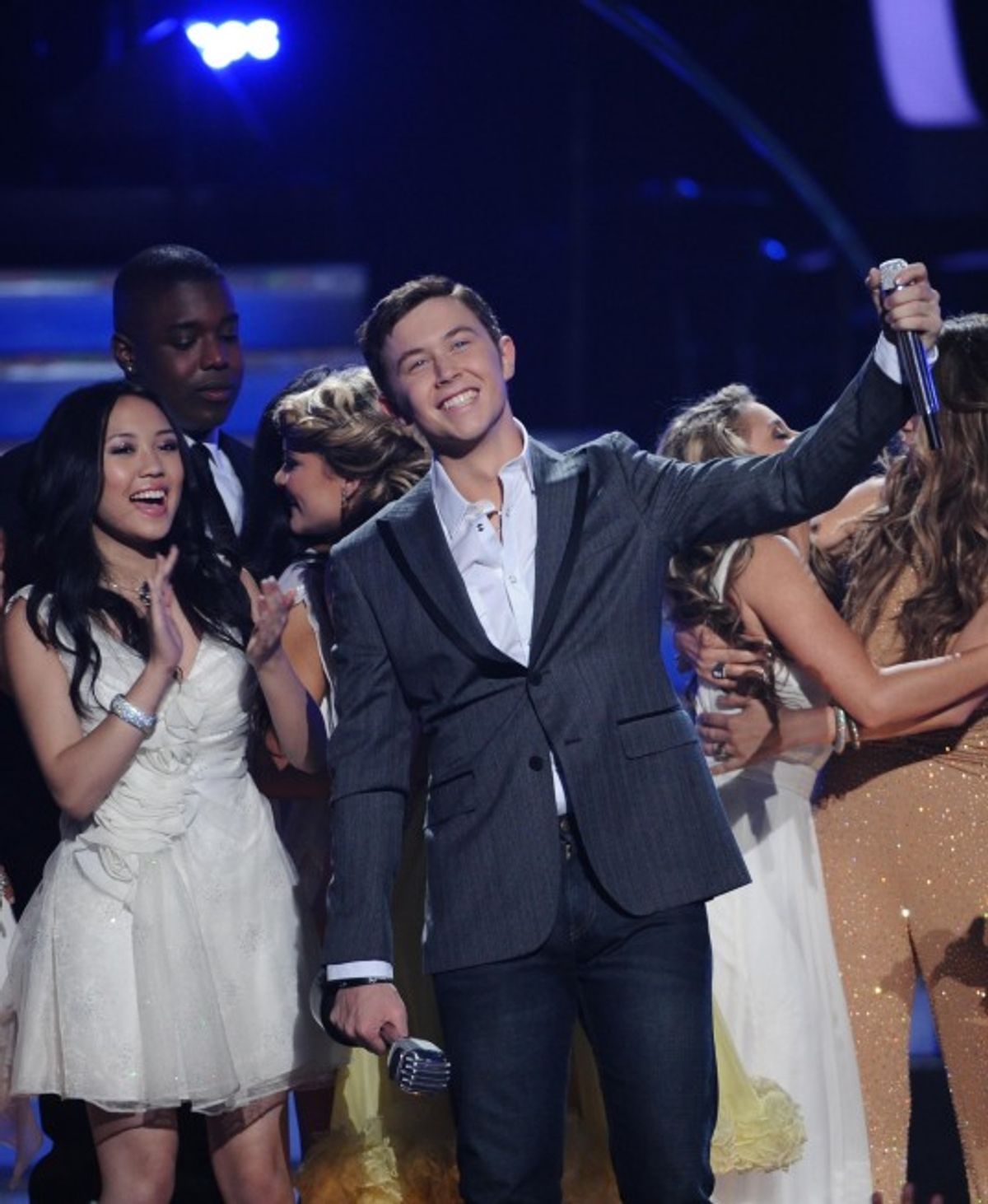 AMERICAN IDOL: Scotty McCreery learns that he is the next American Idol during the season ten AMERICAN IDOL GRAND FINALE at the Nokia Theatre on Weds. May 25, 2011 in Los Angeles, California. CR: Michael Becker/FOX
--

In its buildup-to-payoff ratio, the "American Idol" finale might be the most bloated, least thrilling TV event of any given year. If you, the loyal viewer, follow the show's mini-drama from January through May, watching the contestants strive and then disappear and developing an attachment, however fleeting, to whoever's left, the Fox network will reward you with a two-hour special that wraps up the story. Problem is, the conclusion will be packed into the last five minutes of an old-fashioned, eclectic variety show that advertises everything from the earnest foxiness of Beyoncé to the domestic heat of "Idol" judge Jennifer Lopez and husband Marc Anthony's superstar marriage, plus a totally gratuitous number from Broadway's "Spider-Man: Turn Off the Dark." (Spoiler alert if you spared yourself the annoyance and didn't watch.)

Baby-faced country crooner Scotty McCreery, a 17-year-old high school student from Garner, N.C., was named this year's Idol over runner-up Lauren Alaina (another country singer, intriguingly; was the dominance of C&W a fluke or an omen?). McCreery was so thunderstruck that he could barely get through his victory number. As he drifted around and upon the stage, he tried to hug every available family member, plus all of his fellow contestants. He was so overcome with emotion that he could hardly get through a line without dissolving into stunned giggles. By the end he fell to his knees and held his head in his hands, then stood up and started trying to catch confetti on his tongue like snowflakes.

Aside from the climactic crowning, the "Idol" performers themselves didn't offer too many thrills. That fell to the special's guest stars, a Who's Who of contemporary pop that included Lady Gaga (looking like a character out of "StarGate"), Bono and The Edge (joining in on the "Spider-Man" plug), Jack Black (dueting with twice-hospitalized "Idol" contestant Casey Abrams on Queen's "Fat Bottomed Girls") and the forever-smooth Tony Bennett (doing "Steppin' Out With My Baby" alongside Haley Reinhart). The duo of the night was unquestionably Anthony and Lopez, who jolted the mostly torpid pageant to life with a raucous, shimmying Latin pop showcase with Sheila E. on drums. (It was hilarious and exactly right that Lopez made her entrance walking backward -- as if hiding her face would have disguised her identity.)

The big question of the night, though, had nothing to do with anyone involved with "Idol." It was, How long can "Idol" maintain its dominance? That's not a rhetorical question -- not with the rival series "The Voice" offering a livelier, more refined version of the "Idol" format, and "The X Factor," a pet project of ex-"Idol" judge Simon Cowell, waiting in the wings.

What do you think, readers? Were you happy with McCreery winning? Would you have been happy with any of this year's "Idol" contestants, who were widely praised for their talent and energy but did almost nothing for this grumpy viewer? Did you like the trio of Lopez, Steven Tyler and Randy Jackson in the judges' chairs, or do you miss Cowell? Do you dislike the traditional, two-hour, padded-out finale, or did you just see it as an old-fashioned, eclectic variety series and sit back and enjoy the spectacle?

And did you find emcee Ryan Seacrest's opening factoids about the vote as unnerving as I did? "You set a world record last night with 122 million votes," he told the audience. That's only slightly less than the number that cast votes in the 2008 presidential election.