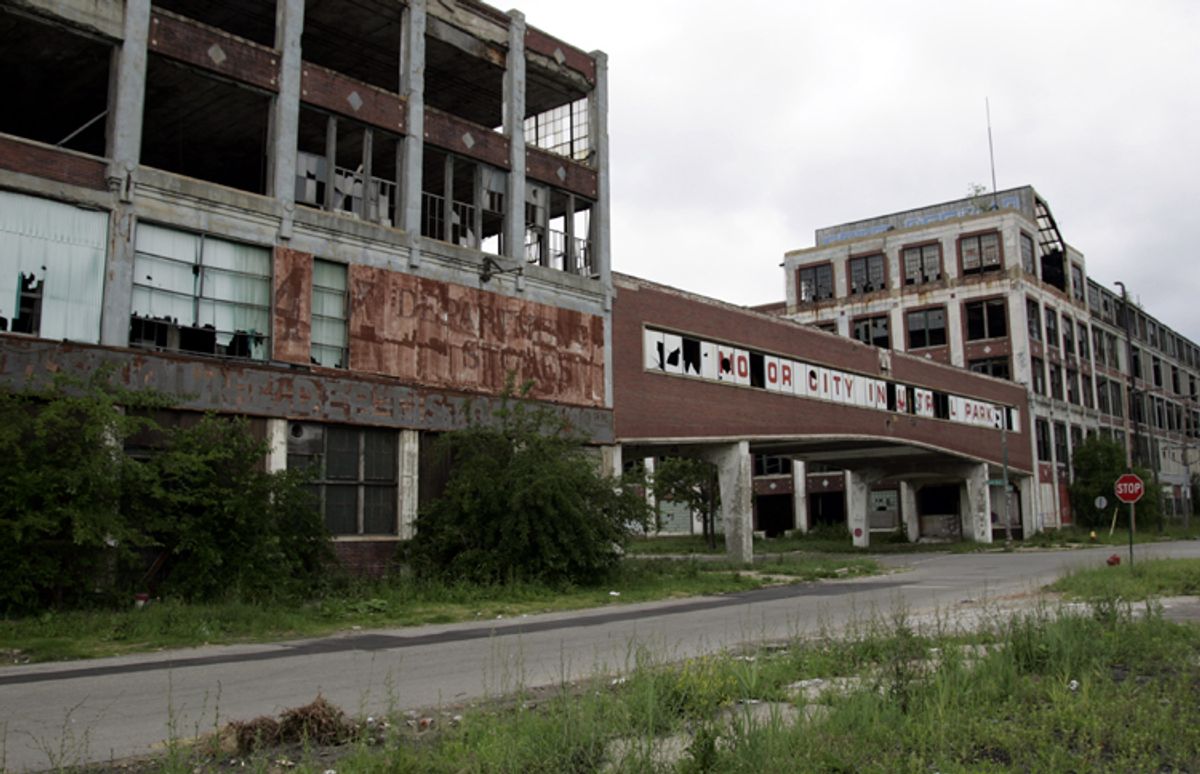 The abandoned and decaying Packard Motor Car Manufacturing plant, built in 1907 and designed by Albert Kahn, is seen near downtown Detroit, Michigan June 21, 2009. As communities from Buffalo to Milwaukee struggle with shuttered factories and vacant neighborhoods, some have turned abandoned properties into parks, gardens and other open space, even going so far as to plow under entire neighborhoods. In Flint, Michigan, the birthplace of General Motors, a pioneering program that allows local government to capture profits from tax foreclosures has generated funds to demolish over 1,000 abandoned homes in the past five years. Picture taken June 21. REUTERS/Rebecca Cook (UNITED STATES TRANSPORT BUSINESS EMPLOYMENT) (Â© Rebecca Cook / Reuters)
--

Senator Orrin Hatch, frantically trying to position himself ever further to the right as he desperately attempts to ward off a Tea Party primary challenge in his home state of Utah, says Congress should just go ahead and approve three free trade agreements, without offering aid to American workers who might lose their jobs as a result of the new pacts.

Hatch, who has questioned the Obama administration's requirement for passage of Trade Adjustment Assistance (TAA) in tandem with trade deals with Panama, Colombia and South Korea, said there's no appetite on Capitol Hill for more spending, even for a program that re-trains workers.

"We don't have the votes to pass TAA through this Congress, so why hold up three trade agreements to do this," Hatch said during a Thursday hearing on the U.S-Korea agreement.

"It doesn't make sense to me."

I don't care what your position on "free trade" is -- the vast majority of ecoomists, left, right and middle, agree that trade produces both winners and losers. Ask almost any blue collar worker in the Midwest: even if it possible to show that the United States gains a net benefit from trade overall, that's hardly comforting to a middle-aged man or woman who has just lost their job due to competition with China or Mexico.

The political consensus that government has a responsibility to those workers has a long history. As President John F. Kennedy declared when making the case for the Trade Expansion Act of 1962," "When considerations of national policy make it desirable to avoid higher tariffs, those injured by that competition should not be required to bear the full brunt of the impact. Rather, the burden of economic adjustment should be borne in part by the Federal Government."

Republican callousness to workers isn't new, but Hatch's "doesn't make sense" argument signifies a new low in Congressional deal-making. Typically both sides compromise to get an agreement neither is completely happy with. Hatch's position is: We won't compromise, so you should just give up and do what we want.

I'd like to say that doesn't make much sense, but since it seems to be the default GOP bargaining position right now, I guess we have to take it seriously.