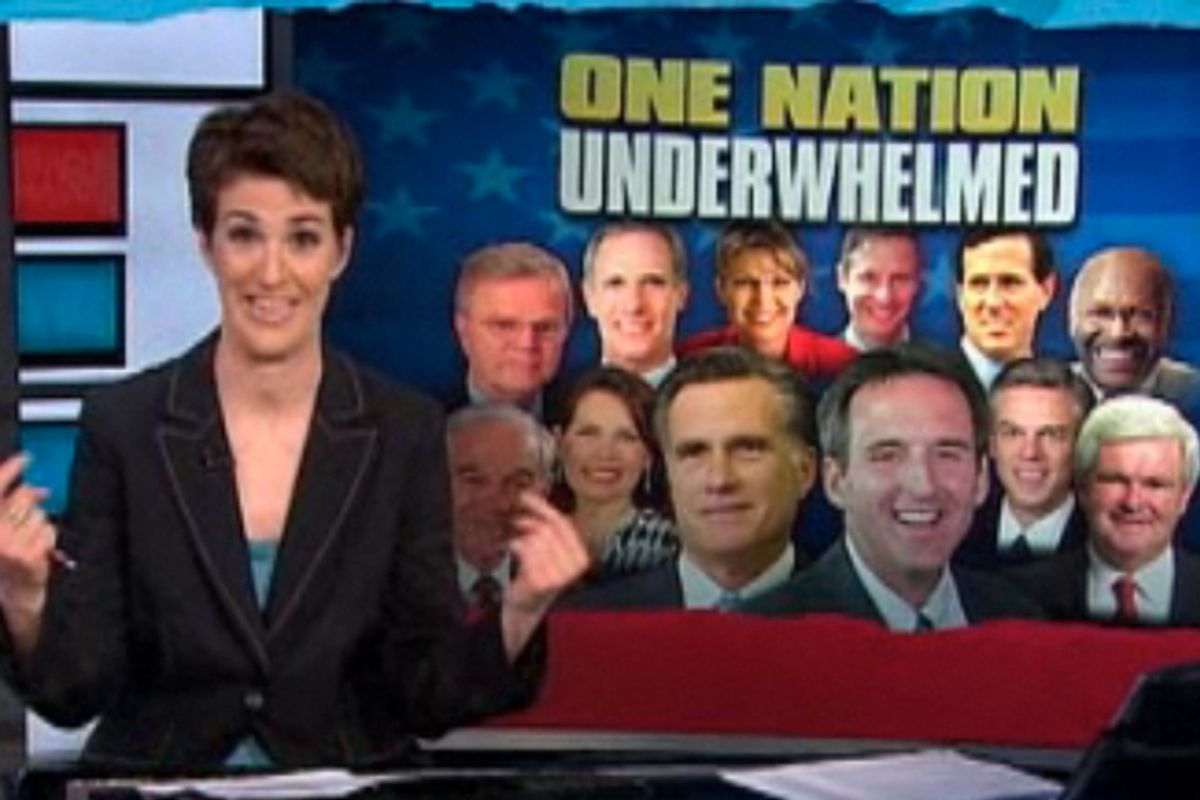 It is absolutely true that the Republican race for president has attracted an unusually large number of fringe candidates who would be unelectable in a general election and who have virtually no chance of winning the nomination. It is also true that the more mainstream GOP candidates in the race are not exactly stirring passion and excitement among the party's base -- and that Republican officials, activists and voters would love it if some white knight candidate would ride to their rescue.

But let's not get carried away about the significance of all of this.

For instance, on her MSNBC show on Tuesday night, Rachel Maddow asked:

How much should it be seen as an insult to Mitt Romney that his status as the clear front-runner right now has got Rudy Giuliani floating the idea of running again, has got Donald Trump -- seriously -- floating the idea again of running, of getting back in, has got former New York Governor George Pataki threatening that he is going to run, has got Roy Moore -- the Alabama Ten Commandments guy -- forming an exploratory committee, has even got Thaddeus McCotter -- who? -- Thaddeus McCotter threatening to run and getting all sorts of Beltway press for it?

I'm going to go with: Not much.

That Donald Trump is opening his mouth about anything means nothing. That Rudy is pretending to be eyeing another run speaks mainly to his ego (and to his knowledge that it's a good way to appear relevant and to get on television). And that McCotter (a Michigan congressman best known -- to the extent he's known at all -- from his appearances on an overnight show on Fox News) and Moore are making some noise speaks only to how easy it's become in the age of cable news, blogs and social media for almost anyone to earn the title "presidential candidate." Mike Gravel even managed to pull it off four years ago!

There just isn't a correlation between the zaniness of the candidates and potential candidates who take advantage of this media environment and the strength of the serious candidates who are also in the race. This isn't to say that all is well in Romney World, but a a much fairer statement about his campaign would go something like this:

And Romney should also be encouraged by history, because we've actually seen a set of conditions like this before in the modern presidential election era -- 20 years ago when Democrats were as dismayed as Republicans are now over their choice of candidates. The story of the 1992 campaign -- when Bill Clinton emerged from that disappointing crop of candidates and ousted George H.W. Bush -- has received a fair amount of attention this week, but one point is worth reinforcing: As late as six months before the 1992 general election, Democrats were openly and loudly declaring Clinton unelectable and lamenting that they had no choice but to nominate him.

Democratic despair in the '92 cycle actually went through several phases.

The first came in the spring and summer of 1991, when Bush's post-Gulf War popularity -- a 91 percent approval rating in one March survey -- scared off every big-name Democrat: Jay Rockefeller, Bill Bradley, Dick Gephardt, Sam Nunn, Lloyd Bentsen, Al Gore and so on. For months, the race was frozen, with only Paul Tsongas (an unknown ex-one-term senator who had left office in 1984 after being diagnosed with lymphoma) and Virginia Gov. Doug Wilder making any moves. The '92 race looked unwinnable for any Democrat. Stories about Democratic "distress" proliferated in this period.

By the early fall, Bush's numbers had fallen -- not enough for the White House to panic, but enough for Democrats to yearn for some real candidates to step forward. But all they got, in addition to Tsongas and Wilder, were a few B-listers: Tom Harkin, Bob Kerrey, Jerry Brown (Democrats in California were thrilled to learn he wouldn't be running for Senate there in 1992) and Clinton. Polls showed that Democrats wanted another choice -- someone, anyone -- and they seemed close to getting their wish when Mario Cuomo, a national Democratic hero since his convention speech in 1984, suddenly said he might run. For the final 10 weeks of 1991, the Democrats ignored their own candidates and focused on the New York governor, who waited until Dec. 20 to announce -- as his plane idled on a runway in Albany -- that he wouldn't run. Bush's poll numbers were now falling under 50 percent, but Democrats were again disheartened: Could they really beat Bush with one of these guys?

In the next phase, which lasted until late January, the party began warming up to Clinton, who was boosted by a wave of significant endorsements, raised some serious money, and impressed the faithful with his communication skills. Then came the scandals: Gennifer Flowers, the Vietnam draft, and all of the others. Clinton gutted it out and Democrats, unwilling to nominate Tsongas (who had emerged as his chief rival) or Brown (who became Clinton's new chief rival when Tsongas suspended his campaign), ended up sticking with him. But they weren't happy about it. In the days before the Illinois primary, in which Clinton crushed Tsongas, Roland Evans and Robert Novak reported that:

[The prevailing view is that] Democrats "are building their November coffin right this minute here in Chicago," as an office-holding Cook County Democrat told us. They cannot stop, he said, because they don't know how, and there is no party authority to tell them.

The only way out of the coffin now, he went on, would be an unexpected upset of Clinton by former Sen. Paul Tsongas next Tuesday in Illinois or Michigan. Otherwise the lid on the coffin will be nailed shut, a ghoulish gift for George Bush on Nov. 3.

Tsongas suspended his campaign after Illinois, at which point Clinton seemed to win the nomination by default. But this reality so disgusted Democratic voters that Brown -- in one of the biggest primary upsets in the modern era -- shocked Clinton in Connecticut, the next contest. That set up a suspenseful two week run-up to the New York primary. Clinton, the consensus went, would be forced from the race with another loss -- at which point Democratic leaders would be left to anoint a new candidate. Tsongas pledged to jump back in the race if Clinton was defeated. Despair among Democrats was off the charts: Bush was looking more and more beatable -- but not if Clinton was their candidate. He would, they believed, be opened up "like a soft peanut" (in the words of Kerrey) by the Republicans in the fall.

The Chicago Tribune summarized the Democratic race this way as the April 7 New York primary approached:

Some day, historians reviewing pivotal events in this strange Democratic presidential campaign will reach the month of April and ask, "How did they get themselves into this predicament?"

Halfway through the primary season, the Democrats have a front-runner with the stability of a sailor on shore leave and an amazingly changeable challenger whose campaign runs on a very volatile fuel - resentment.

After a grueling two weeks, Clinton fended off Brown. The nomination would be his. But Democrats were hardly reassured. And their frustration only intensified over the next two months, as voters who wanted Bush out but who were repulsed by Clinton began flocking to the burgeoning third-party candidacy of Ross Perot. By the end of May, Perot and Bush were running neck and neck, each with nearly 40 percent in polls. Clinton was barely breaking 20. In the final Democratic primaries of May and early June, there was real surprising suspense: How many write-ins would Perot receive? (The answer: a lot.)

Compared to this ordeal, the insults Romney is now facing are nothing. Clinton's own party was writing him off until weeks before the convention in 1992. In hindsight, it all seems foolish: We're talking about Bill Clinton, for God's sake -- of course he was able to make everything right in the fall. But that's just the point: Bill Clinton only became Bill Clinton in the summer and fall of 1992. Until that point, his fellow Democrats saw him only as the severely flawed product of a severely flawed field -- and desperately wished they could go back in time and recruit a real candidate for the race.

It's hard to imagine now, but Romney's story could play out the same way. He may not win the GOP nomination, but he could. And if he does, he could absolutely beat Obama if economic anxiety is still high. And if he does that, we'll all look back at this point in the cycle and wonder why we ever doubted his strength as a candidate -- he's Mitt Romney, for God's sake!