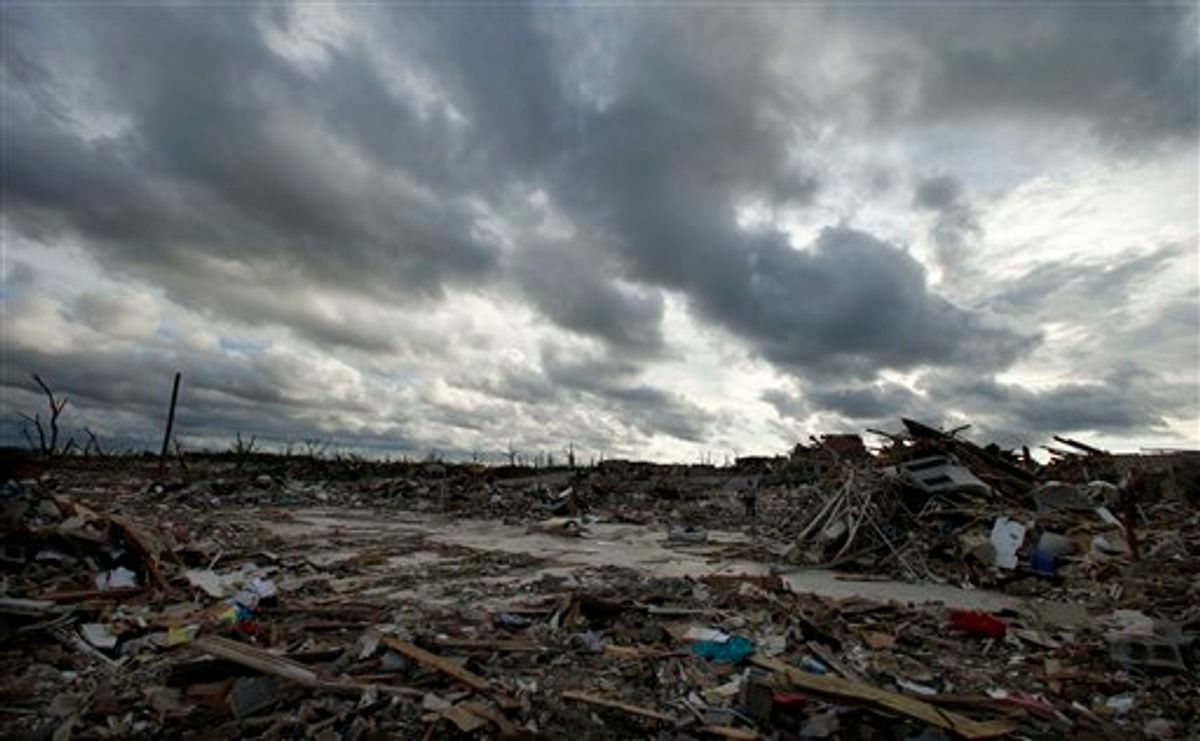 Storm clouds pass over the devastated Greenbriar Nursing Home in Joplin, Mo. Wednesday, May 25, 2011. Eleven residents of the facility died when an EF-5 tornado tore through much of the city Sunday, damaging a hospital and hundreds of homes and businesses and killing at least 122 people. (AP Photo/Charlie Riedel) (AP)
--

More than 230 people remain unaccounted for four days after the deadliest single tornado in more than six decades tore through the middle of Joplin, Missouri officials said Thursday.

Officials released a list of names, and Andrea Spillars, deputy director and general counsel for the Missouri Department of Public Safety, urged any survivors on the list to check in.

Officials said previously they believe people who are unaccounted for aren't necessarily dead or trapped in debris. They say many are probably safe and but failed to tell friends and family where they are. Cell phone service in Joplin remains spotty.

"Our goal is to get that number to zero," Spillars said of the missing. "We will dedicate as much state resources as needed around the clock to ensure those families who have loved ones that they cannot find are connected."

But Spillars also said officials know some of the people on the missing list are dead. She wouldn't say how many or say when names of the deceased would be released.

One example of the potential overlap: 12 residents of the Greenbriar Nursing Home are listed as missing. But nursing home administrators reported earlier that 11 people died in the tornado; only one resident was known missing.

The death toll rose Wednesday to 125 people, not all of them identified, and officials have estimated more than 900 were injured.

Some families have complained about not being allowed into the morgue to try to identify missing relatives. Asked about that Thursday, Don Bloom, the deputy commander for family assistance for the mortuary team, said "the process has to take it's time. We have to be 100 percent accurate."

Search-and-rescue teams have made multiple sweeps through the destruction, using dozens of dogs and listening devices in hopes of picking up the faint sound of anyone still alive beneath the collapsed homes and businesses. No new survivors have been pulled from the rubble since Tuesday.

Among those still missing is 16-year-old Lantz Hare. He was driving with a friend who said the two tried to take cover in the parking lot of a grocery store. The tornado shattered the windows and crumpled the car, and Lantz's father, Mike Hare, found his son's backpack in the wreckage.

Mike Hare has called hospitals from Dallas to Kansas City and taken dozens of calls offering advice, prayers and hopeful tips. None of the calls came from Lantz or offered any hope he might still be alive. But Hare said he'll keep searching until he finds his son.

"We know he's hurt somewhere," Hare said Wednesday, his voice breaking. "We just can't sit and keep calling. You've got to be moving."