In a state where keeping taxes low is holy writ, there's nowhere to go but down when the economy tanks 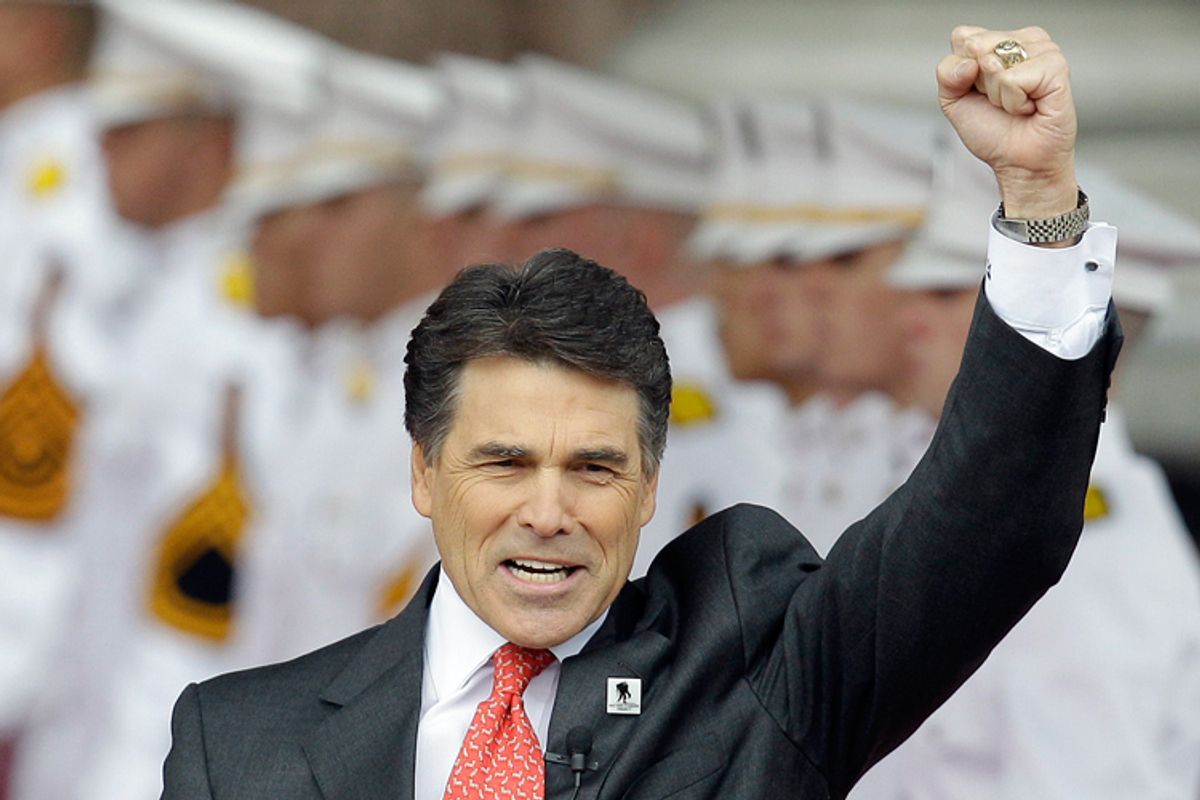 The news that Texas Governor Rick Perry might consider running for president is sure to give dispirited Republicans a huge jolt of energy. If Perry throws his Stetson into the ring, the GOP would have a candidate that both party elites and grass roots Tea Partiers could get excited about. Rick Perry is a social and fiscal conservative who can raise a lot of money and has great hair. What's not to like?

But for the country as a whole, the possibility that Gov. Perry might actually win the Republican nomination and go on to defeat Obama should offer a little less reason for cheer. Does the United States really need a president who will do for the whole nation what he has done to Texas? Didn't we already try that once?

Let's outsource some commentary to Barbara Bush, mother of the last Texas governor before Perry. In an opinion piece published for the Houston Chronicle on February 5, warning against new cuts to education funding, she wrote:

Our schools are in crises: We rank 36th in the nation in high school graduation rates. An estimated 3.8 million Texans do not have a high school diploma. We rank 49th in verbal SAT scores, 47th in literacy and 46th in average math SAT scores. We rank 33rd in the nation on teacher salaries.

"A lot of the things we are doing arguably aren't priorities for the people of Texas," he said. "People could stake me and Gov. Perry on the ground and torture us, and we still would not raise taxes."

That's Texas: Don't even think about messing with taxes! And so, the inevitable result: This week Texas legislators took a big step toward resolving the state's financial problems by approving a new budget with $15 billion in cuts "to all levels of state government, including health care." $4 billion of those cuts will hit public education.

So, to recap: Texas schools are in crisis, but the government's response to a budget shortfall is to cut funding for education even further. It doesn't take someone with good math SAT scores to figure out what's going to happen next.

Once upon a time Texas prided itself on what it called the "Texas Miracle." The state initially didn't get hit as hard by the recession as other parts of the county, a fact that legislators claimed was due to its low-regulation, low-tax, business-friendly culture. During Rick Perry's re-election campaign last year, the governor boasted that the state had "billions in surplus." Less than two months later, however, the news of a gaping deficit made the miracle look a bit less wondrous, as Paul Krugman was quick to observe:

But reality has now intruded, in the form of a deficit expected to run as high as $25 billion over the next two years.

And that reality has implications for the nation as a whole. For Texas is where the modern conservative theory of budgeting -- the belief that you should never raise taxes under any circumstances, that you can always balance the budget by cutting wasteful spending -- has been implemented most completely. If the theory can't make it there, it can't make it anywhere.

Krugman is not exaggerating. Texas ranks 49th out of all 50 states in per capita state tax burden. There is no fat left to cut. When revenue collapses because of an economic downturn, what little social services remain must be gutted. And it's only going to get worse, because Texas' population is growing, and the demands for services will continue to rise.

Texas is clearly undertaxed, and so is the United States. The theory that low taxes and business-friendly regulations would keep everything humming smoothly appears to have been disproven by recent events. We'd all be a lot better of without having to see that theory proven again, at the national level.